The headline commitment is to make Europe the first climate-neutral continent by 2050 (while conflating the EU with Europe may seem like over-reach by the Commission, it should be remembered that other European countries, most recently Switzerland, either participate in or are linked to the EU Emissions Trading Scheme and the UK government’s preference is that it will remain associated after Brexit). 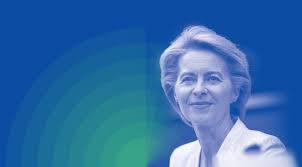 Ursula von der Leyen, then the German Minister for Defence, emerged as the surprise choice of the European Council leaders at their meeting on 21 June 2019 following their inability to agree on any of the Spitzenkandidaten. After an amazingly short period to read herself into the brief, she presented her Political Guidelines for the new Commission and summarised these in her oral presentation as part of her confirmation hearings in front of the European Parliament on July 16 2019.

Leaders of four of the Parliament’s political groups (the EPP, S&D, Renew Europe and the Greens, sometimes called the pro-EU parties to distinguish them from the more Eurosceptic parties both on the left and on the right – it is a handy tag though I am not comfortable using that description which is inherently exclusionary) had attempted to come together and, for the first time, to forge a common political platform and a common candidate for the Commission Presidency.