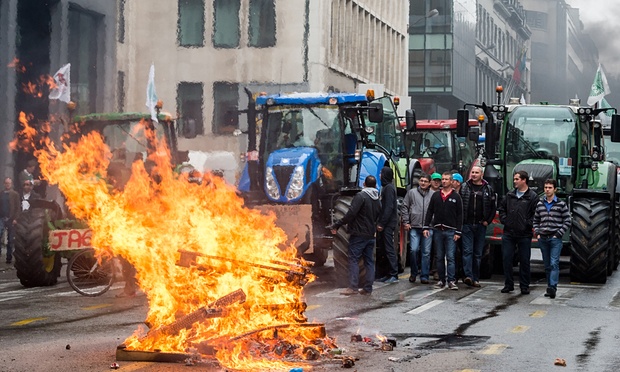 On 7th September, around 5000 European farmers demonstrated on the streets of Brussels due to falling dairy and meat prices. The demonstrators demand, amongst others, a review of the intervention system on the milk market, temporary reinstallation of milk quotas, some early direct payments to solve liquidity problems and a marketing fund assisting to sell agricultural products outside the EU.

While reading the news, an agricultural economist might have the following fundamental questions in his/her head.

1. The end of the quota system, an issue on the European policy agenda for many years, has resulted in limitless production, especially in countries with comparative advantages. However, it seems this crisis was very much unexpected at the Commission despite their economic studies dealing with the post-quota European milk market. Why are we so shocked about the simple fact that increasing supply decreases prices?

2. Farmers are complaining that the price of milk has just fallen dramatically and they are producing loss. Has anyone seen any similar complaints in 2014 when European milk prices sky-rocketed and European milk producers had high revenues? Has anyone asked them to contribute to the costs of the CAP because they were well-off? It seems very strange, especially when compared to other industries, that the CAP should immediately compensate farmers in bad times but do not compensate consumers in good times.

3. The solutions suggested so far are for the short run and appears to show signs of a ‘fire-brigade’ policy making. Reinstallation of quotas? Capping milk production? Increasing intervention prices? Shall we go back to the 80’s when these questions were first raised?

4. It is also bad news that European milk farmers do not seem to have decent risk management tools (nor do the CAP, anyway). Such crisis can happen anytime in global markets and without risk management (e.g. insurance, futures markets, etc.), farmers will always be on trouble. Milk futures, anyway, have just started to go upwards in both European and New Zealand markets.

5. As well discussed in a recent post by Alan Matthews, there is nothing like one price in the European milk market. 30 pence per litre for milk means different levels of income or loss across the EU. Therefore, setting a single price for milk will have different impacts on European milk farmers.

6. From the theoretical point of view, right after the acceptance of the latest CAP reform, it seems the CAP immediately fails to reach its first new objective – food security. It is very hard to imagine how European agricultural policy can contribute to the ‘access’ dimension of food security in times of such volatile agricultural prices.

7. Finally, this situation seems to be another sign that if we leave the market regulate itself, it usually ends up in scandals. The question here is whether the CAP really wants markets working efficiently (and yes, this will mean losses for some groups) or the CAP remains a social policy and do not let one single farmers suffering losses regardless of their efficiency levels.

Meanwhile, the European Commission announced a comprehensive support package worth €500 million to help solving the milk crisis. In addition, new storage schemes are planned to be set up, while measures will also be taken to boost exports outside the EU. After such life-saving surgeries, however, it would be good to advise a new lifestyle to European agricultural policy.