The Cyprus Presidency yesterday circulated its second revision to the MFF negotiating box, this time inserting some figures for the individual MFF headings for the first time.

It is a cautious document in its attempts to balance the very different interests of the member states as they try to reach agreement on the MFF at the special November European Council meeting. Agricultural spending escapes lightly in the Presidency proposal which shows where budget reductions in the proposed 2014-2020 MFF might fall.

The preamble to the document states that it presents savings across all Headings of the MFF amounting to at least €50+ billion (this is in comparison to the Commission’s revised MFF proposal in July 2012). However, it goes on to note:

According to the assessment of the Presidency this is a starting point for delegations in order to reflect on the effects of reductions. More sizeable reductions are needed in order to reach a compromise. Further reductions will require even bigger trade-offs and the need to prioritise between policies and programmes. This is the reason the Presidency has presented a floor for reductions but avoided introducing a higher ceiling. At the same time, the direction of further reductions is indicated by X’s in the text.

Where the savings are made

The identified savings in the text across the first four MFF Headings amount to €35.5 billion. Assuming that the Administration budget cut (Heading 5), where no figures are given, is the same proportionate amount (3.7%) as for the other Headings in the MFF, the total reduction as compared to the Commission’s July 2012 revised MFF proposal would be €38 billion.

In addition, some savings in the expenditure items outside the MFF (emergency aid, Globalisation Fund, European Development Fund, solidarity fund, flexibility instrument, large-scale projects) are proposed. The biggest item here would seem to be the transfer of expenditure of over €7 billion on the International Thermonuclear Experimental Reactor (ITER) and the European Earth Monitoring Program (GMES) from outside the MFF to Heading 1a Competitiveness, thus effectively reducing the planned funding further under that heading by that amount.

A reduction in the reserve for agricultural crises from €3.5 billion to €1.5 billion is also proposed. The Danish Presidency version of the negotiating box in June 2012 had already included this under Heading 2 rather than keeping it outside the MFF, so a large element in the proposed reduction in Heading 2 (market-related expenditure and direct payments) is due to this reduction in the crisis reserve. This may represent a view that future trends in global agricultural markets present less of a threat to price and income collapse than foreseen twelve months ago, but it is sure to attract criticism from farm groups.

The reductions proposed to the CAP budget are smaller than the average (-1.9% compared to -3.7% for the MFF as a whole) and the cuts to Pillar 1 direct payments smaller still. The cuts to Pillar 1 direct payments would take the form of annual degressive reductions of at least 0.27% per annum, or a total of 1.3% over the seven-year period. While the amounts involved are small, the idea of including an annual degressive element opens the door, for the first time, to the perspective that these payments are not guaranteed for ever.

Presumably, if the greening percentage is kept as a constant proportion of the Pillar 1 ceilings, this degressive annual cut would apply equally to the green payment as to the basic payment, which seems to run counter to the overall philosophy of greening the CAP.

A comparison of the cuts proposed to the various Headings in the MFF is shown in the graph. In constructing this graph, the transfer of the Connecting Europe facility from the Cohesion sub-heading to the Competitiveness sub-heading within Heading 1 as proposed in the negotiating box is taken into account (otherwise, there are large changes shown for these sub-headings relative to the Commission’s July 2012 MFF proposal). The graph also takes account of the fact that the Competitiveness sub-heading must now also pay for ITER and GMES, thus the actual cut here is larger than would otherwise appear. Assuming expenditure on ITER and GMES of €7.2 billion, then the Competitiveness sub-heading falls by 5.9%. Finally, the spending on rural development in the Commission’s July 2012 MFF proposal is estimated based on the MFF figures in that document, so the reduction shown for rural development may be a little on the high side. 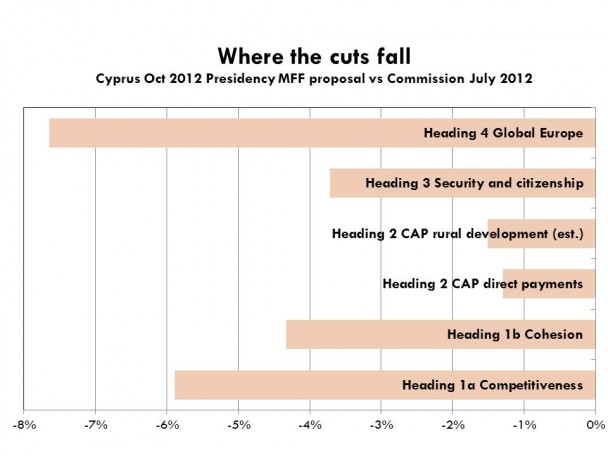 The pattern of cuts shows the path of least resistance. The largest cuts would be experienced by beneficiaries outside of Europe, with the competitivness budget (including research) also badly hit. Cohesion spending would also take an above-average cut, with the CAP budget emerging relatively unscathed.

In other ways, the text on the CAP also remains largely unaltered since the Sept 2012 version of the negotiating box. One advance is that figures are now inserted on how much flexibility would be allowed to member states to shift resources between the CAP Pillars, but still with a range of uncertainty. Member states would be allowed to shift up to [10 to 15%] of their Pillar 1 ceiling to Pillar 2 (where the square brackets indicate that the precise figure remains to be agreed), and it had previously been agreed in the negotiating box that no co-financing in Pillar 1 will be required for the amounts so transferred.

The situation regarding reverse modulation remains more contested, in particular whether the option to move funds from Pillar 2 to Pillar 1 should be reserved only to those member states with low average direct payments per hectare in Pillar 1 or open to all member states. The amounts would be limited to up to [5 to 10%] of the amount allocated for EAFRD programming. The total reduction in Pillar 2 spending in countries which engage in reverse modulation will be greater because the national co-financing of the transferred amount would also lapse.

Assessment of the Cypriot proposal

The revised negotiating box illustrates the trade-offs involved in reaching agreement on the MFF. The Cypriots have opted to show what the impact of a relatively limited reduction in the overall MFF budget would involve for individual Headings (so although all Headings face some reduction, they do not propose a linear cut across all Headings). However, they are well aware that the size of the overall reduction that they have proposed (around €50 billion in total) is unlikely to be sufficient to satisfy the demands of the net payer states, and that the numbers will be further reduced as the negotiations progress. However, they opted not to show the impact of a higher overall reduction at this stage.

At the same time, the impact of further cuts is clear. Already, the cohesion countries are smarting at the loss of over €5 billion from the cohesion budget in the Commission’s July 2012 MFF revision, and now face a cut of a further €17 billion. For example, the cap on the maximum amount of cohesion funds that a member state can receive is reduced from 2.5% of GDP to [X to 2.36%] of GDP.

In addition, the Presidency has clearly made no progress on the issue of how the MFF should be financed. In a somewhat exasperated footnote, the document observes that:

In the Presidency’s view there is a need to reach a political understanding on the way forward [on the own resources arrangements] in order to ensure that all sides feel that the revenue system is consistent with the Treaty of the European Union.

This text and the associated numbers will now be discussed at the Committee of Permanent Representatives (Coreper) tomorrow Wednesday, October 31, when Member States are expected to express their initial reactions to the Presidency’s suggestions. The Commission has issued an abrupt press statement stating that it does not support this version of the negotiating box. Watch this space…