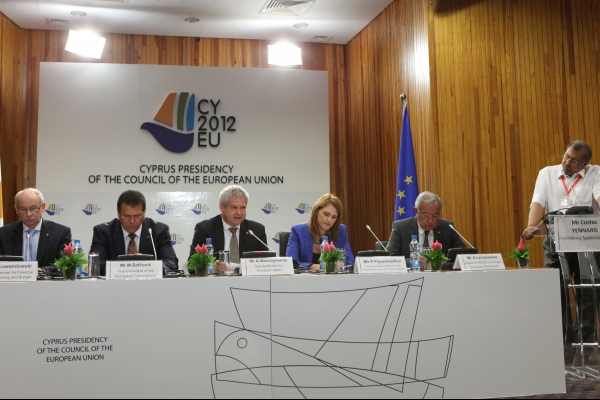 The first initiative in what member states hope might be the final push to get agreement on the next Multi-annnual Financial Framework by the end of this year under the Cyprus Presidency took place yesterday (30 August) when the Cypriots hosted an informal meeting of the General Affairs Council in Nicosia.
During July, the Cypriots held a series of bilateral meetings (‘confessionals’) with the 27 member states and Croatia. Based on these discussions an Issues Paper was prepared for the meeting. This paper reported briefly on the outcome of the bilateral consultations, presented the Presidency´s proposed orientations for reflection by the delegations, and included a brief reference to the next steps.
The Issues Paper

The summary of the bilateral consultations is a daunting list of areas of disagreement, ranging from the overall size and composition of the next MFF, the sources and make-up of revenue sources, to more specific concerns on cohesion policy, the CAP, and other expenditure headings (this earlier post discusses the state of play on some of these issues at the beginning of the summer).
Of particular interest are the Presidency’s conclusions drawn from these bilateral consultations which were put forward as ‘orientations’ for the informal Council discussion (the bolding in the quoted extracts is mine).
On the overall level of the MFF:

The bilaterals have confirmed that an agreement cannot be found at the overall level proposed by the Commission in its proposals, as updated on 6 July 2012. The Presidency recognizes that it is, therefore, inevitable that the total level of expenditure proposed by the Commission, including all elements inside and outside of the MFF, will have to be adjusted downwards.

On the level of spending under each heading:

Given the diverging views on which headings to be reduced, the Presidency considers that all headings need to be subject to reduction efforts, taking into account the overview of delegations’ key priorities and concerns.

On the level of CAP spending (Heading 2):

Concerning the Common Agricultural Policy, given the sharply opposite preferences of the Member States, the contribution to the overall reduction has to come from both Pillars and further discussion is needed regarding the relative priority between them. At the same time, while respecting the distinct objectives of the two Pillars, it would seem appropriate to provide for somewhat more flexibility between them, possibly in both directions. The principle of a more equitable distribution of direct support is accepted, while further consideration is required on the ambition and speed of convergence as well as on degressivity. The Presidency understands that the majority of Member States consider that the distribution key for rural development is a necessary part of the overall agreement on the MFF.

Outcome of the informal Council
Divergent views on what the meeting achieved were expressed in the official press release and by independent commentators (see the Financial Times story here and the Euractiv summary here). The official press release was upbeat, stressing the participation of the Parliament’s negotiating team in the meeting, and the commitment of all member states to reaching an agreement by the end of the year. The independent observers were more circumspect, stressing the extent of the diverging views. The Financial Times quotes the Cypriot diplomat chairing the meeting as saying: “We realised that the distance between the member states is even wider than we thought”.
Next steps
The next step by the Presidency will be the presentation of a revised version of the Negotiating Box including ranges of figures/some figures for the September Council meeting. Council President von Rompuy has called an extraordinary summit of EU heads of state and governments in November which will focus solely on the European Union budget for 2014-2020, with a view to trying to reach final agreement at the European Council meeting in December.
But as the Financial Times article observes:

Many diplomats believe that only heads of government will be able to cut through the complexities of the budget to deliver a compromise. But with the eurozone crisis dominating the agenda, there may be little time to do so. “The difficulty is do leaders have the bandwidth to focus on this with everything else going on?” one diplomat says. “This is usually the biggest negotiation in town.”