This week, the French national federation of environmental NGOs, France Nature Environnement (FNE), federation of hundreds of environmental groups, launched a poster campaign that raised considerable controversy. It showed, in a rather shocking way, some (real or alledged) environmental damages caused by agriculture. Adding insult to injury, this took place a day before the annual “salon de l’agriculture”, a big national fair in Paris that attracts close to 1 million visitors and where every politician goes to cuddle farmers. All farmers’ organisations became mad, and claimed that the campaign indiscriminately accused farmers of being polluters. The French Minister of agriculture, Bruno Le Maire talked about “a scandal”. Opening the agricultural fair, President Nicolas Sarkozy said that the poster campaign was a “loathable”, and compared FNE (for some strange reason) to the National Front taking over ongoing debates on the status of islam. Probably under some political pressure, the Paris metro advertising branch refused to display the posters (invoking bizarre reasons like the need for Quentin Tarentino’s approval on the “kill bees” poster below…). Was the choice of controversy by environmental NGOs a good one? How will it affect the public opinion on farming and environment? Could it lead to put pressure on the government for a more environmentally friendly CAP? Or will this damage environmental groups’ influence on farm policy design? 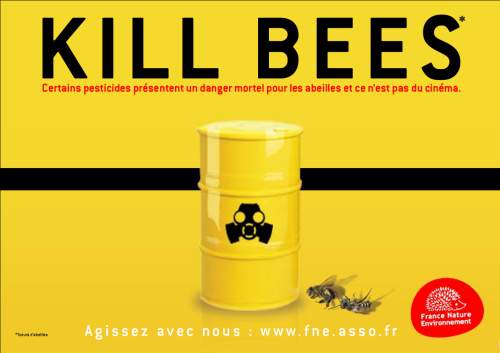 2011 started as a good year for farmers’ image in France. Since the 2009 farm income crisis, farmers’ organisations have done an excellent communication job. Grain growers were seen as villains in 2008 when the price of baguette was raised, and when their high income that particular year became public knowledge. Not wasting the opportunity of a good crisis, farmers’ organisations highly publicized the fall in income that took place in 2009. Even grain producers surfed on the wave of sympathy triggered by images of dairy producers spreading their milk in their fields. The conservative farm lobby also strengthened its political influence in 2010. Many arable crops farmers had turned against the Sarkozy government, when Michel Barnier (then minister of agriculture) reallocated some €1.4 billion Single Farm Payments to extensive grazing under the Health Check provisions. Threatening to vote against the candidate Sarkozy, the traditional farmers unions regained political influence. One year before the election, those farmers that are Members of Parliament and Senate tightened their grip on the future candidate. Recent government decisions, from the extension of tax cuts on biofuels (which the government initially opposed to) to the refusal to release information on individual farm payments, show evidence of a hunt for farm votes. So does the much advertised introduction of farm price volatility in the G20 agenda, currently under French presidency. In the same time, president Sarkozy pleased the most conservative farm groups by saying that, he too, was fed up with environmental constraints. Since his speech, the zeal of the ministry of agriculture in the environmental area has become even lower; and in Brussels, French resistance to any greening of the CAP more apparent. 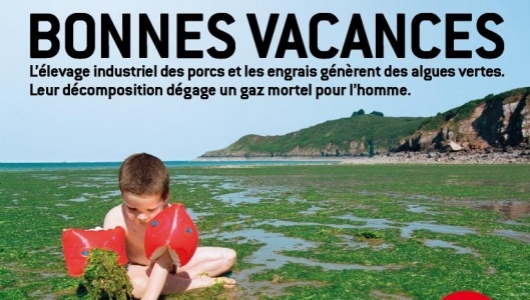 The FNE poster that shows a child playing in those seaweeds that flood French seashore is a risky bet in terms of communication. The image is provocative and, true, quite unfair: these seaweeds expand because of nitrates leaked by agriculture, but also because of phosphorus which mostly come from households (detergents). By turning the tourism industry as well as local politicians against FNE, such a campaign could backfire.

Nitrates and seaweeds were chosen as a campaign theme probably because it is one of the few areas where environmental problems find a large echo in the public. Indeed, some 90 000 tons of these seaweeds were harvested last year at a high cost. In some bays, hotels are closing since tourists can no longer bear the smell. Local dwellers have to purchase mineral water because of nitrates. However, even in this favorable context, environmentalists have not had a lot of success at curbing government policy.The government’s plan to fight seaweeds in Brittany released a year ago includes money for collecting and disposing seaweeds but is lax on farmers. This follows successive programs paying farmers for reducing their nitrate leakage, which have cost billions of euros since 1994. Both the Court of auditors as well as Finances’ General Inspectors’ audits have repeatedly concluded enforcement was poor and that such payments have had little effect on water quality (to say nothing about the fact they were against international commitments regarding the polluter-pays principle and that their compatibility with EU Treaties was unclear). France was condemned by the European Court of Justice for non respect of EU directive on water quality in 2001, and has since then been threatened numerous time by the Commission. It was on the verge of being fined again in 2007 and 2010 and got away by promising reforms. In brief, regarding water quality, French environmentalists are simply grateful that a non-elected, European body like the Commission puts some pressure on their government, as other ways do not work much. In other areas than nitrates, the public opinion is even less keen at questioning farm policy, except perhaps on GMOs and on bees mortality, two other FNE campaign themes. 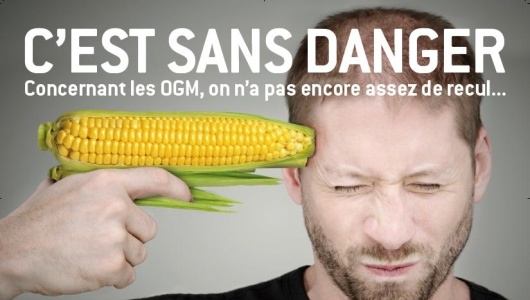 One may wonder why FNE took the risk of engaging into such a controversial campaign. During the last few months, most governments decisions have been steps back, away from original environmental commitments made in a large scale consultation called the “Grenelle” of the environment in 2007-08. Perhaps considering that they had little to lose given their loss of influence on the French farm policy, environmental NGOs seem to have decided to try the rough way. Another explanation is that the farm lobby has been communicating a lot on how French agriculture was sustainable and good for the planet, thanks to no-tillage techniques (the solution to carbon emissions), precision farming (no more pollution) and biofuels (labelled “flower power” in advertisements played repeatedly on national radio). Maybe FNE saw no other way to stop the greenwashing.

It is unclear whether the FNE campaign will manage to rally public opinion and put more pressure for a more environmentally friendly agricultural policy. The campaign might have unwanted effects. It was risky, and relations with farm groups will be affected, including groups that have tried to get closer to environmental NGOs. But from an environmentalists’ point of view, one might consider that other strategies had little chance to curb the French position and to lead to a greener CAP, anyhow.