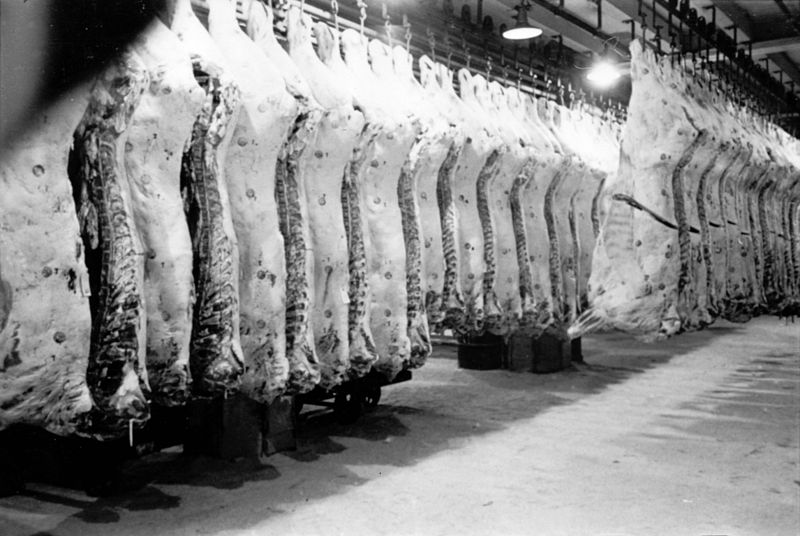 Growing price volatility on agricultural markets has renewed focus on the role of market support instruments. In successive CAP reforms, the role of market instruments has changed from essentially determining the market price received by producers to providing a market safety net. Intervention prices are set at low levels which ensure that they are only used in times of real crisis.

The graph below illustrates the extent of support price reductions which have taken place for different sectors. These price cuts allowed the drastic decrease of public stocks in the EU between the early 1990s and recent years, which has in turn reduced the budget pressure stemming from overproduction.

However, intervention measures have not been abolished. The available market measures were used in the dairy market from January 2009 to beginning 2010 to limit the drop in EU prices. The purchase of public stocks provided a buffer to mitigate the downward path of prices, although their accumulation also had the effect of delaying the pace of price recovery to some extent.

To understand the present situation and the changes proposed in the June political agreement on the CAP2020, the table below shows the intervention arrangements as they were when the Council gathered together all the common market organisation regulations into a single CMO regulation in 2007. There was no single model of public intervention. Intervention could be open on a permanent basis or depending on market prices; it could be restricted to particular calendar months; it could be limited to specific amounts (which could include zero amounts), after which further intervention buying could take place at the discretion of the Commission using tendering procedures. Intervention prices were derived in different ways from reference prices (reference prices are fixed for products subject to intervention measures in the single CMO regulation).

Thus, with the implementation of the Health Check, public intervention is now limited to wheat at €101.31 per tonne, for up to 3 million tonnes; butter, at €2,217.51 per tonne, for up to 30,000 tonnes; skimmed milk powder, at €1,746.90 per tonne, for up to 109,000 tonnes; and beef and veal, whenever the average market price in a member State or region falls below €1,560.00 per tonne for two consecutive weeks. However, the Commission may decide to continue public intervention for durum wheat, barley, maize, sorghum, paddy rice, butter and skimmed milk powder beyond these limits if the “market situation and, in particular, the development of market prices, so requires” on the basis of a tendering procedure (Council Regulation (EC) No 72/2009, Article 13(3)).

In addition to purchases into public intervention, the Commission can also open private storage aids (PSA) for butter and certain cheeses, skimmed milk powder, white sugar, olive oil, beef, pig meat, sheep meat, and goat meat. Under the PSA schemes, the products remain in private ownership and the owner receives aid to cover the cost of storage for periods specified in the contracts before they can be released onto the market. In 2011, PSAs were made available for butter, olive oil and pig meat and, in 2012, for butter and olive oil.

Usage of intervention has steadily declined; for example, no beef has been purchased into intervention since 1999. The table below, taken from the 2013 WTO Trade Policy Review of the European Union, shows the usage made of public intervention and private storage aids during the past five years. 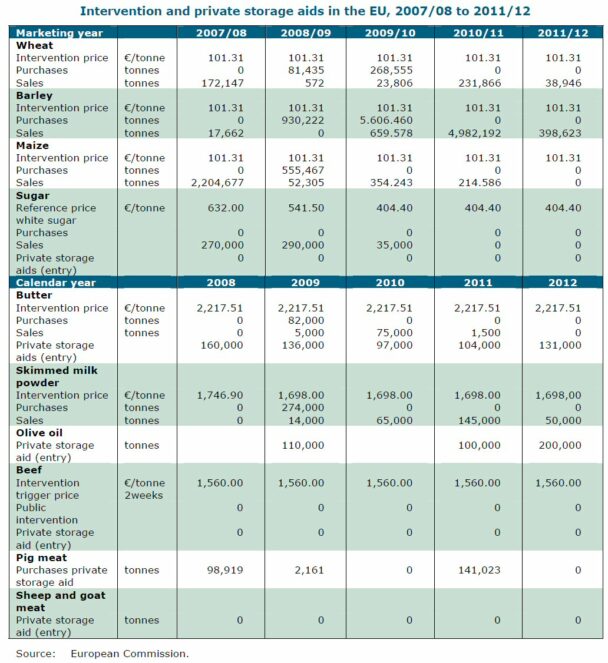 In the CAP2020 negotiations, the initial Commission proposal for intervention was to further diminish its importance by removing durum wheat and sorghum from the cereal products eligible for intervention support while maintaining the status quo in the other elements. It also proposed to remove cheeses from the possibility of private storage aid.

However, there was support among some member states and in the European Parliament to strengthen the intervention system in view of the likelihood of increased price volatility. The Parliament’s negotiating mandate included the following amendments to the Commission’s intervention proposals:

The final political agreement maintained the Commission’s proposal but with three modifications incorporating the Parliament’s position: the public intervention period for butter and SMP was extended by one month; the volume limit for public intervention for butter was increased to 50,000 tonnes; and the possibility of private storage aid is restored to PDO/PGI cheeses. The EP proposal to re-introduce intervention for durum wheat and sorghum was rejected.

Update 10 September 2013. The consolidated text of the draft CMO regulation agreed as part of the June 2013 political agreement has now been published, and two corrections should be added to the paragraph above. Durum wheat will now be eligible for public intervention at the discretion of the Commission and the safety-net intervention price for beef is raised to 85% of the reference threshold price, reflecting in part elements of the Parliament’s political position.

In addition, the new single CMO regulation will contain a general market disturbance clause under which the Commission will have the power to extend or modify the scope, duration or other aspects of measures provided for in the regulation. This provision applies to all commodities covered by the single CMO regulation. In addition, market support measures can be introduced to respond to market disruption related to animal diseases and loss of consumer confidence due to public, animal or plant health issues. To fund these measures a €400m crisis reserve is set up, funded by annually reducing direct payments, for the Commission to take action to respond to market disturbances. In the case of animal disease and loss of consumer confidence disruptions, measures can only be taken at the request of a member state and are co-financed to the extent of 50%/60% (the latter in the case of foot-and-mouth disease).

Alignment of powers with the Lisbon Treaty

A final theological point on inter-institutional powers with regard to intervention arrangements in the next CAP period should be mentioned for completeness. Prior to the Treaty of Lisbon, the Council acting on a proposal from the Commission had the sole prerogative to formulate agricultural policy.

With the entry into force of the Treaty of Lisbon on 1 December 2009, the ordinary legislative procedure applies to CAP legislation meaning that the European Parliament now has co-decision power with the Council (Article 43(2)). However, Article 43(3) spells out the one exception, namely, that “The Council, on a proposal from the Commission, shall adopt measures on fixing prices, levies, aid and quantitative limitations and on the fixing and allocation of fishing opportunities.” Read literally, this implies that key aspects of the common market organisations such as the determination of reference and intervention prices are the prerogative of the Council alone.

The Parliament’s position has been that, as an exception, this paragraph needs to be interpreted very restrictively and it has demanded a role in determining the criteria and conditions which result in the price decisions taken by the Commission and CMO management committee (which represents the member states). According to Paolo de Castro’s report on alignment of the single CMO regulation with the Lisbon Treaty: “The public intervention (including framework for the determination by the Commission of certain intervention prices by means of the tendering procedure) …. should stay at the Legislator’s level, as these elements are inextricably linked to the definition of the content of the scheme established by the Legislator and the boundaries of this regime.”

The member states, on the other hand, wanted to maintain the role of the Council to fix buying-in prices and quantitative limits for public intervention for the intervention commodities, as well as fixing the amount of aid for private storage.

In the final agreement, there have been no changes to the reference prices as proposed by the Commission and agreed by the Council in its general position. However, the Parliament has got agreement that delegated acts (which give it a greater say) will be used in changing and setting of reference prices. Parliament has also secured the use of delegated acts on the opening of intervention for beef and veal. On the other CMO measures involving the fixing of prices, levies, aids and quantitative limitations, authority goes to the Council (setting public intervention or private storage aid, level of aid for distribution programmes for fruit and milk in schools, export refunds, etc).

The use and importance of market support instruments and particularly public intervention has steadily diminished as part of the CAP architecture. The number of commodities eligible for public intervention has been reduced, limits have been placed on the guaranteed quantities, and support prices have been lowered to safety-net levels. Indeed, inflation is further eroding the real value of these safety net guarantees as reference prices have not been updated. For example, the reference (and intervention) price for cereals has remained the same at €101.31/t since 2000/2001.

The efforts of some member states and COMAGRI to strengthen the role of public intervention in the most recent CAP reform were not successful. In principle, the EU has an adequate range of tools available to address market crises and a sudden sharp drop in farm prices; the real constraint is much more likely to be the limited budget resources set aside for market crises in the most recent multi-annual financial framework (MFF).

The corollary of this is that farmers, as for businesses in other sectors, will need to take more responsibility for managing and coping with price risk themselves. This should be an important message from this reform.