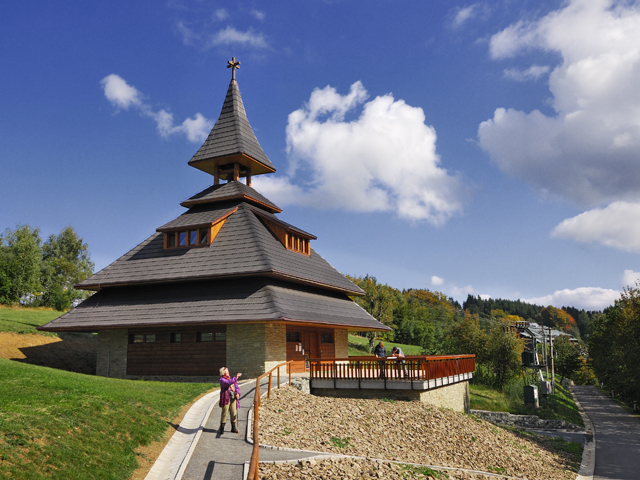 Rural development programming for the MFF period 2014-2020 seems to be a disaster zone, and it would be interesting to hear comments from those more directly involved in the process as to the reasons and implications of the huge delays which have built up.
At a recent Rural Development DG AGRI Civil Dialogue Group meeting, the Commission presented an update on the programming of the new Rural Development Programmes (RDPs) from which the table below is taken. It expects only 10 RDPs out of a total of 118 to be approved by the end of this year. Nearly all of the 118 RDPs have been submitted (2 are still outstanding), and the Commission has returned its observations on 75 of these (see table below).
So a huge workload remains. The DG AGRI estimate is that just another 15 or so RDPs will be approved by the end of March, with the remaining 93 having to wait until ‘after MFF review’. For these RDPs, adoption will be possible after 1 May 2015. So the bulk of RDPs will not be approved until 18 months or more after the start of the 7-year programming period to which they apply. 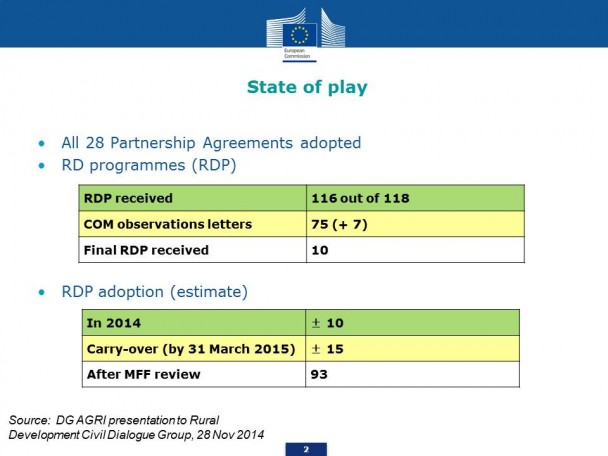 The approval of RDPs next year falls into two categories as shown in the table above. Around 15 programmes are expected to be approved under the carry-over provisions of the Financial Regulation which sets out the rules applying to the EU budget (Article 13(2)a). This allows unused commitment appropriations for which most of the stages of the commitment procedure have been completed by 31 December to be committed up to 31 March of the following year.
The condition for this to happen in the case of RDPs is that the member state has adequately taken the Commission observations on its RDP into account and that the inter-service Commission consultations on the RDP have been closed. The 15 or so RDPs in this category can be adopted between mid-February and the end of March next year.
The bulk of the outstanding RDPs must wait for the MFF review. This is the procedure set out in Article 19 of the MFF Regulation which, in the event that new programmes under the Structural Funds are adopted after 1 January 2014, allows the transfer of unused funding allocations in 2014 to subsequent years. The revision concerning the transfer of unused allocation in 2014 should be adopted before 1 May 2015. This is the reason why approval of the outstanding RDPs must wait until after that date.
Although a technical issue which will not be opposed by the legislature, a revision of the MFF must still comply with the multiannual budget procedures. It will also require a corresponding draft amending budget making available the additional commitment appropriations in 2015 which also needs to be approved. This implies that, even in a best-case scenario, most of the outstanding RDPs cannot effectively start until mid-2015.
2015 a lost year for AECMs

The transition regulation No. 1310/2013 allowed member states to undertake legal commitments to beneficiaries for a limited number of measures under their existing rural development programmes and to claim this expenditure from the new programming period in 2014. From this DG AGRI presentation to the Civil Dialogue Group, it seems that the Commission has no plans to extend this transitional regulation.
Instead, it intends to approve new RDPs only when the corresponding funding is legally available to the member states. Thus, for most farmers across the EU, this means they will be unable to enter into new commitments for agricultural-environment-climate (AECM) measures under rural development programmes until at least the second half of next year. For member states using a single application for all CAP area-based schemes, the new regulations require that all applications much be submitted just once per year and the window for applications closes May 15. So if a farmer has not been approved for admission to an AECM by May 15, he may have to wait until 2016 before he can enter. But also investment aids and other measures such as the much-emphasised business support to young farmers under Pillar 2 will be delayed until the second half of next year. Update 6 Jan 2015. Member states like Ireland are seeking a ‘letter of comfort’ from the Commission in January which would allow them to open applications for AECM and other RDP schemes prior to formal approval of the overall RDP.
It is not only rural development funding which is adversely affected by the delay in approving new programmes. Similar delays are also affecting the approval of Operational Programmes for the other Structural and Cohension Funds. Last week the European Parliament expressed its frustration with these delays. It means that, while the Juncker Commission is launching its proposals for a €315 billion investment programme with great fanfare, funds already committed to the Structural Funds for innovation and research, the digital agenda, support for SMEs, the low-carbon economy, training, education and infrastructure cannot be drawn down for at least the first half of next year even as the European economy teeters towards recession.
Top-heavy programming

I had previously described and discussed the new process of rural development programming for the 2014-2020 period in this post last January. The timeline set down in the Common Provisions Regulation was submission of RDPs three months after the initial submission of Partnership Agreements, Commission observations on the draft RDPs within three months of submission, and Commission approval of RDPs within six months of initial submission provided that the member state has adequately taken the Commission observations into account. Based on this timeline, I had projected that all RDPs should be adopted by end January 2015 at the latest.
However, I did not take account in this timeline of the provision that these time limits do not include the periods starting on the date on which the Commission has sent its observations to the member state and lasting until the member state has responded to those observations. The Commission observations on both the draft Partnership Agreements and draft RDPs could be quite extensive, in spite of the considerable amount of informal contact which took place between member states and the Commission services prior to the RDP submission, and despite the fact that each RDP must already have been through its own independent ex ante assessment.
For example, the Commission observations on the Irish RDP run to 28 pages (the link is provided by An Taisce The National Trust for Ireland) and clearly require some time for the Irish administration to prepare its reply, and during this time the clock stops ticking. So even when the process is running smoothly, the approval process requires a substantial amount of time.
While the ideas behind the new programming approach were laudable (greater coherence between the different Structural Funds, greater focus on spending on EU2020 priorities) it seems clear that the whole approach is very top-heavy and cumbersome. It may be a positive factor that the Commission services are scrutinising the draft RDPs in such detail, if this leads to better programmes. Indeed, environmental NGOs the European Environmental Bureau and Birdlife International wrote to the relevant Commissioners last week expressing concern that, given the backlog of approvals, the Commission would be tempted to rush through approval of RDPs without ensuring they met their environmental objectives.
However, we cannot afford to spend two years at the beginning of every 5- or 7-year MFF debating the structure of the policy while farmers wait for the funds. At this rate, to have RDPs approved and ready to start on 1 January 2021 in the next programming period, one should be starting on the revision of the Structural Funds Common Provisions Regulation and the Rural Development Regulation almost immediately!
This problem has been previously identified. For example, in the EU Budget Review published by the Commission in 2010, it noted:

Putting new programmes in place takes time – particularly when they are based on a partnership approach to factor in local needs and priorities. The time available between agreement on the legal texts and the start of a financing period is crucial to make this work well. In the run-up to 2007, the late agreement on the financing package squeezed this critical period. The result was that the real start of programmes was delayed, and in some cases this has had a knock-on throughout the period.
The delays in launching the programmes, enshrined complexities in the process, a very decentralised approach and the impact of the financial crisis on national public budgets led to a slow uptake of cohesion spending. A better design, faster decision making, streamlined and harmonised procedures, a clearer definition of priorities at all levels and more flexible approach to co-financing have all been identified as potential remedies.

Despite this acknowledgement of the problem and identification of potential remedies, the situation has worsened further in the start of the 2014-2020 programming period. As soon as the current round of RDPs is finally completed after the middle of next year, the European Parliament should commission an expert group to look at ways of improving the programming cycle.
This post was written by Alan Matthews