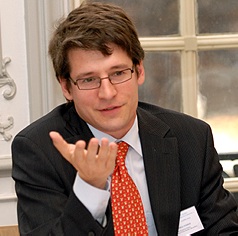 An extended guest post by Jorge Núñez Ferrer , takes a close look at the leaked commission communication on the future of the CAP. Dr Núñez Ferrer (pictured, right) is Associate Research Fellow at the Centre for European Policy Studies and has written widely on the CAP and the EU budget

The CAP 2020 reform philosophy has finally seen the light, albeit only in leaked form. A carefully drafted document contains the usual CAP rhetoric punctuated by some apparently strong deviations from past doctrine. But once the objectives and policy proposals are reduced to their basic components, much of the fizz disappears.

Looking beyond the politically correct drafting and generalisations (and the inevitable linguistic awkwardness of an English text primitively translated from the French of the original draft), one finds the following objectives and reasoning as the guiding principles and motives:

The CAP should ensure that agricultural production across the whole European Union is maintained and even enhanced.

The first reason given for this is the need for food security in Europe and globally.

The document argues that the CAP must guarantee that this productive capacity is maintained while ensuring that farm incomes are maintained, as well as ensuring that public goods produced by agriculture and not rewarded by the market are delivered.

These points are the core of the proposal, which has been retrofitted with a handful of broad generalisations on climate change and innovation.

As a core, these arguments are old, highly questionable and could as well be moblised in the defence of the status quo. The use of food security as a fundamental reason for farm income support is worrying and self-serving. If we are talking of meeting the future demand for food globally, then the best use of public money is in helping developing and transition economies to improve their agriculture and their market infrastructure. While Europe is at the frontier of yield potential, much of the rest of the world is far below and could easily increase production with low investment. R&D in agriculture focusing on crop varieties able to withstand environmental stresses would also do much good.

Looking further into the details of the proposals, we find that the most concrete proposals relate to the future of direct payments to farmers. This is important as these payments dominate the CAP budget and, as I have argued elsewhere, highly wasteful in terms of targeting farm incomes and other objectives. Direct payments are central to criticisms of the CAP by the public and by the European Court of Auditors.

At first glance, the proposals on direct payments look quite revolutionary and innovative, but on closer examination one finds that much of the current ‘first pillar’ of the CAP would remain untouched.

In a nutshell, the proposal offers the following:

– A minimum payment to small farmers

– A ceiling on payments to large farmers

– Redistribution to achieve more equity within and between regions and countries

– Only “active farmers” would qualify for payments

The reform does not mention the level of funding for the CAP, but it is clear that there is little chance of a higher budget for agriculture. If the Commission President and the Budget Commissioner are to be believed, some cuts may be proposed. However, no cut has been proposed by the Agricultural Commissioner, nor does the Communication make any reference to it. This either reflects a lack of common view on this between the Commissioner’s or a way to keep the door open for the Agricultural Commissioner to distance himself from this position if needed. In any case, given the structure of the proposal one cannot see any hint of a cheaper budget, nor do the proposals seem to be in line with reductions.

The big flaw in the direct payment proposals is that it is suggested that the new basic income payments will, over time, become a flat rate payment across the EU per hectare with some limited differentiation permitted. This tells us that European Commission still measures the need for income support in terms of hectares. The notion that incomes (and thus the need for income support) are in fact related to the profit and loss accounts of farm businesses seems strangely foreign to the Commission. In the logic of the CAP, the need for income support is is apparently directly proportional to the size of the farm. With each additional hectare, a farm requires additional income support. Even so, the proposal for a ceiling on payments to very large farms implies that this proportionality has a limit.

As usual, the document pays lip service to the massive income discrepancies within the agricultural sector which cannot be handled in any efficient way by direct payments per hectare. Again we are supposed to swallow the idea that incomes are low right across the farm sector – a myth has been proven wrong repeatedly by the OECD and a number of other studies. Household incomes of farms are often well above those of non farming households. Considering that the principal objective of the CAP is to maintain farm household incomes, it is staggering that Eurostat does not even try to measure them.

Under the proposals farm households at the high end of the income scale will still get the lion’s share of income support, despite the Commission’s acknowledgment that something needs to be done to guarantee some basic level of payments to the smallest. The regressive nature of the CAP will decrease only very slightly.

Furthermore, by allowing a still undefined level of flexibility in the level of basic payments, inequalities between countries and regions will persist, and there is a high risk that little will be left in the pot to finance ‘green payments’. The size of the green payments will depend largely on the gap between the future basic payments and the total size of the budget. Maybe the thought is to move step-by-step, but no mention is made of a phasing out basic payments for farms not in financial difficulties. In the context of a decreasing overall budget the gradual flattening of basic income payments (but with no phasing out) could well mean very little, if any, spare money for green payments.

A genuine system of green payments would reflect the actual environmental performance of agriculture on the ground. Yet there is little chance of such a rational policy as it would require much more flexibility in allocating funds across countries. The political focus on national budget allocations will mean that as payments are flattened between countries, there will be a lot of slack in countries where payments were high (old member states) and none were they were low (new member states).

The money released by the leveling out of direct payments needs to be redistributed among member states but and there is no proposed mechanism to allow for that. The revolutionary elements of the CAP 2020 document thus seem to be stillborn at the stage of this document. It will need a massive political impulse to achieve the goals and it hard to find it in the document.

To achieve the objectives set out in the communication, basic income payments ought to be phased out except for poorer farms (based on a means test of actual household incomes). This would enable the green payments to grow and would allow more of the funds to flow to new member states.

By attempting to keep basic “income” payments for all, we are facing the preservation of the current distribution of aids and so we cannot expect the policy outcomes to be any different. We might see symbolic increases in payments to small farmers, symbolic ceilings for larger ones. The proposal lacks the necessary release valve to achieve its radical objectives.

It is difficult to have any opinion on the rural development proposals, as it will depend largely on the actual measures that will be introduced. The calls for monitoring of outcomes and better policy integration are nevertheless welcome. The proposal calls for the less favoured area payments to be moved from the rural development pillar into the direct aids pillar. This is not a problem per se, though it will reduce further the margin for manoeuvre in terms of the new green payments and no attention is paid in the proposal to the main failings of the current LFA policy, namely a lack of proper justification for support as raised by the Court of Auditors.

One final important point is the introduction of risk management mechanisms. A “toolkit” is be proposed, the shape of which will be very important. Risk management needs to allow for private schemes to operate with a public element for uninsurable losses. For the moment, the wording is too vague to make any judgment and what the role of the private sector will be.

Despite falling for the spurious global food security arguments, the CAP 2020 document shows many good intentions, but fails to to offer viable solutions (such as co-financing) while leaving the door open to a large number of options, including some production-linked support and keeping basic income support payments for all. The likelihood is that it is simply window-dressing and will lead to no significant changes to the distribution of aids nor the outcomes of the policy.

In the context of the current financial crisis and the enormous pressures on public finances, the leaked draft fails to make a convincing case for why agriculture needs to be so heavily supported. On the contrary, the document implies that at a time when everybody else must tighten their belts the CAP is entitled to more financing. It even claims that the CAP is contributing to the existence of a “territorially and environmentally balanced EU agricultural sector”. This assertion that lacks any foundation in fact. In my view, we need a reform of the CAP exactly because it is neither balanced nor cost effective. Ultimately Commissioner Ciolos has shown us that he is politically unwilling to grasp the redistributive nettle required to reform the CAP in a meaningful way.

In a nutshell, it is clearly unrealistic to keep a basic payment for all (even if flattened), introduce a strong new green payment, and at the same time to redistribute money and hold out against co-financing and a reduction in the budget.