Alan Swinbank of Reading University in the UK has been doing some detective work to understand the dramatic fall in the scale of the EU’s trade-distorting support (reported in the Amber Box under WTO rules) in the EU’s latest notification to the WTO which covers the marketing year 2007/08. His findings are reported in the latest issue of the online Estey Centre Journal of International Law and Trade Policy.
As previously reported on this blog, the EU figure for Amber Box support (called the Current Total Aggregate Measure of Support in WTO jargon) fell from €26.6 billion in 2006/07 to €12.4 billion in 2007/08. The significance of this reduction is clearly shown in the figure below. 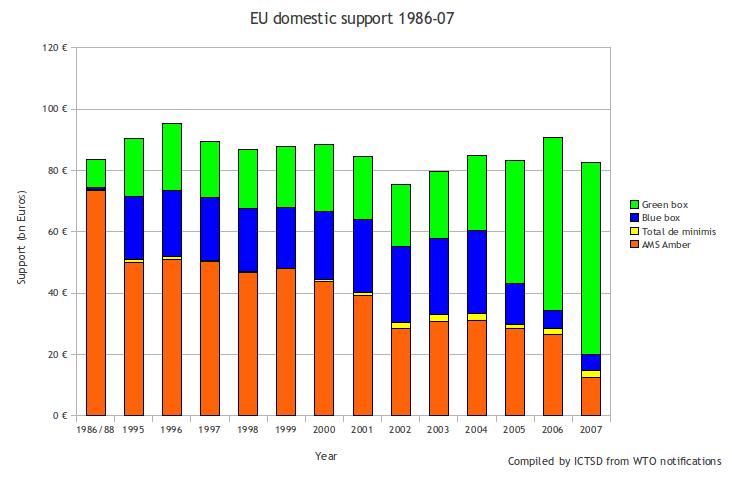 It turns out that the reason for the more than halving of the reported EU AMS in 2007/08 compared to 2006/07 is that the EU no longer calculates an ‘equivalent measure of support’ for fresh fruit and vegetables. Until 2007/08, it calculated an AMS for 16 fresh fruits and vegetables plus separate AMS’s for a number of processed fruit and vegetables (notably tomatoes and peaches) and bananas. This AMS was calculated as the support provided through the entry price system, which sets the minimum import price for imported fruits and vegetables.
But in 2007/08, without comment, the EU has dropped this calculation and now reports virtually zero trade-distorting support in the fruits and vegetables sector. While some non-exempt direct payments (e.g. production aids) are reported, these fall below the de minimis threshold and thus are not counted as part of current total AMS.
Alan Swinbank speculates on the reasons for this reporting change. He notes that, in 2007, the EU introduced a further reform of the market regime for fruits and vegetables. Among other changes, this permitted land on which fruits and vegetables were grown to be eligible for the Single Payment Scheme, and it integrated the previous coupled payments for processed fruit and vegetables into that Scheme. However, although it also abolished export subsidies, it did not alter the legal framework relating to external trade, including the entry price system.
Swinbank concludes:

The notification of European Union’s support to the fruit and vegetables sector in the 2007/08 marketing year reflects changes introduced in the 2007 reform, which warrants a move from a notification based on a price gap calculation to a notification of budgetary outlays, to the extent that no price support of any type exists any longer after the reform. The only such support still existing prior to the 2007 reform was a Community compensation for withdrawals that constituted, because of the way in which it was implemented, a survival of the previous public withdrawal system. This type of support has been abolished as a result of the reform.
Subsequently, to the extent that the domestic support measures in the fruit and vegetables sector after the 2007 reform do not meet Green Box criteria, they fall under the non-exempt direct payments and are therefore calculated using budgetary outlays. The budgetary outlays notified related to the value of production of products in the fruit and vegetables sector result in many cases in a de minimis level of support. [G/AG/W/83/Rev.1 18 July 2011].

I confess I don’t find it easy to decipher what exactly this response is trying to say. Despite having notified a price gap calculation since 1995 based on the entry-price system, it now seems that the EU argues, not only that no price support exists after the reform, but that the only price support before the 2007 reform was actually the scheme of Community compensation for withdrawals. However, even though it now seems to consider that the price gap (entry price) methodology was a mistake, it has not submitted revised domestic support estimates for earlier years.
It seems I am not the only person to have a comprehension difficulty. For the Agriculture Committee meeting on 23 June 2011, the United States posed the following supplementary question to the EU: [G/AG/W/84, 16 June 2011]

The EU’s response to this question posed at the 23 June 2011 meeting has not yet been posted on the WTO website, so to date its answer is unknown.
For Swinbank, the whole affair raises a number of interesting questions. What did the EU hope to gain from this change at this stage in the Doha Round negotiations? Why would the EU decide, in 2011, to report this significant reduction in its current total AMS which reveals to the entire WTO membership that the EU will have no difficulty in meeting the projected Doha Round AMS commitment of a 70% reduction even without further substantive policy change? Why did it not wait until a review of the entry price system had been concluded in the wake of a Doha agreement, given that entry prices for many products are probably not protective?
Why indeed?