The FAO Food Price Index averaged 156.3 points in September 2015 which is almost 20% less than a year ago. Last month’s 155.7 points were actually the lowest value of the index in the last seven years.
The FAO Food Prices index tracks international market prices for cereals, meat, dairy products, vegetable oils and sugar. As the following figure shows, prices of each of these are moving downwards in the short run, though they increased by 50-100% on a 2002-2004 basis.
FAO Food Price Index for 1990-2015 (2002-2004=100) 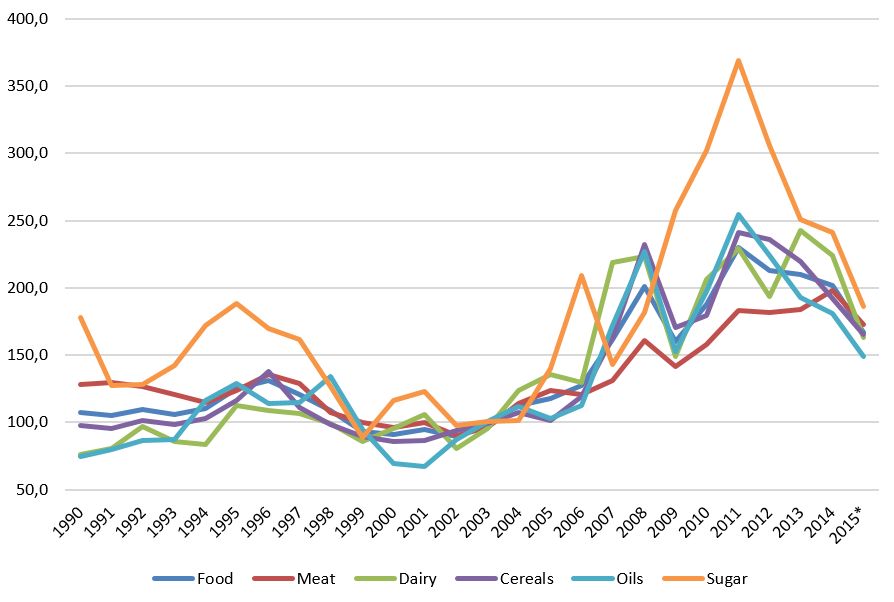 Values for 2015 are coming from January-September averages.
Source: Own composition based on FAO (2015) data
FAO suggests that reasons behind are ample supplies, a slump in energy prices and concerns over China’s economic slowdown. Another reason as some agricultural economists suggest is that food prices today are closer to reality than they were in 2006-2012 (some experts are referring to price bubbles that time).
However, it does not seem consumers can be happy with this situation in the long run. Agricultural and food prices are generally expected to increase because of, amongst other reasons, population growth, water scarcity, weather shocks, climate change and changing demand patterns.
Meanwhile, the CAP identifies food security as one of its biggest challenges in the long run. However, it appears that no adequate answers have been provided on how to meet this challenge with so unstable food prices. The milk protest a month ago well reflects this problem for a single market.
This post was written by Attila Jambor.
Photo: Telegraph.