To qualify for the 30 per cent of the direct payments budget that the Commission has earmarked for ‘greening’ the CAP, farmers with grazing livestock will be required to preserve permanent grasslands, arable farmers will be required to cultivate a diversity of (three) crops and practice basic crop rotation. In addition, all farms must designate 7 per cent of their farmland as ecological focus areas (EFAs).

EFAs draw on a Swiss policy in which farmers are paid a subsidy to dedicate a fixed percentage of the farm land to an environmental use rather than agricultural production. The aims include reversing the decline in farmland biodiversity, the loss of pollinating insects and farmland bird populations, reducing soil erosion and water pollution, all of which are known to be consequences of intensive agricultural production. There are aesthetic and quality of life benefits from the preservation of a ‘pastoral countryside’. Leisure and tourist enterprises that are an increasing source of economic activity in Europe’s rural areas may also benefit.

A buffer strip separating a cropped area from a hedgerow provides a habitat for wildlife: 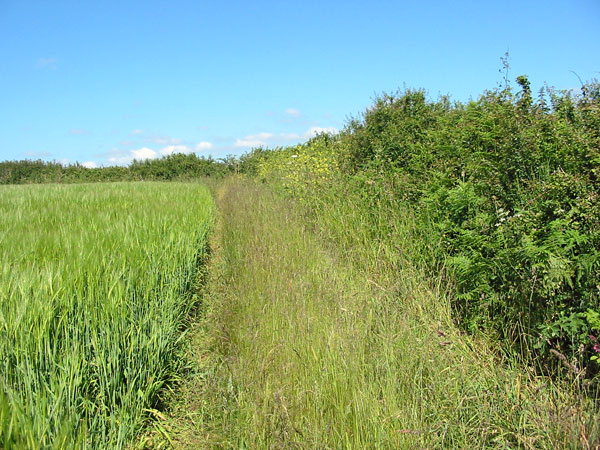 In a post on this blog, Ulrich Koestler makes a comparison between EFAs and compulsory arable set-aside. While both may reduce the production potential of European agriculture, there are very significant differences between Ecological Focus Areas and the policy of arable set-aside that was abolished in 2008.

Arable set-aside was a production control policy, not an environmental policy. In an era of low cereals prices and chronic over-production, the idea was that by removing land from of cultivation, cereals prices would rise to the benefit of farmers while unwanted surpluses, in the form of grain mountains, would be reduced.

In set-aside there was no intention that the land taken out of production should generate any positive environmental externalities. It turned out that there were environmental benefits from set-aside, but these were wholly incidental to the design of the policy. By contrast, ecological focus areas are wholly concerned with ensuring that every farm in Europe will do something to help conserve the environment and offset some of the negative effects of intensive agriculture. The compulsory element of ‘greening’ measures is the key distinction here with the voluntary approach of agri-environment measures in the CAP’s 2nd Pillar.

A report (PDF) by the Institute for European Environment Policy identifies the types of landscape features that might qualify as EFAs:

While set aside sought to reduce commodity production, EFAs aim to increase the production of ‘green infrastructure’, or ‘environmental goods’. The authors of the IEEP report argue that:

“If implemented with suitable conditions attached (such as minimum widths for buffer strips or grass margins; cutting or ploughing dates stipulated for fallow or grassland etc), and adequate enforcement then [ecological focus areas] could deliver significant benefits for biodiversity, particularly for arable farmland birds, but also for small mammals, insects, including pollinators, soil and water quality.”

They also suggest that EFAs would help with climate change mitigation and adaptation and argue that EFAs offer the biggest ecological return on investment of any of the proposed actions of the greening element of Pillar 1.

The reaction to the proposal for EFAs has been hostile, particularly from arable farmers. At this week’s seminar a representative of COPA-COGECA, himself an arable farmer, argued that ecological focus areas would prevent European farmers from meeting their moral duty to ‘feed the world’. They would rather leave the direct payments budget as it is, with few environmental strings attached.

For their part, many environmentalists are concerned that a the requirement for EFAs would not have a big effect as many farms already qualify for the ‘greening’ payment with their existing farming practices. Farms already have areas of land which are not cultivated for one reason or another: it’s difficult to get a tractor into that awkward corner of the field; that’s the land where the fox hunt passes through the farm. Many farmers, though not all, choose of their own accord to farm in an environmentally-friendly way. Indeed, it seems to have become something of a parlour game amongst British farmers to determine whether their farms already qualifies for the new EFAs! As it seems likely that some farms would qualify for the greening payment without doing anything they’re not already doing and therefore without any impact on output of commodities, and the costs of compliance may be overestimated by opponents of the plan. If this were so, the deadweight cost of the policy would be be large and might justifiably attract the criticism of analysts.

Much of the political argument seems to revolve around this issue. How much change in farm management will the proposed EFA requirement induce? On this point, the rhetoric of the Commission is that the changes will be slight, but the policy will avert the future loss of existing ‘green infrastructure’ through further intensification of farming. This brings up the familiar dilemma about whether paying farmers not to despoil the environment is consistent with the ‘polluter pays’ principle.

It is a vexed question that ultimately boils down to a the definition of the rights of landowners to do as they please with their land and whether we regard agriculture as the source of negative environmental externalities that need to be avoided (with regulation) or as the source of positive environmental externalities that ought to be encouraged (through incentive payments). Either way, it seems as though the greening requirement is, however limited, an improvement over the current ‘money for nothing’ approach of direct payments which would, it should be noted, continue to apply to the remaining 70% of direct payments that the Commission proposes to earmark as income support.

Ecological focus areas are an interesting, important and evidently contentious aspect of the Commission’s reform proposals and I will return to the subject in future blog posts.