The European Parliament’s agriculture committee published a working paper on the CAP health check at the end of last year. Tamsin Cooper and Martin Farmer at IEEP have already argued that from an environmental perspective it lacks ambition and is internally inconsistent. I have looked in detail at the working paper’s proposals for ‘progressive modulation’ which is put forward as an alternative to both the Commission’s proposals on payment limits and increased compulsory modulation.

Alan Matthews has astutely pointed out that in terms of curbing large payments to wealthy individuals and shifting money from Pillar 1 to Pillar 2, modulation is a far more potent instrument than payment ceilings:

Over 80% of EU farmers received less than €5,000 in direct payments in 2005, so would be unaffected by the increase in the modulation rate. Applying the additional compulsory rate of modulation of 8% to the remainder (on their payments above €5,000) would remove around €1.7 billion in Pillar 1 payments from the richest 20% of farmers. In contrast, the Commission’s tapering proposal would yield a more modest €0.5 billion.

Admittedly, the burden would shift from the really wealthy to the fairly wealthy, in that the Commission’s tapering proposal would target the top 0.4% of farm recipients while modulation will affect the top 20%. Nonetheless, it is important to keep the relative efficacy of the two instruments in engineering a shift from Pillar 1 to Pillar 2 in mind, and not to lose sight of the fact that an increase in compulsory modulation is the more important proposal of the two. 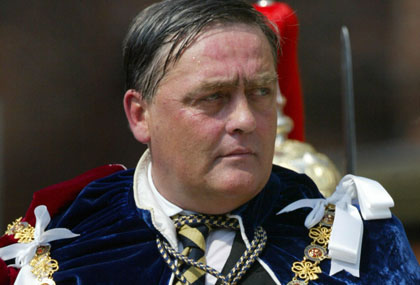 Here is a worked example. Imagine you are the Duke of Westminster (that’s him on the left). You have a net worth of around €5 billion. In 2004-05 you received €775,071 in farm subsidies for your Grosvenor Estate. Under the Goepel plan for progressive modulation, your subsidy would be reduced as follows:

Under the Commission’s proposals made on 20 November 2007, the Duke of Westminster’s payments would be cut by €243,782, or around 31 per cent, a reductionten times more than what is being proposed by the European Parliament’s agriculture committee.

Based on the latest figures on distribution of payments by size in the financial year 2004-05, the Goepel proposals would lead to an overall shift of just €250 million from the direct payments budget into rural development, or around 0.8 per cent. This is ten times less than the estimated combined effect of the Commission’s proposals for modulation (yielding €1.7 billion) and tapered payment limits (yielding €0.5 billion). As with most formulas to reduce larger farm subsidy payments, the member states most affected would be Germany, Czech Republic, the Netherlands and the UK.

The Goepel plan for ‘progressive modulation’ is a heavily watered down version of the already modest proposals for modulation and payment limits put forward by the Commission. This is no surprise. The European Parliament’s agriculture committee is stuffed with farmers and farm-sponsored MEPs and can always be counted upon to come up with highly reactionary proposals which are usually ignored (thankfully) because the European Parliament does not have co-decision powers when it comes to agriculture.

Most MEPs who do not sit on the agriculture committee would prefer to ignore the CAP because of its complexity and the fact that it embodies the bureaucracy and waste that over the years has come to give the wider European project a bad name. With the EU Reform Treaty extending the EP’s co-decision powers to farm policy, now is the time for MEPs to pull their heads out of the sand and get stuck in alongside those who are pushing for a more rational farming and food policies. After all, we are talking about fifty per cent of the EU’s budget.

Double click on interactive chart below to view estimated impacts of the Fischer Boel health check plan, the Goepel plan and the Fischler plan that was rejected in 2003. Calculations are based on 2005 data on payment distribution. Note that these calculations do not take into account the future increases new member states’ subsidy entitlements. I will focus on this subject in a future post.