Mairead McGuinness is an MEP from Ireland and a senior member of the Agriculture Committee. She’s also the new chair ofLUFPG, the informal ‘CAP Reform’ group of MEPs. It appears her website has been hacked by TeAm MoStA from Algeria. 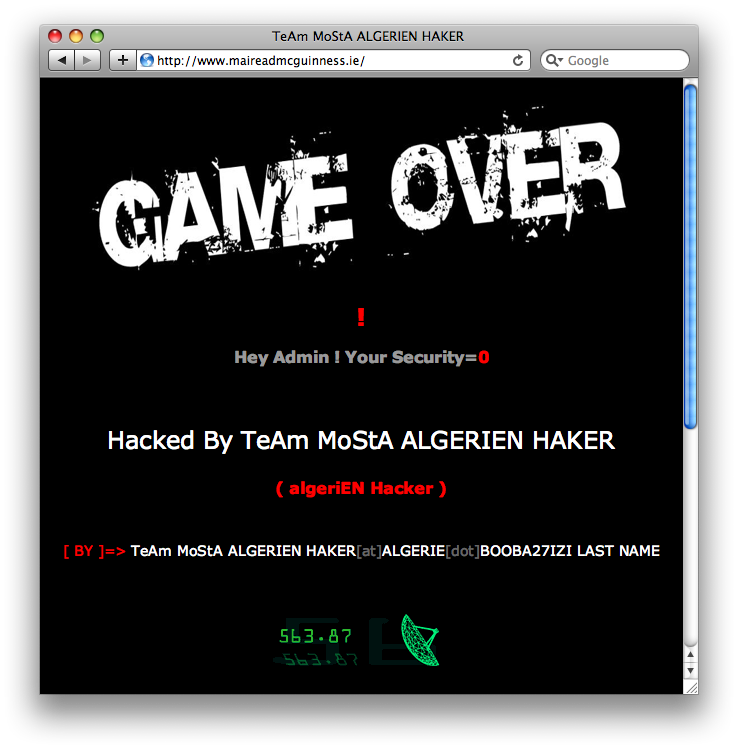 Mairead McGuinness is an MEP from Ireland and a senior member of the Agriculture Committee. She’s also the new chair ofLUFPG, the informal ‘CAP Reform’ group of MEPs. It appears her website has been hacked by TeAm MoStA from Algeria.

Anyone who has followed the CAP debate this past few years will have observed how the term ‘public good’ has been adopted by almost everyone seeking to advance their own vision of the CAP, from the dinosaurs of COPA-COGECA, to the more moderate National Farmers Union to the José Bové’s Via Campesina, organic farmers like the Soil Association, food policy wonks like Sustain and the Food Ethics Council, and of course the various environmental groups from where the public goods idea orignally hailed.… Read the rest

I don’t much agree with the Taxpayer Alliance, a right-wing campaign group based in London. The TA thinks taxes are theft and believes governments are rife with waste, fraud and abuse. I think paying taxes is patriotic and believe most public servants are well motivated and do a good job. The TA uses the CAP as a stick to beat the EU. I think the CAP gives the EU a bad name and want to see it reformed because I am a strong supporter of the EU.

Our differences aside, I’ll admit that TA has produced an amusing viral video to publicise its new report on the economics and the politics of the CAP, featuring a spoof of Jamie Oliver, the TV chef.… Read the rest

I have a lot of sympathy with tenant farmers. It is sometimes said that farmers are asset rich but income poor, by which it is meant that they own a lot of extremely valuable land but don’t make a whole lot of profit from working it. In the case of tenant farmers, who have to rent their land, they are too often asset poor and income poor.

The UK Tenant Farmers Association recently held its annual jamboree and, fresh back from his half term holiday in Egypt, National Chairman Greg Bliss gave a speech. He used the occasion to share some observations about agriculture policy that I thought might be of interest to readers of this blog.… Read the rest

It’s Friday afternoon and it’s been a long week. What better to calm the nerves after all the excitement of the health check than to take a break by spending a few minutes playing a new online video game from the European Commission? It’s called Farmland: The Game and in it you will have to learn how to feed calves, take care of pigs in a pigsty and visit the henhouse to collect eggs. On the game’s more advanced levels you may be required to stamp out an outbreak of foot and mouth disease, fill out an IACS form and organise a delegation of farmers from your region to lobby the European Parliament.… Read the rest

While many are disappointed by the lack of ambition in the Commission’s health check proposals, there’s no doubt that Commissioner Fischer Boel has been on form when it comes to the pithy soundbites.… Read the rest

We all know that the legislators who write US farm policy are not the brightest bulbs in the box. Even so, Senator Chuck Grassley treated us to an unusual insight into his own very special, mixed-up world during a telephone press briefing last week, reported in the Des Moines Register. Asked about the contribution of the US Government’s massive food-to-fuel subsidies to rising world food prices and the resulting hunger, poverty and social unrest, Grassley denied there was any connection and suggested the responsibility lay with people in China eating too much meat.… Read the rest

Agra-Facts is one of the best CAP news sources, although it does come with a fairly hefty price tag that probably puts it out of reach of anyone who is not professionally involved in European agriculture policy. Roger Waite, Agra Facts editor, tells me that he would like to open the Agra Facts competition to ‘rename the CAP’ to readers of this blog. Here are the details, and be sure to scroll down the page for our exclusive interactive name generator tool.… Read the rest