Although this is not the final agreement as the European Parliament still has to confirm the Council decision, it is highly unlikely that the EP risks the hard-fought agreement reached at the Council.  Therefore, the playing arena for agriculture in the next seven years is set in the final conclusions published by the Council.
In general, the deal reached limits the maximum possible expenditure for a European Union of 28 Member States (with Croatia’s accession this year) to €960 billion in commitments, corresponding to 1.0% of the EU’s GNI. This means that the overall expenditure ceiling has been reduced by 3.4% in real terms, compared to the current MFF – the first time in history when such a reduction is made. The ceiling for overall payments has been set at €908 billion, suggesting a continuous deficit of the EU budget – the fact which most MEPs in Brussels cannot accept.
Though expenditure ceilings for sub-headings of the MFF vary to a different extent, it is clear that the CAP budget is pushed down to €373 billion for 2014-2020, compared to the current €421 billion, indicating an 11% decrease (see Table below). Though this is not good news for agricultural stakeholders, the cut is still less here than in previous proposals (see Figure below). 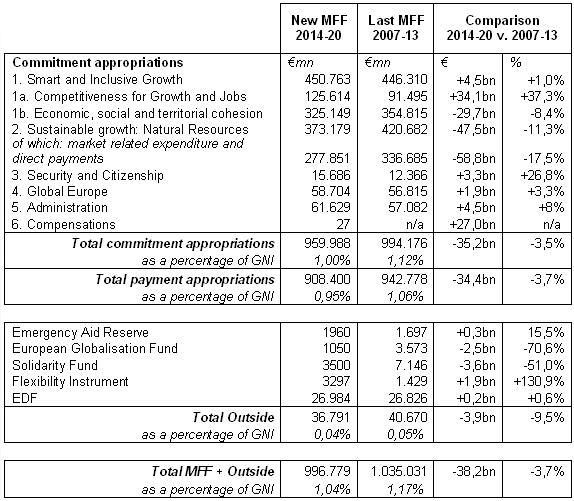 Source: Final conclusions of the Council 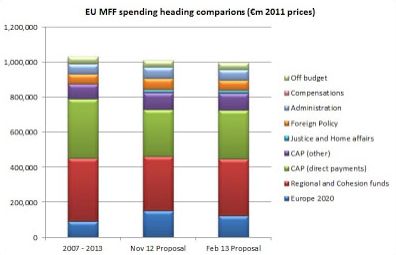 Going into detail, commitments in Heading 2, covering agriculture, rural development, fisheries and a financial instrument for the environment and climate action should not exceed €373 billion in 2014-2020, of which €278 billion (75%) will be dedicated to market related expenditure and direct payments. The two pillar structure will remain, though rural development budget was reduced even further in the final negotiations to €85 billion (14% decrease compared to the current situation). In addition, for the first time ever, Member States are allowed to transfer a part of their rural development budget to Pillar 1 (for most countries up to 15 per cent can be transferred, but some countries will be able to transfer an astonishing 25 per cent). The distribution of direct payments will be slightly more equitable than in the current system (the 90% approach with the idea of closing one third of the gap was accepted).
Moreover, it seems that the original proposals of the Commission on greening, generating a huge debate in various forums in the recent year, are totally watered down. According to the final conclusions of the Council,

The overall environmental performance of the CAP will be enhanced through the greening of direct payments by means of certain agricultural practices, to be defined in the Regulation of the European Parliament and of the Council establishing rules for direct payments to farmers under support schemes within the framework of the common agricultural policy.

Though this sounds nice, the essence here is that each and every Member State has the flexibility to create an own list of greening measures and what is even more, Ecological Focus Areas (ECA) cannot take land out of production, meaning that valuable management practices for protecting water quality, soils and biodiversity may be totally excluded. All this suggests a very light greening in the future.
The decisions described above suggest that Europe continues the outdated and potentially growth destroying spending on agriculture. Despite the continuous critiques, direct payments will still be in operation with an enormous part of the anyway decreasing budget. The original intention of the Commission was to ‘sell’ the CAP to European taxpayers as one delivering environmental public goods, requiring significant amount of money. Now it seems that this intention has been relinquished and European leaders do not want to explain us anymore why we need this ineffective policy instrument – they might have realised that no argument helps here. Moreover, capping will be voluntary and not a word is mentioned on the definition of an active farmer – issues that also generated serious debates at the European level.
On the whole, it appears that no real reforms will be made in the field of agriculture. One might think that top level decision makers believe hushing up problems and doing some cosmetics will solve our long-lasting dilemmas. Maintaining the status quo and delaying the necessary measures is always a convenient solution in the short run but what about, then, our future in the long run? Can we afford waiting for another seven years?