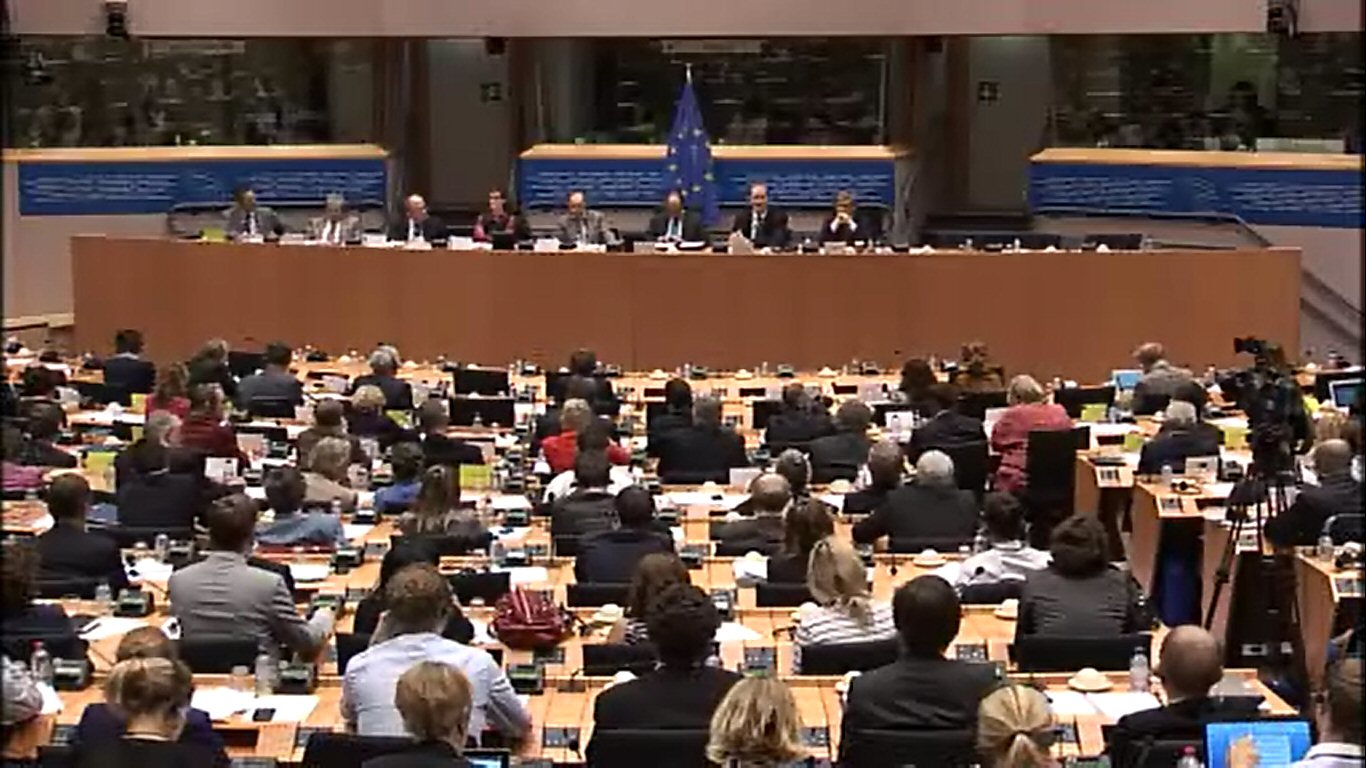 Yesterday morning (Wednesday 27 June), in a final trilogue, the Irish Presidency reached a political agreement with the European Parliament negotiating team on remaining outstanding issues on the CAP reform dossiers. In the afternoon the deal was discussed in a relaxed COMAGRI meeting.
Although no formal vote was taken, Paolo de Castro, the COMAGRI chair, concluded that there was broader support among the Parliament’s political groups for the final outcome than there was for the vote on the negotiating mandate in March. The Presidency had secured a more flexible negotiating mandate at the June Agricultural Council meeting earlier in the week, so although there is as yet no formal reaction from agricultural ministers it seems clear this agreement will also be supported by the Council. The main points of the deal are summarised in this Commission press release.
To cap this success for the Presidency, there was the further announcement this morning of a political agreement between the three Presidencies (Council, Commission and Parliament) on the MFF. Details of this agreement are here. It builds on the political agreement reached by the Council Presidency and Parliament negotiators in the MFF trilogue this week discussed in this previous post. The main changes compared to that text are as follows:

• Increases in the unused payment amounts that can be carried forward to increase the ceilings in later years (the flexibility clause). There are no limits on the carry forward in the first four years, and the ceiling on the maximum carry forward in the final three years is increased to €26 billion with annual limits.
• Increased flexibility for member states on a voluntary basis to increase their allocations for the aid for most deprived persons scheme.
• An addition to the Commission Declaration on the mid-term budget review that “The Commission will also examine aligning its proposals for the next MFF with the political cycles of the Institutions”.
• Some wording on addressing outstanding liabilities in the 2013 budget as follows: “In the context of this agreement the Council commits to take a formal decision on the first tranche of DAB 2 no later than ECOFIN Council on 9 July 2013. The Council commits to take all necessary additional steps to ensure that the Union’s obligations for 2013 are fully honoured. On the basis of a proposal to be made by the Commission in early autumn on the basis of the latest updated estimates regarding payment appropriations, the Council commits to decide, without delay, on a further draft amending budget to avoid any shortfall in justified payment appropriations.”

On this basis, EP President Martin Schultz has announced that he will propose that the Parliament vote on this MFF deal in plenary next week.
The CAP review agreement

At the start of the Irish Presidency at the beginning of January, in looking at the complicated process of co-decision and the linkages with the multi-annual financial framework MFF dossier I concluded that CAP reform would not be completed under the Irish Presidency. In a formal sense, this was a correct prediction. The first reading agreement between the Parliament and the Council will not be completed until the autumn.
However, six months ago it was not clear to me how the co-decision process would work. I underestimated the importance of the informal trilogue process which takes place when the two institutions decide they want to reach a first reading agreement. But also important has been the hugely skilful handling of the dossier by the Irish Presidency and Irish Minister for Agriculture Simon Coveney and his staff, first in brokering a general position in the Council and subsequently negotiating the political agreement with the Parliament.
Deal not yet complete
Nonetheless, there remain some outstanding issues which could not be addressed in the CAP dossier trilogue because they are covered in the parallel MFF negotiations. These issues include the flexibility to transfer funds between direct payments and rural development, the allocation of national envelopes for direct payments (external convergence) and rural development, rates of co-financing in Pillar 2 rural development schemes, the question of capping and degressivity and possibly the crisis reserve, though the latter is not specifically mentioned in the Commission press release on the political agreement.
The Parliament’s position is that these questions should be decided by co-decision and it is looking for flexibility from the Council on these issues. The Irish Presidency during the Council meeting earlier in the week had proposed a ‘landing zone’ where the Council would accept a mandatory degressivity on direct payment amounts over €150,000 at a rate of 5% but strictly on the condition that all other MFF issues would be taken off the table by the Parliament. In the event, the political agreement excluded these MFF issues entirely, so these negotiations now revert to the Council.
There was no indication in the provisional MFF agreement between the Presidencies this morning how these MFF reserved issues in the CAP reform negotiations will be addressed (formally, they are part of the CAP regulations and not the MFF regulation). One possibility is that the European Council meeting currently meeting will be asked to approve the proposed Presidency landing zone compromise although it is not clear if this would be an acceptable outcome to the Parliament. Chairman Paolo de Castro avoided giving a direct answer to this question at the press conference following the COMAGRI meeting yesterday.
A CAP reform?

In terms of the agreement itself and what it means for future EU agricultural policy, although there are some positive features, overall it represents no more than some minor fine-tuning of the status quo CAP regulations in return for greater flexibility of implementation by member states and a considerable increase in administrative complexity. The reform does not lead to a decisive paradigm shift in favour of a ‘public money for public goods’ philosophy. It does not even take further steps along the trajectory of rebalancing CAP spending between Pillar 1 and Pillar 2 set out in the two Fischler reforms and the Health Check.
The bulk of the CAP budget will continue to be spent on land-linked payments under Pillar 1 with no obvious rationale other than that to remove them is opposed by the current beneficiaries. On the other hand, despite a reversion to giving member states greater flexibility to use coupled payments, the market orientation of the CAP has been broadly maintained and pressure to reintroduce greater market regulation has been resisted.
The introduction of the greening payment is a recognition that agricultural policy should encourage more sustainable farming practices, even if the actual consequences in terms of environmental improvement from the elements agreed are likely to be minimal. The environmental NGOs have expressed their frustration with the outcome (see the reactions from World Wildlife Fund, Friends of the Earth, the European Environmental Bureau, the Institute for European Environmental Policy and Birdlife). No environmental interests were represented in the trilogue process, so it is not surprising that the level of environmental ambition in this reform was set so low.
At the same time, the environmental NGOs were forced to play according to the Commission’s rules of the game. They ended up defending the Commission’s proposals to green the CAP through Pillar 1 despite their evident defects. Nonetheless, securing the principles of ‘no double funding’ and a mandatory minimum spending on agri-environment-climate issues in Pillar 2 were important achievements even if, again, they simply maintain the status quo and do not represent new steps towards a more sustainable agriculture.
Fairness and flexibility
The motivation for this CAP review was not reform but to legitimise and defend the continued transfer of almost 40% of the EU budget to agriculture. In this it succeeded to an exceptional degree given the pressures on public budgets in Europe during this period of economic crisis and the relatively favourable market environment for agricultural products.
However, describing the deal as a victory for the status quo does not mean that it was not contentious. The key isssues revolved around how much more farmers would be asked to do to secure these payments (greening) and how to make the budget ‘fairer’.
As already noted, farmers in general will not find the conditions required to qualify for the greening payment particularly onerous. Maintaining permanent grassland for livestock farmers and implementing crop diversification and ecological focus areas of at least 5% of the arable area of the holding for larger arable farms will require minimal changes in current farming practice on most farms. There will be a ‘greening equivalency’ system whereby farmers already following beneficial environmental practices can automatically qualify for the green payment without necessarily complying with these practices. The Commission review of the EFA experience in 2017 which will accompany its legislative proposal to increase the percentage to 7% will provide better evidence on how land use will be affected in practice.
This CAP reform was the first in which the redistribution of payments, both across countries and within countries, was explicitly on the agenda. The difficulties in securing agreement on the reshuffling of (largely) a fixed pot of payments within countries underline the even greater political difficulties which face proposals for more far-reaching reform of agricultural policy.
The approach to resolving both of these issues has been to grant member states much greater flexibility in how they implement greening and in how they redistribute payments; indeed, this flexibility extends also to other ‘optional’ or ‘voluntary’ measures included in the new package, such as whether to recouple payments or not, whether to shift funds between the Pillars and whether to introduce a small farm scheme.
Some object to this ‘a la carte’ approach to the CAP and worry about the potential for distortions in the single market if farmers in one country receive more support, or a different form of support, than farmers in another. However, it is probably an inevitable consequence of trying to implement a common policy in an increasingly heterogeneous Union and, if properly monitored to avoid distortions, it can be a positive step towards greater subsidiarity in implementing agricultural policy.
Final ratification yet to come

For both the CAP reform and MFF dossiers, what has been achieved are political agreements between the Council Presidency and the Parliament’s negotiators for which formal ratification by both bodies must now take place. Initial reactions from the parliamentary groups suggest there will be sufficient support for ratification of this morning’s MFF agreement in the Parliament next week (see reactions from the S&D, EPP, ALDE and the Greens). That then leaves the MFF reserved issues for decision somehow, following which the way is clear for agreement on the CAP legislative texts in the Parliament plenary and the Council and the process of implementation can begin.