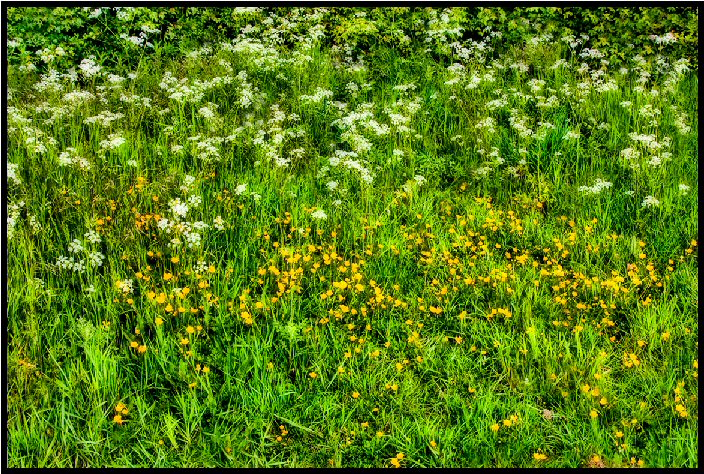 In one month’s time the Rio+20 international conference on sustainable development will take place with a focus on the ‘green economy’ and environmental governance. Green growth is the pursuit of economic growth and development, while preventing environmental degradation, biodiversity loss and unsustainable natural resource use.
The European Commission has launched several initiatives under the Europe 2020 strategy to boost the green economy. A key aspect of this strategy is the Roadmap for a resource-efficient Europe, which sets out a strategic framework for the efficient use of natural resources in Europe. Other initiatives include the OECD’s horizontal strategy for Green Growth, while the UNEP recently introduced its Green Economy Initiative.
What makes the green growth concept attractive to policy-makers and businesses is the idea that taking account of environmental concerns is not just a burden, a constraint on growth, but can be a source of growth and new jobs. A number of EU member states have made greening the economy and creating new opportunities for green business a growth priority with a strong emphasis on sustainable growth, eco-innovation and cleantech industries.
Green growth in the agriculture and food sectors
While much of the attention to date has been on the energy and transport sectors, agriculture has a central role to play in a green growth strategy. The challenges and opportunities for agriculture were outlined in an OECD report published last year. A major shift in farm policy and practice is needed if a growing world population is to be fed without over-exploiting scarce natural resources or further damaging the environment.
Embarking on a green growth strategy for food and agriculture requires action on a number of fronts:

Whether green growth involves an opportunity cost in terms of reduced economic growth is a contested issue. Some argue that the trade-off arises precisely because the cost of environmental protection is not accounted for under the ‘business as usual’ scenario, and therefore in the short run output would be higher than under a green growth trajectory. However, because production practices that deplete and/or degrade the natural resource base needed for future growth are unsustainable, in the long run the situation would be reversed. The stylized figure prepared by the OECD to illustrate possible future trajectories of growth in GDP over time captures this idea. 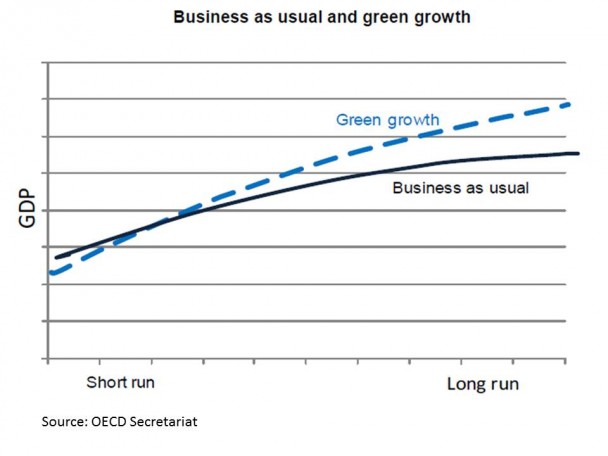 How do the Commission’s proposals measure up?
The Commission’s legislative proposals for the CAP post-2013 were conceived as a contribution to the Europe 2020 strategy, identifying green growth in the agricultural sector and the rural economy as a way to enhance well-being by pursuing economic growth while preventing environmental degradation.
Thus, one of the three objectives for the CAP set out in the Commission’s Nov 2010 Communication (sustainable management of natural resources and climate action) included the aim “to foster green growth through innovation which requires adopting new technologies, developing new products, changing production processes, and supporting new patterns of demand, notably in the context of the emerging bioeconomy.”
COPA-COGECA has embraced the concept of green growth provided that it integrates environmental protection and the production process in a way which maintains production capacity and contributes to efficiency, productivity and innovation. They criticise the Commission’s mandatory greening proposals as an inefficient way to obtain environmental benefits, as unworkable for smaller farms, as being overly rigid, for increasing farm costs, for restricting production and generally undermining the competitiveness of EU agriculture.
COPA-COGECA proposes to focus green growth measures on resource efficiency, particularly of nutrients and water, carbon sequestration in agricultural soil and biomass, and reduction in GHG emissions. Of course, it wants these measures to be voluntary, with payment financed by the EU budget, and applied uniformly across the EU.
It seems to me that the necessary focus on shifting EU agriculture on to a more sustainable growth trajectory has got lost in the negative reactions to the Commission’s proposals for mandatory greening. In the debates on the nitty-gritty of whether EFAs should be 7% of a farm’s arable area or less, or whether the threshold for exemption from the obligation to diversify crops should be 3 ha or 30 ha, the over-riding need for a step-change in EU systems of agricultural production is in danger of being forgotten.
The level of ambition does not yet seem commensurate with the magnitude of the task.
Picture credit Pat Dalton and used under a Creative Commons licence.