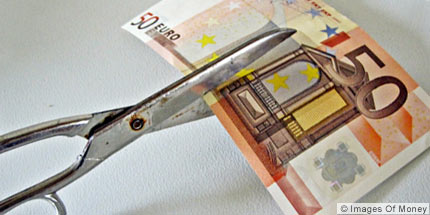 This post reviews the state of play regarding the MFF (multi-annual financial framework) negotiations in relation to the CAP budget and review of the CAP regulations post-2013.
The MFF negotiations take place in the General Affairs Council (GAC) attended by member states’ European Ministers or Secretaries of State on the basis of a ‘negotiating box’ paper drawn up by the Danish Presidency. This paper outlines the main elements and options for the MFF negotiations. It is updated as the negotiations move forward, and forms the basis for an agreement of the European Council. Once an agreement is reached, its content feeds into the legislative work on the different acts.
For those familiar with WTO agricultural negotiations, the negotiating box paper is similar to the draft modalities document presented by the Chair of those negotiations, filled with square brackets and alternative formulations for different paragraphs indicating areas of disagreement. The intention is to gradually remove the square brackets and reduce the number of alternative formulations over time as the negotiations proceed. The negotiations are guided by the principle that nothing is agreed until everything is agreed..
The CAP negotiating box

At the April GAC meeting, the Presidency presented the elements of the negotiating box for the CAP Heading 2 in the MFF for the first time. It is interesting to note those elements of the CAP review that the GAC ministers believe fall under their remit as part of the MFF negotiations. This is important because the decision-making process that applies to the MFF (as between the Council and the Parliament) is different to the ordinary legislative procedure that applies to the CAP Regulations.
Nine elements are specifically included. The specific language used in the negotiating box, including square brackets and alternative formulations, provides a good summary of the contentious points in relation to these issues as of April 2012.

Overall level of commitment appropriations for Heading 2, including specific ceilings for direct payments
Level and model for redistribution of direct support – details of convergence across Member States
Capping of support to large farms
Method for financial discipline
Other elements relating to Pillar I [an apparent reference to possible linear reductions in direct payments]
Greening [of direct payments]
Flexibility between pillars
Principles for distribution of rural development support
Co-financing rates for rural development support

In addition, the role to be played by macro-economic conditionality in deciding on the release of EAFRD rural development funds (as well as for the structural and cohesion funds) is included
Member state responses
The Council’s discussion on these elements of the negotiating box (which was held in public) is summarised in the minutes as follows:

Concerning the common agricultural policy, some delegations considered the proposed convergence of direct aids per hectare in terms of scope and timeframe as insufficiently ambitious. Others, however, found it too drastic.
Delegations welcomed the objective of improving the environmental performance of the common agricultural policy but questioned the “greening” proposed by the Commission. Member states considered the use of 30% of direct payments for this as too high and asked for more flexibility.
Opinions were divided on the proposed capping of support to large farms.
Many delegations insisted on the importance of rural development and the criteria for the allocation of support to this policy area.
Concerning the rules governing the five funds under the common strategic framework, some member states stressed the importance of macro-economic conditionality. Others were sceptical about it, unless it was extended to other types of expenditure.

Next steps in the MFF negotiations

At their meeting on March 20th with the Parliament’s Budget Committee rapporteurs on the MFF regulations, COMAGRI MEPs indicated that Parliament would only take its final position on reform of the EU’s Common Agricultural Policy (CAP) post-2013 once the budget has been decided. However, the COMAGRI rapporteurs will press ahead and prepare their draft opinions probably in June which will then be open for amendment over the summer.