For most of its life, DG Agriculture has been concerned with managing agricultural markets, increasing farm productivity and guaranteeing European farmers a good income. In the 1990s, under the leadership of Commissioner Franz Fischler, it began paying more attention to broader economic development and environmental concerns in rural areas. This new interest led to the establishment of the Rural Development Reguation, a suite of new policy instruments (a ‘second pillar’ of the CAP) that comprised a set of mostly farm-based subsidy schemes designed to run alongside the traditional farming policies of the EU’s common market organisations (the ‘first pillar’ of the CAP). The Commission recently held a big rural development conference in Cyprus and this was accompanied by the publication of a short paper looking at the role of agriculture in rural economies across the EU and a large dataset of rural development statistics and indicators.

“The importance and contribution of the agri-food sector to the sustainable development of rural areas” (PDF download) concerns itself with the role of agriculture as the primary sector in the broader economy of food production, distribution and retail. It shows that agriculture is most important in the new member states and the Iberian peninsular, southern Italy and Greece (see map below). In 2004, the agriculture sector accounted for 2.1% of GDP in EU-27 but for more than 10% in some Member States such as Romania and Bulgaria. It should be noted that these figures include the contribution of state subsidies, which are estimated in the region of 20-30% of net value added. So stripping out farm subsidies, agriculture contributes more like 1.5% of EU GDP. According to the report, around 6.6% of jobs in EU-27 were in the agriculture with significant higher levels in several Member States (more than 20% in Bulgaria and Romania). 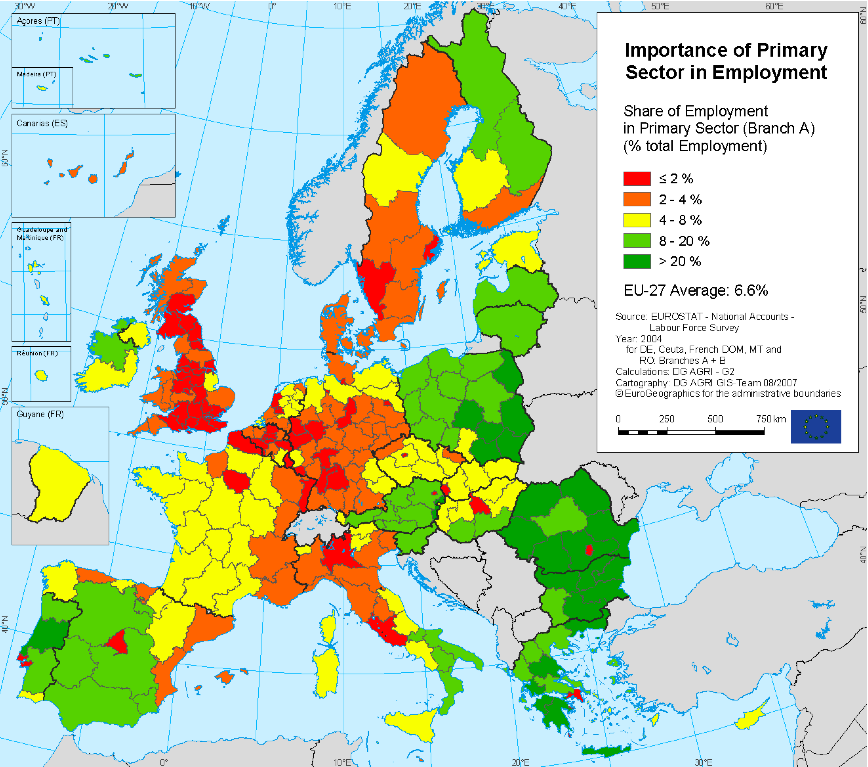 The report makes a few analytical observations, including:

– The EU has 14.5 million farms, most of which are very small farms located in member states that joined the EU in 2004 and 2007. The long term trend is towards fewer, larger farms.

– Rural economies will continue to evolve with an increasing importance of service sector. It will be driven by the urbanisation of rural areas around the metropolitan centres where in-migration is occurring, but also thanks to increasing connections with urban economies and the formation of ‘city regions’.

– Social demand that is also driven by environmental and health concerns will likely also define the natural and social constraints on EU land use and on agricultural practices.

– An increased segmentation of the EU market will take place because of the growing relative importance of transport costs in the agri-food sector.

– Liberalisation of international agri-food trade presents the greatest challenges for beef and poultry producers, especially grass-based systems, which are least competitive in pure cost terms. Areas that specialise in upland pasture-raised livestock may need targetted assistance to maintain jobs in farming and/or to diversify their economic base.