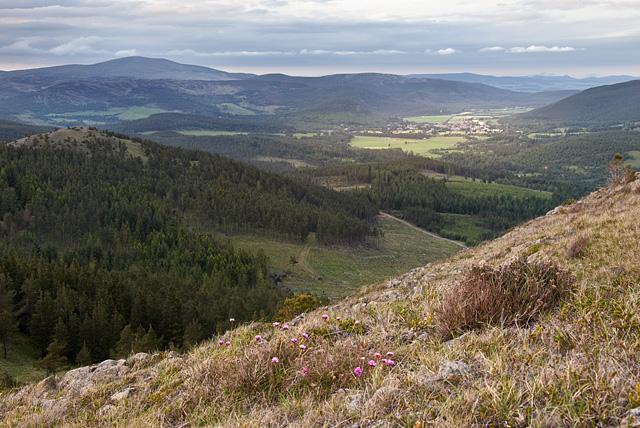 One of the longer-running sagas in EU agricultural policy-making is now entering the end game. I refer to the redesignation of certain less favoured areas (now called Areas with Natural Constraints) for the purpose of determining eligibility for ANC payments under the CAP. After much foot-dragging, it was agreed in the 2013 CAP reform that updated designation criteria would be used for ANC schemes in the 2014-2020 Rural Development Programmes, but Member States were given leeway to delay their introduction until 2018.

Presentations by DG AGRI officials at two recent workshops on the new ANC criteria, one organised by the European Network for Rural Development in October last year, and the other organised by COPA-COGECA in November last year, provide an overview of the state of play. While a number of Member States/regions have completed the redesignation, the great majority are still outstanding at this point in time.

Purpose of the ANC scheme

The purpose of ANC payments is to provide total or partial compensation to farmers for the natural or specific disadvantages of farming in areas with natural or specific handicaps to ensure that this land remains in agricultural production and to prevent land abandonment. Specifically, recital 25 of the Rural Development Regulation 1305/2013 reads:

Payments to farmers in mountain areas or in other areas facing natural or other specific constraints should, by encouraging continued use of agricultural land, contribute to maintaining the countryside as well as to maintaining and promoting sustainable farming systems. In order to ensure the efficiency of such support, payments should compensate farmers for income foregone and additional costs linked to the disadvantage of the area concerned.

Payments should be granted annually per hectare of of agricultural area. The additional costs and income foregone should be calculated in comparison to areas which are not affected by natural or other specific constraints. Member States are allowed to differentiate the payments taking into account the severity of the identified constraints affecting farming activity but also by farming system (intensive, extensive, crop or livestock).

Minimum and maximum payments per hectare are set out in the Regulation. The maximum amounts were substantially increased in the 2013 CAP reform to €250/ha per year (or €450/ha per year in mountain areas, with the possibility of higher payments where a case can be made) following amendments submitted by the European Parliament. Member States are also required to provide for the degressivity of payments above a certain threshold level (unless the payment per hectare is made only at the minimum level).

(a) mountain areas, designated according to the criteria of altitude or slopes;
(b) areas, other than mountain areas, facing significant natural constraints (previously, these were described as “LFA intermediate areas”);
(c) other areas affected by specific constraints. Member states may designate 10% of their territory under this category in order to preserve environment, landscapes, coastal areas or tourism potential.

Recital 26 of the same Regulation notes that:

Background to the ANC area redesignation

As far back as 1990, the Court of Auditors drew attention to the continuous growth in the coverage of less favoured areas and highlighted the lack of documentary evidence to the Commission in support of classification decisions. It noted with classic understatement that “… the possibility cannot be ruled out that a regular assessment of the actual level of handicap in all the less-favoured areas of the Community will lead to the discovery that, in certain parts of these areas, there are no longer any handicaps left”.

In 1993 the Commission began a review of LFA classifications following the Court’s criticisms by requesting the relevant justifications from the Member States. However, there was little cooperation forthcoming. The Court of Auditors in its 2003 review of LFAs noted that “the Commission was faced with serious opposition from Member States to examine properly the continued validity of underlying data for classification”. LFA payments were so popular that there was permanent pressure on Member States to extend the LFA areas.

The Court of Auditors 2003 LFA review again highlighted the lack of consistency in the way LFA intermediate areas (category (b) above) were defined in Member States. These so-called ‘other less favoured areas’ were defined as areas in danger of abandonment of land-use and where the conservation of the countryside is necessary, as shown by the following indicators: land of poor productivity, lower economic performance of farms than the average, and a low or dwindling population dependent on agriculture.

The Court pointed out that these socio-economic criteria were interpreted liberally and very differently by Member States. It recommended that the Commission “develop …. a more appropriate set of indicators for identifying LFAs that would be consistent and guarantee an equitable treatment of beneficiaries.” However, it is taking almost 15 years before payments are made to farmers based on an updated set of criteria, as shown in the timeline below. 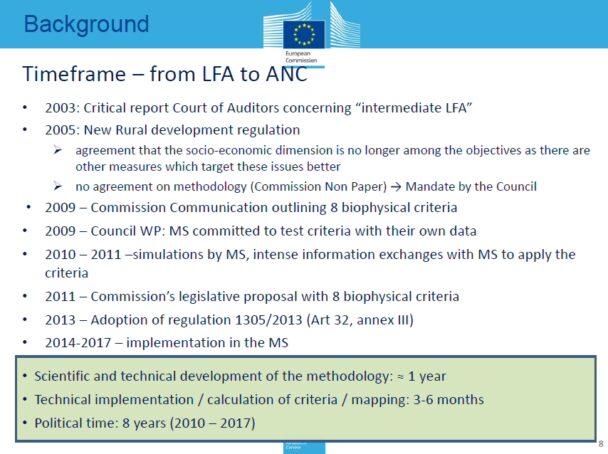 Already in 2005 in the new Rural Development Regulation (EC) No 1698/2005 it was agreed in principle that socio-economic criteria would no longer be used to designate intermediate LFA areas and a new definition of these areas was agreed. However, the Council could not agree on a possible Community-wide system for classifying these areas in line with the new definition and the policy objectives. It was therefore decided to maintain the previous system in force for a limited (sic!) period of time. The Commission was asked to undertake a review of the LFA scheme with a view to presenting a proposal for a future payment and designation system applying from 2010.

In its 2009 Communication on better targeting aid to farmers in areas with natural handicaps, the Commission admitted it could not present a legislative proposal together with an impact assessment because the necessary data did not exist at the European but only at the national level. A group of experts coordinated by the Joint Research Council (JRC) had proposed a set of eight soil and climate criteria indicating, at a certain threshold value, severe limitations for European agriculture. However, the active involvement of Member State authorities would be required to simulate the application of these criteria on the basis of sufficiently detailed soil and climate data.

Another reason for Member State involvement was that the 2009 Communication had introduced the concept of “fine-tuning”. This refers to the need to take account of the impact of technical progress and human intervention which has allowed natural handicaps to be overcome.

In other words, areas which might be deemed handicapped on the basis of one of the eight biophysical criteria might no longer suffer from low productivity if farmers have successfully managed to overcome these handicaps. The example was given of wet areas that are artificially drained and are now highly fertile, even though the artificial drainage has not changed the intrinsic character of the soil type, which will still classify as poorly drained. Ensuring that areas where the natural handicaps have been overcome were not given ANC status also required detailed data that was only available at the national level.

Following extensive testing with Member States on the feasibility of using these biophysical indicators to delineate areas facing natural handicaps, the Commission included these criteria as part of the legal text of the proposed Rural Development Regulation in its 2011 legislative package of proposals for the 2013 CAP reform.

There were some grumblings from Member States (see conclusions of the AGRIFISH Council where this issue was discussed) around both the use of biophysical criteria and the process of fine-tuning. Also, the European Parliament, while accepting the principle of designation based on bio-physical criteria, wanted to refer back the precise criteria and threshold values to a separate Commission legislative proposal.

In the end, however, the Commission’s proposals were eventually adopted with some small amendments. Given the sensitivity of this issue and the long history of opposition to change from Member States, this was a significant achievement of the Ciolos Commissionership.

State of play of ANC redesignation

Although in principle the newly-delineated ANC areas should have been attached to the Rural Development Programmes submitted for the period 2014-2020, it was recognised that it would take time for Member States to undertake this work and a derogation up to 2018 was allowed.

The latest state of play (as of November 2016) is shown in the figure below. Only a handful (11 out of 98 RDPs with ANC payments) managed to include their new designations when submitting their RDPs and another 4 are in the process of finalising theirs. This means that the great majority of Member States are still working on the designation and fine-tuning. 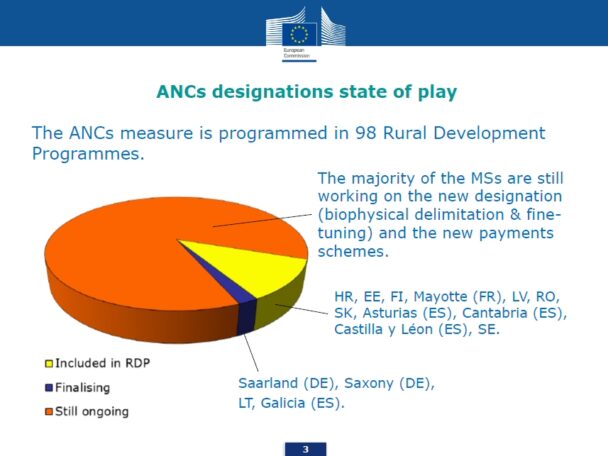 A more detailed assessment of progress based on information available to the JRC in October 2016 suggests that there are a number of Member State/regional RDPs where the ANC delineation has been technically agreed, but a worrying number where the status is reported as “early technical discussions”. 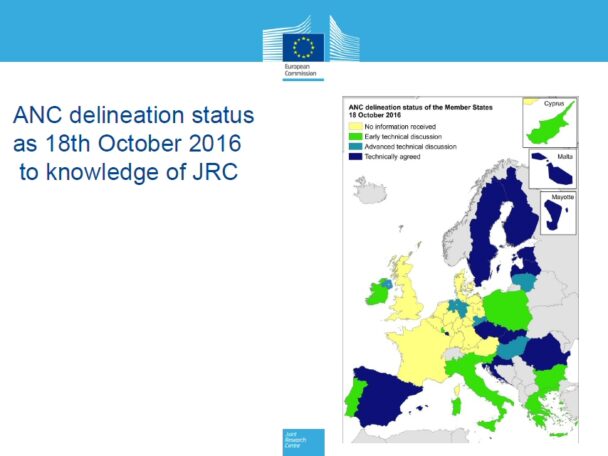 The adoption of the new designation should take place sufficiently in advance before the deadline for submission of payment applications in 2018 (usually mid-May). A number of procedures are required to be fulfilled. Member States are required to send their proposed designation to DG AGRI which is then assessed by DG AGRI and the JRC (for the biophysical delimitation) and by DG AGRI for the fine-tuning.

Once the designation is approved, a modification to the country/regional RDP is required. This modification should be submitted before the Member States make expenditures, in order for this expenditure to be eligible for reimbursement.
The Commission’s fear is that, if Member States further delay the submission of their biophysical delimitations and/or fine-tuning exercises, this will lead to last minute bottlenecks and delays if there are a large number of late submissions. If the new areas are not agreed in time, there will be an automatic reduction in the ANC payments that farmers in these regions currently receive.

Photo credit: The Coyles of Muick, Aberdeenshire, Scotland, © Copyright Nigel Corby and licensed for reuse under this Creative Commons Licence.