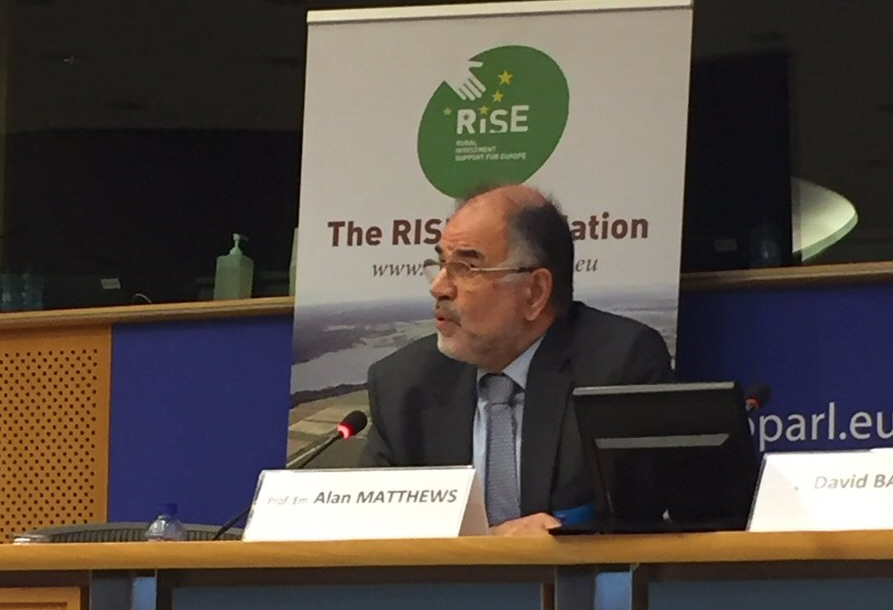 Yesterday I took part in a meeting at the European Parliament under the heading “CAP – Out of the box thinking‘ jointly organised by the RISE Foundation and the European Landowners’ Association. The event was part of the preparation for a report by the RISE Foundation under the leadership of Professor Allan Buckwell aiming to provide ideas for the CAP post 2020. My contribution was to argue that further reform of the CAP is needed now. Below is a slightly edited transcript of my remarks.

Reform of the Common Agricultural Policy has been ongoing since the seminal McSharry reforms in 1992. They have covered both the common market organisations, which have become more market-oriented, as well as rural development programming.
Direct payments were originally introduced to compensate for the reduction in market intervention prices in the MacSharry and later reforms, but were subsequently extended to farmers in new Member States where this rationale did not apply.
Since then, various justifications for direct payments have been put forward.
They address the problem of low incomes among farmers.
They ensure food security for EU citizens.
They contribute to resilience and provide a safety net for farmers faced with market price and income variability.
And they support sustainable land management.
These are all important objectives. In my contribution, I want to ask whether decoupled area-based payments are a good instrument to achieve these objectives. I will argue this is not the case.
This is not a trivial issue. In recent years, direct payments have accounted for over 70% of the entire CAP budget and almost 30% of the entire EU budget. Ensuring that this money is well-spent and helps to achieve important EU objectives is crucial at a time when budgets are under pressure and the value of the EU itself is under question.
When we examine the contribution of direct payments to farm incomes, it is important to remember that not all of the money made available by taxpayers benefits farmers. At least some of it is capitalised into land values and higher input prices, and thus benefits actors outside of farming itself.
However, the more important point is that, given the very heterogeneous structure of EU agriculture, a flat-rate payment paid per hectare is inevitably going to benefit larger farms. Eurostat figures show just 337,000 farms manage just over half of all EU farmland in 2013.
It is thus not surprising that Commission figures show that the 450,000 farm holdings that received more than €20,000 per farm in decoupled payments in 2014 took more than 50% – actually 56.3% – of the entire €39 billion paid out in decoupled payments in that year. These are not farms with low incomes from farming.
Nor is the solution simply to lower the cap on direct payments. Many small farms have income from off-farm employment or pension or social welfare payments.
Food insecurity in the EU has been increasing, as evidenced by the greater use of food aid schemes and food banks since the financial crisis in 2008, but this is entirely an issue of lack of income among food insecure households which will not be addressed by producing more food in Europe.
If we look at sporadic threats to national food supplies, these will most likely to come from weather-related extreme events or the introduction of exotic pests or diseases where access to trade and imports is the best defence. Domestic food prices can also be influenced by price volatility on world markets, but exposure to this hazard is not reduced by increasing domestic food self-sufficiency.
A longer-term worry is whether unsustainable production practices are undermining Europe’s ability to feed itself. If so, decoupled direct payments are an ineffective way to address this threat.
The case that direct payments contribute to resilience and risk management in the face of unstable market returns is based on the observation that direct payments provide a more stable income stream to farmers than do returns from market activities.
But this is true of all public payments to farmers so it is not something unique to Pillar 1 decoupled payments.
And Pillar 1 decoupled payments are not particularly well targeted to address income instability. They are often smaller on those farms that face the greatest income variability. Nor do they vary between years of high and low farm incomes. The Agricultural Markets Task Force noted that, in periods of low prices, farmers look for exceptional crisis measures and do not consider direct payments a crisis response.
Over the years, a higher share of CAP spending has targeted sustainable land management. Around €6 billion per annum is foreseen for this purpose in Member States’ Rural Development Programmes.
The big innovation in the 2013 reform was to introduce a greening payment accounting for 30% of direct payment envelopes, thus notionally allocating €12 billion per annum for practices beneficial to the climate and the environment.
However, early evaluations suggest there has been very limited environmental improvement as a result of this trebling of EU expenditure on agri-environmental measures. This should not come as a surprise. Greening payments in Pillar 1 are constrained to be simple, generalizable and annual, whereas effective agri-environmental interventions need to be place-based, targeted, multi-annual and developed in collaboration with farmers and land managers. There is no link between the amount of the greening payment and the cost of compliance.
There is thus huge scope for more effective environmental interventions if the direct payments system were redesigned.
I conclude that uniform area-based decoupled payments paid on every hectare of agricultural land are an ineffective policy instrument, they are not an efficient use of taxpayers’ money and they are inequitable to boot.
For farmers, they increase competition for land, push up land rents and prices, slow down structural change, make entry for young farmers more difficult and put downward pressure on product prices.
The constraints on the farm budget are likely to be tighter going into the post 2020 period than in the 2013 CAP reform. Hence the urgency of this discussion on how to get the best value for money for both taxpayers and farmers from the CAP budget.
Given that many farm holdings have an unhealthy dependence on decoupled payments, no one is suggesting that these payments should be eliminated overnight. There will be a need to protect the incomes of smaller and more vulnerable farms during the transition. But the next CAP reform provides an opportunity to signal that the days of uniform, area-based payments paid to all farmers have no place in a modern agricultural policy. Instead, policy should aim to assist farmers face specific challenges or to provide specific public goods.