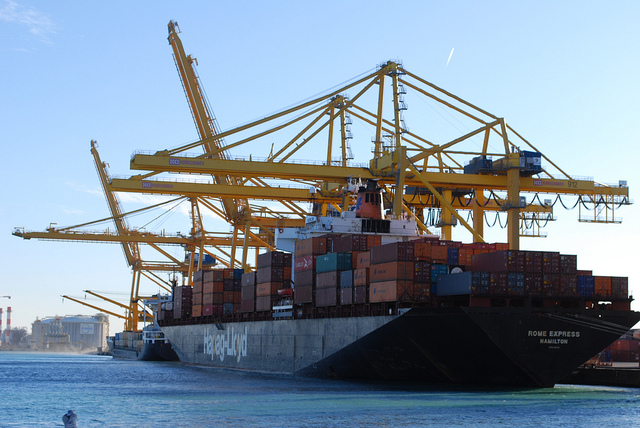 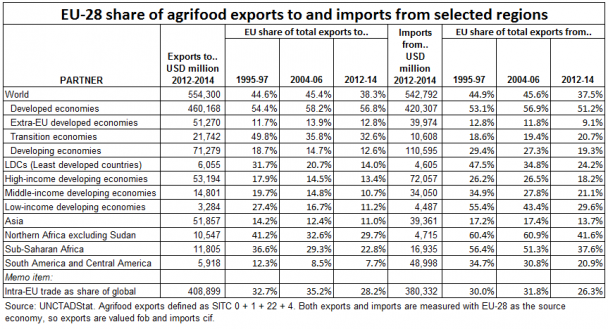 The table shows the EU’s share of global exports and imports of agrifood products, but excluding fish (SITC 03). When trade within the EU itself (intra-EU trade) is included, then the EU accounts for 38% of world agrifood exports and imports. This represents a fall from a share of 45% of global exports and imports in the mid-1990s. On the surface, this is a relatively gentle fall over a period of nearly two decades.
However, the disaggregated picture tells a more interesting story. Because of the single market, food products are intensively traded within the EU itself. Intra-EU trade alone accounted for 30-33% of global trade in the mid-1990s, and still represented 26-28% of global food trade in the most recent period. The data cover internal trade between the 28 existing member states, regardless whether they were or not EU members during the period. Successive EU enlargements and the resulting elimination of trade barriers has helped to maintain the intensity of food trade flows among this group of countries over this period.
The EU maintained its market share in exporting to all developed countries (including intra-EU trade) and also in exporting to extra-EU developed countries (indeed, its market share of all exports to the latter increased marginally from 12% to 13% over the period shown). In terms of imports, the EU-28 continues to account for over half of all imports into developed countries (including intra-EU trade) although its importance as a market for extra-EU developed countries fell from 13% to 9% over the period.
In the mid-1990s, the EU was the single most important supplier to the transition economies (50%), North Africa (41%) and Sub-Saharan Africa (37%). In the most recent period 2012-2014, these shares have fallen to 33% (transition economies), 30% (North Africa) and 23% (SSA), respectively.
The changes on the import side are more striking. In 1995-97, the EU accounted for 60% of the agrifood exports of North Africa, 56% of Sub-Saharan Africa and 48% of the least developed countries. By 2012-2014, these shares had fallen to 42% (North Africa), 38% (SSA) and 24% (LDCs), respectively.
On the rapidly-growing Asian market, the EU’s share of exports to these countries has fallen slightly from 14% to 11% over the past two decades, while these countries now send 14% of their total agrifood exports to the EU compared to 17% two decades ago.
The sharp fall in the importance of the EU market for African countries and LDCs is in sharp contrast to the changes in EU trade policy towards these countries. Since 2001 when the EU introduced its Everything but Arms scheme of duty-free and quota-free access for LDCs, and then extended this to most African agricultural exporters in 2008 as part of the system of Economic Partnership Agreements, African countries and LDCs have had the most preferred access to the EU market of all exporters. Despite this, more rapidly-growing import demand in neighbouring and other markets (notably China) has helped them to diversify their export markets extraordinarily rapidly.
Implications
The story from these figures is that the EU plays a more modest role in international agrifood trade than it did before. One consequence of this is that any remaining trade distortions due to its Common Agricultural Policy now have a smaller impact on world markets than they would have done before. A corollary is that the agricultural policies of other countries, and particularly the developing countries which now play a larger role in both exports and imports, now have a greater impact on the level and stability of world market prices than was the case previously.
Another consequence is that the EU’s ability to use the size of its import market to set standards for international agricultural trade, for example, with respect to genetically-modified crops or environmental sustainability, is diminished, as exporters become less and less reliant on the EU market. The EU also becomes less interesting over time as a partner in mega-regional trade agreements, a factor which the US ‘pivot to Asia’ and the priority it has given to finalising the TPP over the TTIP negotiations has underlined.
This post was written by Alan Matthews.
Photo credit: Ivan Mllnaric via Flickr under Creative Commons licence