The Fabian Society in the UK has established a Commission on Food and Poverty to examine how poverty relates to the food system. The Commission published an interim report in March based on the initial evidence it has gathered. The Commission’s approach is to look at access to food, health outcomes and what the consequences of the ways the food system operates are for low-income households in the UK and consequently elsewhere.
I recently made a submission to the Commission on the way in which agricultural policy affects food prices and the implications this might have for consumption, nutrition and health. Because of the recent and ongoing reforms of the CAP, I argue that the impact of agricultural policy on food prices is now much more limited than in the past. However, high tariff protection for some products means that food prices within the EU for a handful of commodities (beef, poultrymeat, potatoes, tomatoes and possibly fruit) are higher than they otherwise need to be. But further, I argue that agricultural policy is a poor instrument to address the important questions of access and poor nutrition being investigated by the Commission.
The Fabian Commission’s interim report

The Commission’s basic finding can be summed up as follows: “While most people in the UK can access a wider range of food than ever before, many people on low incomes are unable to access affordable, nutritious food…. The affordability of food ultimately comes down to levels of income and the price of food and other household goods. Changes to household incomes, food prices and the price of other essential living costs in recent years have made food less affordable for those on low incomes.”
The Commission notes that the proportion of the average household budget spent on food has fallen from 33 per cent in 1953 down to 12 per cent in 2012 in the UK. However, the price of food began to rise from 2006.
This has affected those on the lowest incomes disproportionately because food makes up a greater proportion of their budget – between 16 per cent and 35 per cent. “Combined with increases in other basic costs, such as housing and energy, those on the lowest incomes are running out of budget elasticity and are finding themselves closer to crisis…. This proximity to crisis of those on low incomes is manifesting itself in the growth in the use of food banks.”
The Commission quotes studies which compare the average prices of ‘healthy’ food items and ‘unhealthy foods’, which suggest that healthy diets are becoming more expensive. Households have responded by trading down on the food they buy, increasingly buying cheaper, less nutritious food.
While at the average level, the UK has been making progress in diet and health outcomes, those on lowest incomes are eating less fruit and vegetables, more salt, more sugar, more saturated fat and more processed foods. The poor are one and a half times more likely to suffer from diabetes, and while child obesity is falling dramatically in high-income households, it is still unrelenting in low-income households.
How agricultural policy affects food consumption

These trends demand a policy response. In my submission I explore the possible role of agricultural policy. I first suggest a conceptual framework to think about the links between agricultural policy and food consumption which I reproduce below. There are many links in the chain of cause and effect. 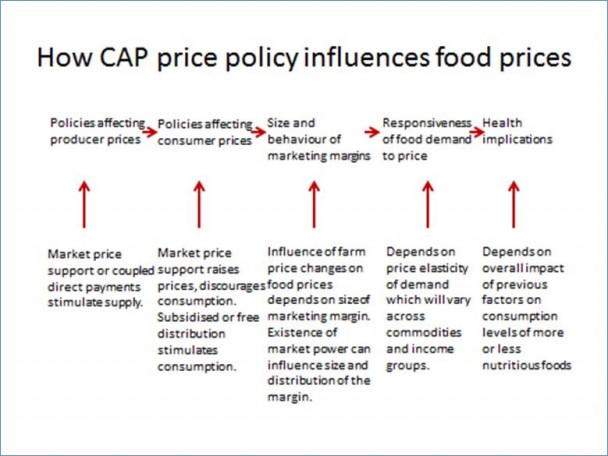 Under the ‘old’ CAP, support to farm incomes was provided through high product prices. Farmgate prices within the EU were up to twice world market levels, and in some cases (e.g. sugar) even higher. Market price support raises prices for both producers and consumers. A paradoxical result was that these high prices, although they stimulated EU production, had the effect of restraining consumption. This was demonstrated clearly in a paper written by Josef Schmidhuber, then at the FAO, on the impact of the CAP on the EU diet in 2007 which is still worth reading today.
However, the CAP today is a very different animal. In my submission to the Fabian Commission I go to some length to describe the changes which have occurred, all of which will be very familiar to readers of this blog. The replacement of market price support by direct payment support under successive CAP reforms, first as coupled payments and later decoupled payments, means that the stimulus to farm production has been greatly reduced. However, some direct payments remain coupled, and there is controversy over whether and to what extent even decoupled payments may encourage farmers to increase production.
However, whatever the impact on production, the important point is that domestic support is now paid for by taxpayers rather than consumers. This means that food prices (and consumers) are no longer directly affected by EU domestic support policies. Of course, tariff protection remains high for some commodities but, for many commodities where the EU is a net exporter (e.g. dairy products, wheat), this tariff protection is redundant as EU producer prices are set by the marginal price which is the world market export price.
The upshot is that, whereas the CAP kept market prices (and, thus, consumer prices) high in the past, this is now the case only for a handful of commodities (beef, poultrymeat, potatoes and tomatoes, as shown in the table below; these are the commodities in the OECD database, fruits would probably be added to this list if the information were available). The table reports the values for the Consumer Nominal Protection Coefficient (consumer NPC) which is defined as the ratio between the average price paid by consumers (at farm gate) and the border price (measured at farm gate). The consumer is defined as the first-stage buyer of the agricultural commodity. Values greater than 1 indicate how much more first purchasers of farm produce are paying because of the CAP compared with what they would pay in the absence of policy intervention. 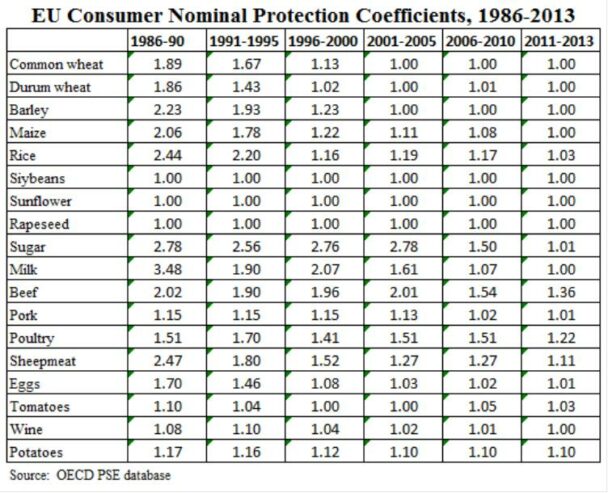 Two specific examples of food commodities where the CAP kept consumer prices high are dairy and sugar. For both milk and sugar, the stimulus to production due to high producer prices was controlled by quota limitations. Dairy quotas were removed on 1 April 2015 and sugar quotas will be removed on 1 October 2017. For both commodities, other things being equal (and in the case of both dairy product and sugar markets, there is very high price volatility), the removal of quotas will lead to a fall in prices relative to what they otherwise might have been. In the case of dairy production, academic studies have pointed to a possible fall of up to 10% in raw milk producer prices and of up to 22-23% in the case of sugar beet. The fall in milk prices is mainly due to the impact of increased EU production and exports on world market prices, as EU dairy product prices are now aligned to world market levels.
Relationship between food prices and diet composition

Returning again to the schematic diagram setting out the channels whereby the CAP impacts on consumer food prices and food consumption, the impact of farmgate price changes on food consumption depends on the degree of added value along the processing and marketing chain. The higher the share of marketing services in the final consumer price, the lower the share of the farm raw material and the lower the influence of changes in farmgate prices on final consumer prices.
For dairy and sugar prices which are likely to be most affected by the recent CAP reform, even in the case of liquid milk and granulated sugar pack sales with the lowest degree of processing, the farmers’ share is a relatively small share of the total retail price, and the impact of changes in farmgate prices is correspondingly diminished.
The problem in using agricultural policy to try to influence food consumption is not just the long chain of cause-and-effect, It is also because high consumer prices discourage consumption of both healthy and unhealthy options (compare the protection for beef, poultrymeat and tomatoes in the table above), while low consumer prices stimulate consumption of both healthy and unhealthy options. Agricultural price policy is much too broad and undifferentiated an instrument to use to try to steer nutritional outcomes.
Assume, for example, that on nutritional grounds it was desired to lower butter consumption. Arguing to maintain dairy quotas because this would help to keep the price of butter higher than it would be in the absence of farm policy would be a highly expensive and inefficient way of trying to achieve this nutritional goal.
It would be much more effective to use policy instruments more tightly targeted to the objective the policy-maker is trying to achieve. In this case, for example, a fiscal tax on fat consumption would be a more appropriate policy to improve nutrition outcomes than raising the producer price of milk because it would avoid all the consequential distortions and unintended consequences on the producer side of the market.
In the medium-term, whether food prices remain high or even increase will depend, crucially, on the contribution of agricultural research to raising productivity further in a sustainable way. There are, indeed, some exciting technologies emerging which can transform the food outlook in the medium-term.
It is important to ensure that the appropriate resources are devoted to realising the potential of these technologies in both the private and public sectors and that regulatory oversight of these new technologies is consistent, predictable and transparent while taking full account of relevant science and appropriate risk assessment.
The bottom line

Agricultural price policy can have an impact on the level and composition of food consumption. With industrialised food systems these impacts will be rather small because the farm share of retail spending on food is now quite low.
In any case, successive reforms of the CAP which have transferred the burden of providing support to farmers from consumers to taxpayers also mean that the empirical size of the CAP’s impact on food consumption is now very small. Tariff protection means that prices for a handful of farm products are maintained above the market equilibrium price.
In the medium term, keeping food prices low in a constrained world requires significant investment and an enabling business environment to bring some of the promising technical advances becoming available to fruition and working in farmers’ fields.
Agricultural price policy is a very poor instrument to use to steer consumers’ food consumption and diet choices. Far better to make use of more targeted policies implemented much closer to the problem they are trying to address.
My full submission to the Fabian Commission on Food and Poverty can be found here. The Commission has published a list of key questions for stakeholders and is inviting further submissions before its final report appears later this summer.

Photo credit: Picture of a US food kitchen via Wikipedia

4 Replies to “Food prices, poverty and the CAP”