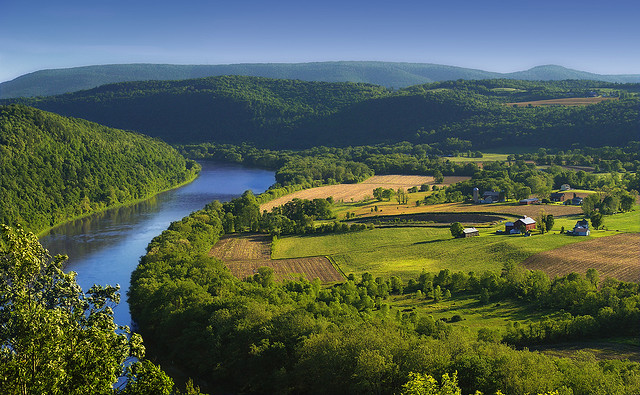 DG AGRI was able to announce in this past week that it had approved a further 5 Rural Development Programmes (RDPs) for the period 2014-2020. This means that 78 of the 118 RDPs have now been adopted covering 76.6% of the envisaged funding. The state of play (as of the end of August) is shown in the graphic below. Note that one-third of RDPs still remain to be adopted at this point, even if they account for less than 25% of the envisaged expenditure. 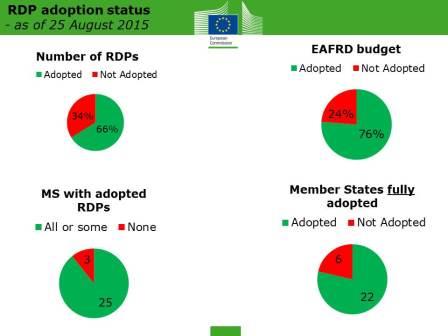 Source: DG AGRI
Reasons for delays need to be examined

When the approval exercise is completed, we will need an investigation into the reasons for these unacceptable delays and some allocation of responsibility between possible contributing factors. Lessons need to be learned for the next programming period. The factors which might have contributed to the delays in approval fall under four headings:
• The delayed approval by the Council and Parliament of the basic legislation which in turn delayed the adoption by the Commission of the relevant delegated and implementing acts interpreting how the legislation should be implemented. For example, the delegated act supplementing the Rural Development Regulation was not adopted until March 2014 and the implementing act not until July 2014 according to the RD legislation web page. In the coming programming period, the Commission is asked to make its proposal for the next Multi-annual Financial Framework (MFF) six months earlier in the timetable than occurred this time. If member states and the European Parliament can hold to this timetable, it could facilitate the earlier adoption of the necessary legislation next time out.
• The programming process itself put emphasis on greater integration of rural development programming with the other structural and investment funds. While greater integration is desirable, the process (as I described in this previous post) is very complex and arguably top-heavy, requiring initial adoption of the Community Strategic Framework, then preparation by each member state of Partnership Agreements and finally the development of the operational and rural development programmes. At each stage of the process there is a requirement for partnership and extensive consultation with local partners, including as part of the ex-ante evaluation.
• When the draft rural development programmes are sent to Brussels, they undergo detailed and rigorous scrutiny by the Commission. Poor preparation by member states and regions of their draft programmes mean that they are subject to extensive criticism and requests for additional clarification and revision. The Irish draft rural development programme, for example, received 266 observations from the Commission, which apparently was relatively low compared to other member states. Responding adequately to these observations adds significantly to the time required for approval. Although an important effort is made by the European Network for Rural Development (ENRD) to help member state officials to understand the programming requirements, the fact that the goalposts change with the adoption of a new Regulation also implies there is a lot of uncertainty about what is required, necessitating a process of trial and error as the draft programme goes through successive versions. As taxpayers’ money is involved, it is of course a good thing that member states and regional RDPs are subject to a proper scrutiny. Whether better preparatory work would result in fewer ‘errors’ at this stage is something which should be investigated in a future review.
• Finally, there is the possibility that the Commission services are simply unable to cope with the extraordinary peak in the work required at the beginning of a programming period with the submission of 118 RDPs at roughly the same time for approval. Commission staffing has been reduced in recent years, but even with adequate staffing it would be difficult for any team to handle this temporary increase in workload. A review would help to identify if bottlenecks arose at this stage, for example, if member states had to wait for unduly long periods of time for a Commission response either to their initial or revised submissions.
Rural development budget now fixed

The overall EU RD budget for the 2014-2020 period and its phasing has now been fixed and amounts to just under €100 billion (€99.4 billion) for the seven years which will be divided among the 118 RDPs plus an amount for technical assistance. In addition to the amounts set out in the Multi-annual Financial Framework, the RD budget has gained from the transfer of funds from Pillar 1 in the years 2015-2019 due to capping of direct payments as well as a net transfer of €3 billion from Pillar 1 to Pillar 2 as a result of member state decisions under the flexibility provision in the legislation (see graphic below). 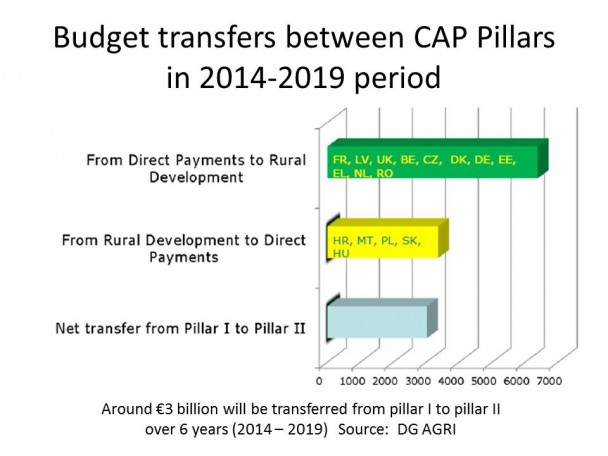 In addition, because of the significant delays in RDP approval, around €9.5 billion of RD and Fisheries funds (as well as funds for other structural and cohesion programmes) which under the 2014-2020 MFF should have been committed in various member states in 2014 were uncommitted. The Council approved a revision of the MFF in April which allowed the transfer of unused RD funds from 2014 to 2015 and 2016. This change did not affect the overall allocation of funds to each member state, but altered the annual profile of commitments. The details of expenditure by member state and the finally agreed profile are set out in this Commission Delegated Regulation.
The relative importance of RD spending from the EU budget in the different member states in the period 2014-2020 is shown in the following graphic, which also shows those member states where RDPs are a regional rather than a national responsibility.

The Commission also adopted a Delegated Regulation at the beginning of August which gives member states more flexibility to utilise outstanding EU Rural Development (RD) funds in the 2007-2013 programming period. Member states will be allowed to transfer up to 5% of RD funds to a different “Axis” of the foreseen Rural Development Programme, rather than the current 3% limit.
This is a response to requests from member states which are concerned that funds previously committed under the 2007-2013 Rural Development, but not yet taken up, will be de-committed at the end of this year. Under this additional flexibility, member states have the chance to transfer funding from under-performing measures, where funds are not fully utilised, to the priorities where additional funds are needed.
One indicator of the extent of undercommitment is given in the graph below, which shows the share of programmed total public expenditure on RD programmes by member state in the period 2007-2013 which had actually been realised by the end of 2014. That it is possible under multi-annual programming to achieve nearly 100% realisation one year after the end of the programming period is shown by the experiences of Ireland and Finland. However, the very disappointing progress in drawing down funds in Romania, Bulgaria and Greece is noteworthy. Yet despite this poor performance, both Greece and Romania elected to transfer funds from Pillar 1 to Pillar 2 in the coming programming period (see graphic above) !!

This post was written by Alan Matthews
Photo credit: Nicholas_T via photopin cc