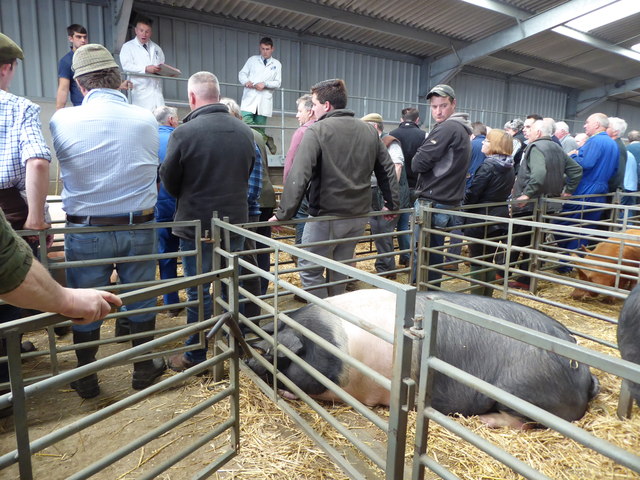 Phil Hogan, the EU Commissioner for Agriculture and Rural Development, has promised a Communication on modernising and simplifying the CAP before the end of 2017. One of the six broad objectives for the CAP set out in the Commission’s inception impact assessment is to “encourage a vibrant rural economy by fostering growth and jobs in rural areas and encouraging generational renewal”.
This builds on one of the three objectives for Pillar 2 rural development spending in the 2014-2020 period which is “achieving a balanced territorial development of rural economies and communities including the creation and maintenance of employment” (Art. 4, Regulation (EU) No 1305/2013).
It also follows on Commission President Juncker’s mission letter to the incoming Commissioner in October 2014 which highlighted the importance of the Commission’s jobs, growth and investment agenda. Hogan was asked to ensure “that rural development spending is well integrated into jobs- and growth-generating investment strategies at national and regional level”, to implement the recently agreed CAP reform “so as to maximise its contribution to our jobs and growth agenda”, and to contribute to the 2016 review of the Multiannual Financial Framework “by identifying ways of further increasing the focus of the CAP on jobs, growth, investment and competitiveness”.
This emphasis on jobs in the Commission’s programme reflects the calamitous impact of the 2008 economic crisis. In the five years after 2008, the EU28 lost almost 8 million jobs, according to OECD employment statistics. Unemployment, especially youth unemployment, remains unacceptably high in many EU Member States. The Commission’s programme calls for additional public and private investment in the real economy, particularly to improve infrastructure; to support education, research and innovation; and to promote renewable energy. The programme also calls for a better regulatory environment and for the removal of unnecessary ‘red tape’ which stifles innovation and competitiveness.
Policy-makers are thus asking whether EU agricultural policy could do more, or be more effective, in contributing to job creation. Last year the European Parliament passed a resolution on how the CAP could improve job creation in rural areas. The issue will also be raised in the Commission’s Communication on modernising and simplifying the CAP which is expected towards the end of this year.
In this post I review trends in agricultural employment, focusing on primary agriculture rather than overall employment in rural areas, and I discuss the impact of the CAP on these trends.
Agricultural employment

First, some background statistics. The first table below shows total employment in agriculture in the EU-28, distinguishing between the total number of persons engaged and their equivalent in Annual Work Units (AWUs), where an AWU corresponds to the work performed by one person who is occupied on an agricultural holding on a full-time basis.

In 2013, over 22 million people were involved in agricultural production in the EU-28. These are people who are recorded as regularly working in agriculture, but this does not necessarily imply that they are employed on a full-time basis. The large number of those regularly employed in farming is related to the fact that farming family members are the main source of agricultural employment in the EU-28. On average, each agricultural holding employed 2.1 persons. However, these people are not working full-time in agriculture. Many of them are either underemployed in agriculture and/or divide their time between agriculture and other economic sectors. By converting the persons engaged in agriculture to full-time AWUs, the number employed in agriculture is reduced to around 9.5 million, which means that 0.9 AWU is required on average per agricultural holding.
There are significant differences in this relationship between older and newer Member States. There are many more persons engaged in agriculture in the newer Member States, although on a full-time equivalent basis the difference is not nearly so great. Many of those engaged in agriculture in the EU-13 are working on semi-subsistence holdings (defined as holdings from which less than half of their agricultural output is sold, with the remainder being consumed within the farm household). A much higher proportion of those working in agriculture in the EU-15 are salaried employees. Finally, it is also possible to assess the contribution of non-regular non-family labour in terms of AWUs. Much of this labour contribution is seasonal work, often undertaken by migrant workers, and is probably significantly underestimated due to its irregular nature.
Much of CAP spending is designed to maintain resources, including labour, in agricultural production in the EU. However, agricultural employment (including forestry and fishing) in the EU-27 (excluding Croatia for which data for the earliest years are not available) has steadily fallen from 16.0 million in 2000 to 9.8 million in 2015, using Labour Force Survey estimates rather than the Farm Structure Survey data on which the table above is based. In the ten years to 2013 one-quarter of EU farms disappeared, despite the fact that the overall utilised agricultural area remained stable during that time.
The figure below shows that labour shedding in primary agriculture was more rapid in the newer Member States than in the older ones, and more rapid prior to 2008 than in the subsequent years. Agricultural employment fell by 5.4% per annum in the newer Member States 2000-2008 and by 2.4% per annum in the period 2008-2015. The corresponding figures for the older Member States are 2.9% in 2000-2008 and 1.6% in the period 2008-2015. These trends raise the question whether CAP expenditure has been effective or not in stemming the outflow of labour from the sector.

It might seem self-evident that support for agriculture through the CAP should promote agricultural employment and stimulate rural jobs. In practice, however, it has proven surprisingly difficult to document a positive relationship, and indeed many studies find the opposite (see the survey of the recent literature in this European Parliament report).
If OECD countries are ranked according to the level of agricultural support that farmers receive, it turns out agricultural employment has fallen fastest in those countries which have provided the highest support, at least over the period 1987–2007 (for the graph showing this correlation, see paper here).
A number of explanations have been given for this counter-intuitive finding. One is that CAP subsidies facilitate a process of investment and mechanisation which has substituted capital for labour and thus reduced the demand for labour on farms. The assumption is that this process of labour-saving technological progress has occurred at a more rapid rate because of the CAP, although this assumption is rarely rigorously tested.
Another explanation is that most CAP supports go to larger farms enabling them to grow more rapidly at the expense of smaller farms. Because larger farms are less labour-intensive than smaller farms, this could be another reason why agricultural support is negatively associated with employment. As the table below shows, there is strong evidence that smaller holdings are more labour-intensive than larger ones, even if these aggregate figures do not take account of differences in land quality and cropping patterns between farms of different sizes. However, the belief that the CAP has accelerated structural consolidation among farm holdings is directly contradicted by those who argue that the removal of CAP support would particularly disadvantage smaller farms and accelerate the process of structural consolidation (see, for example, the final report of the CAP-IRE project, 2011). 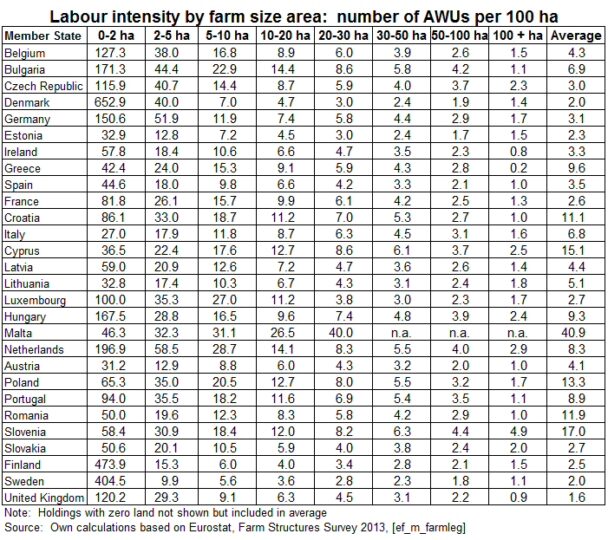 Given the family farm structure of much EU agriculture, the evolution of agricultural employment largely depends on the willingness of farmers’ children to take over the family farm. One intriguing explanation hypothesises that the higher income farmers enjoy as a result of policy support allows them to invest more in the education of their children, but higher educational qualifications increase the probability that the children are no longer interested in taking over the family farm. The argument relies on the existence of a credit constraint which limits the ability of farm families to provide education to their children in the absence of support, as well as assuming that the family farm structure limits access by potential entrants to farming, so that employment levels are not only determined by the demand for labour in agriculture.
Another argument is that it is wrong to focus just on employment in primary agriculture. Agricultural employment might also be defined more broadly to include the indirect jobs supported in the upstream and downstream industries as well as through the spending of agricultural incomes. Taking the off-farm jobs supported by agriculture into account might suggest a different conclusion when evaluating the impact of CAP expenditure on rural jobs. This is one way of reconciling measures which increase agricultural labour productivity and thus reduce the demand for agricultural labour, but by increasing agricultural competitiveness and agricultural output increase the demand for off-farm labour.
The impact of agricultural policy on the demand for labour in agriculture clearly operates through several channels and opposite effects come into play. It would therefore not be surprising to observe that the net effect might vary among regions and time periods, which would also account for different results in different studies. Also, there is some evidence to suggest that different CAP policy instruments (Pillar 1 vs Pillar 2 payments, investment subsidies vs agri-environment payments) may have different consequences for agricultural employment, which could also account for some of the differences between the different studies. Finally, not all studies use appropriate methodologies so that results cannot always be taken at their face value.
Concluding thoughts

Despite the conflicting evidence, my intuition is that the dominant impact of the CAP has been to slow down the process of structural adjustment in EU agriculture. It keeps more farm holdings in business, particularly smaller farms, than would otherwise be the case. Other things equal, this should lead to higher employment in agriculture. It may be that the CAP has accelerated the process of substituting capital for labour on individual holdings, a process which would have occurred in any case. However, given the family farm structure of EU agriculture and the limited use of paid agricultural workers, it does not seem plausible that this effect was strong enough to overcome the limits on further structural consolidation introduced by CAP payments.
Whether this is a sensible objective for CAP spending, and whether this spending could be more effective at promoting jobs both in agriculture and in rural areas more generally, is a question I leave to another post.
This post was written by Alan Matthews.