Today, farmsubsidy.org revealed the results of an intensive two-day harvest of new farm subsidy data published by the European Union’s member states in accordance with the new laws on disclosure of beneficiaries of EU funds.

The data, relating to payments made in 2009, has been harvested from twenty seven government websites, in some cases using advanced computer programming techniques. So far, data on 38.3 billion euros of payments have been harvested (from a total CAP budget of 55 billion euros). In some cases member states have made the data easy to access, in other cases they appear to take deliberate steps to block access. As at 11am on Tuesday 4 May, 99% complete data has been obtained from 21 member states. Only partial data from France, Greece, Cyprus, Italy and Portugal. The United Kingdom has withheld all its data for political reasons until after this week’s general election (though the Scottish Government has published its data). 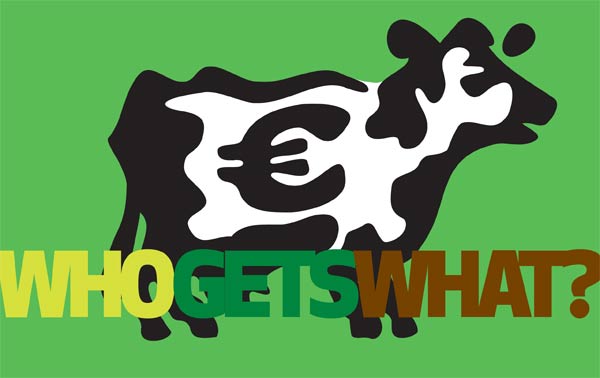 Farmsubsidy.org’s 2009 millionaires list (beneficiaries that received more than a million euros) shows a significant increase over last year. In 2008 we identified 1,040 farm subsidy millionaires. In 2009 already some 1,212 have been identified, receiving a combined total of 4.9 billion euros. This number is likely to rise as it does not include all data from Portugal and the UK. We expect that ultimately there will be a third more farm subsidy millionaires in 2009 than in 2008.

As was the case in 2008, the list of top recipients is dominated by sugar processing companies.

While the data does not indicate why these payments to sugar companies were made, it may be assumed they are part of the EU’s programme for ‘restructuring’ the sugar sector. This involves processing companies that wish to stay in business paying a levy into an EU fund to ‘buy out’ those companies giving up their processing quotas. Processing quotas are valuable because the EU price for sugar is fixed well above world market prices, representing a hidden subsidy from European consumers to sugar producers.

Other top recipients include dairy processing and trading companies that have benefitted from the reintroduction of the EU’s export subsidies for milk powder and butter, which enable them to dump excess European milk production on world markets. Export subsidies were reintroduced as part of the EU’s bail out of the dairy sector after milk prices fell from record highs in 2007/08 to record lows in 2009.

At the other end of the scale the data harvest has revealed some very small payments, some less than a euro. It is assumed that the costs of administering such modest aid payments vastly exceeds the face value of the payments.

According to the data from Sweden, which includes personal identification numbers, the youngest recipient of CAP funds is just 14 years old, while two Swedish recipients are 100 years old, though both are dead. The oldest living Swedish CAP recipient is a 98-year-old woman living in Dalsland.

A number of curious recipients of CAP funds was also revealed, illustrating the diversity of beneficiaries: an accordion club (Sweden – €59,585.10), a billiard club (Denmark – €31,515, a payment for beer and soft drinks), a Juri High School alumni society (Estonia – €44,884), Ons Genoegen ice skating club (Netherlands – €162,444), the Sint Maarten amateur football club (Netherlands – €354,566.62) and Schipol Airport in the Netherlands (€98,864.33). As in previous years, a number of banks and horse riding clubs were among the beneficiaries.
In Bulgaria, the national CAP paying agency appears to have paid itself a sum in excess of a million euros as well as payments to the 26-year-old daughter of the former Bulgarian deputy agriculture minister (who had responsibility for EU funds) in excess of €700,000 euros.

Farmsubsidy.org has also published an evaluation of which member states are meeting high standards of budget transparency, and which are failing.

The decision of UK civil servants to withhold the data during the general election campaign is without precedent and has provoked the disapproval of the Commission. According to the UK’s Department of Environment, Food and Rural Affairs, which has previously backed transparency in farm subsidies, the decision was made in the interests of political candidates who are beneficiaries of CAP funds.

The transparency ranking is topped by Hungary. Hungary also deserves special mention as the ‘most improved’ member state. Last year, the Hungarian government published data in an exceptionally unhelpful way: a series of PDF files that ran to thousands of pages. This year, the Hungarian government has provided comprehensive information on both EU-funded farm subsides and nationally-funded farm subsidies, in a user-friendly bulk-downloadable, electronic format. Other countries that have followed the best practice of providing the ‘raw data’ are Belgium, Denmark, Estonia, Czech Republic, Lithuania, Poland, Romania, Slovenia and Sweden.

This year’s transparency villains are Austria, Cyprus, Greece, Ireland, Italy, Luxembourg, Malta, Netherlands, Portugal, Portugal and Slovakia. These countries have all refused to provide the data for bulk download and their websites require ‘web-scraping’ robots to be programmed to harvest the data.

Greece is a particular problem case, suggesting that the Greek government’s difficulties with basic numeracy are not confined to its budget deficit. The Greek government’s farm subsidy website very inaccessible and the data presented on it contain arithmetical errors. For example, the published figure for total payments to certain beneficiaries was found to be less than the sum of the payments listed for those beneficiaries. A case of two plus two equalling one.

This is only the first cut of the 2009 data. More analysis is to come…