Earlier this week, BBC Radio 4 broadcast Churchill Confidential, a dramatisation of British cabinet meetings chaired by Prime Minister Winston Churchill, records of which have only recently been released into the public domain. In this week’s episode, looking at Churchill’s second term of office (1951-55), we get an overview of the pressing issues of state at that time: the impending conflict with Egypt over the Suez Canal, the development of the British atom bomb, balancing Britain’s relationships with its European neighbours and the United States of America, immigration and race relations, the coronation of Queen Elizabeth II, the devaluation of the pound and, somewhat incongruously… a decision on whether to reduce the meat ration. Why is this relevant to the CAP? Find out after the jump…

You can listen to a short extract here:

Food shortages right across Europe persisted long after the end of the second world war, and their memory is often seen as a key driver for the foundation of a Common Agricultural Policy whose aim was to boost farm production by all means necessary. Nevertheless, it is difficult to imagine a discussion of stocks of corned beef taking place around the cabinet tables of European countries nowadays, so profound have been the increases in food production, international trade in food and the affordability of food (both within Europe and globally). Yet in the past few months, the issue of food scarcity does appear to be creeping back onto the political agenda.

As an aside, the suggestion by one of Churchill’s cabinet colleagues that Britain should seek more imports from Latin America is fascinating considering that the EU has only recently bowed to the pressure of Irish beef farmers, who mounted a successful campaign to ban Brazilian beef from the EU, on legally debatable grounds of food safety and animal health.

Lester Brown, guru of the American deep green movement, has been warning of a Malthusian catastrophe since as long ago as 1963 when his first book Man, Land and Food was published. Each time Brown has come up with a slightly different rationale (the rise of India, the rise of China, the oil crisis, drought, climate change, agricultural intensification and environmental degradation and so on). And each time he has been proved wrong. But with rapidly changing diets in the rapidly growing Chinese middle class, the worldwide rush to biofuels and a series of bad harvests driving up commodity prices, could Brown’s dire predictions finally come true? You can read his latest assessment of the situation here, or listen to Brown set out his thinking in a teleconference last month: 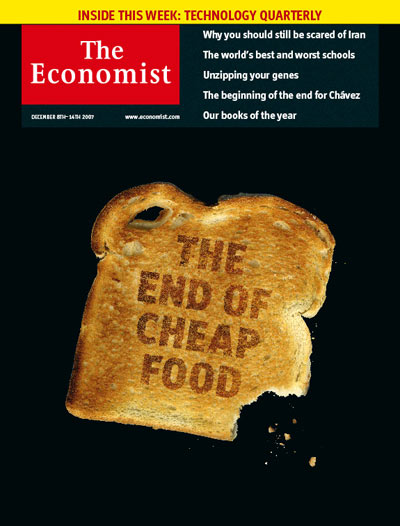 In December last year, The Economist ran a cover story (right) proclaiming ‘the end of cheap food’. Michel Barnier, the French agriculture minister who, as Berlaymole has reminded us, is already preparing for the French EU presidency later this year, makes frequent reference to neo-Malthusian concerns about food shortages in Europe. A report in this week’s European Voice (link requires subscription) reports that Barnier, a former European Commissioner and French foreign minister, is coming up with some truly nostalgic lines, describing the CAP as a ‘strategic asset’, and arguing:

“Agricultural production allows us to export, to create jobs… We need [the CAP] to make Lisbon a success…. We have to protect ourselves. It’s not protectionism. I’m concerned by a very liberal ideology which is even contested in Washington, as you can see during the presidential campaign, which says let’s open all the door and windows. Food is not televisions or cars. You can’t leave all that to the laws of the market.”

Policy-makers across the Atlantic should be warned: committed protectionists in Europe will quickly jump on loose talk on trade during US election campaigns to justify strengthening Fortress Europe.

Back to the nineteenth century… The Economist magazine was founded in 1843 as a propaganda sheet for the British Anti-Corn Law League, a kind of proto-Make Trade Fair campaign which successfully agitated against tariffs on agricultural imports (the Corn Laws were originally introduced on the recommendation of a certain Thomas Malthus, who feared the consequences of Britain becoming dependent on agricultural imports). Today’s Economist stays true to its origins by arguing that free trade is the best guarantor of plentiful supplies of food at reasonable prices. It also argues that the current era of high commodity prices and bigger profits for farmers offers a rare window of political opportunity for the dismantling trade barriers and farm subsidies. After all, if farmers can now make a decent living from the market, do they really need state-funded income support as well? But of course they do, says Barnier, because food prices could go down as well as up:

“Who can say that prices won’t go down if Oceania starts producing massively?”

The lesson of all this is pretty simple. Malthusians and trade protectionists have long been bed-fellows and as we head into the hurly-burly of the CAP health check, I have no doubt we will see plenty more arguments for preserving or even enhancing the protectionist elements of the CAP that are founded upon scaremongering about Europe’s ability to feed itself. They were wrong then, and they are wrong now.

One Reply to “Churchill, Malthus, Brown, Barnier and agricultural protectionism”