CAP Pillar 1 direct payments were originally introduced to compensate farmers for the reduction in intervention support prices following the MacSharry reforms in 1994. This was an important and necessary step to help farmers adjust to a new economic situation. However, assistance for adjustment should only be temporary. As the years have passed, the argument that direct payments are intended as compensation payments has become less and less credible. As result, a number of alternative rationales for the continuation of Pillar 1 direct payments have been proposed.
These payments are variously justified as addressing low farm incomes, as a necessary support for EU food security, as providing a safety net for farmers against unexpected market shocks, as compensating for higher regulatory standards and as ensuring more sustainable management of natural resources. These are all important policy objectives, but there is little evidence that decoupled area-based payments are an effective, efficient or equitable way of achieving these objectives (these arguments are spelled out more fully in my recent paper for the RISE Foundation).
Who benefits from direct payments?
The argument that direct payments are necessary to support low income farmers is particularly egregious. As spelled out on this blog on a number of occasions (see here and here) the bulk of direct payments go to relatively well-off farmers. The latest DG AGRI figures on the distribution of direct payments for the financial year 2015 (reflecting payments to farmers in 2014) confirm that the old adage that 80% of payments go to 20% of farm holdings is alive and well – indeed, the distribution is even more extreme in Bulgaria and Romania.
These figures reflect the last year of the pre-2013 CAP period. They do not take account of the changes towards a more equal distribution introduced in that reform – external convergence which shifted payments towards farms with lower incomes in the newer Member States, internal convergence which shifted payments from larger, more intensive farms to smaller, more extensive farms within Member States, degressivity and capping, and the introduction of the redistributive payment in some Member States. Thus, the next set of figures reflecting the first year (2015) of the 2013 CAP will show some reduction in the degree of inequality in the distribution of farm payments, but because of the various exemptions and exceptions to these measures included in the legislation, the change is likely to be limited.
That direct payments are distributed unequally is widely known. What is not so widely known is the relatively small number of farm holdings which are the main beneficiaries of the system. Data extracted from the DG AGRI statistics on the distribution of payments in the financial year 2015 show that just 131,000 farm holdings received just less than 33% of the entire national envelopes for direct payments and, indeed, almost 10% of the entire EU budget.
One wonders just what services these farms are providing to the taxpayer that justifies giving them almost 10% of the entire EU budget. The €13.7 billion going to this small number of farm holdings is far greater than the entire EU budget for security and citizenship of €2.0 billion, the entire budget for Global Europe of €7.9 billion, and even the entire EU administration budget which attracts so much unfavourable comment of €9.0 billion in that year.
These generously-supported farms (all those receiving more than €50,000 per annum) accounted for just under 2% (1.8%) of all beneficiaries of direct payments and just over 1% (1.2%) of all farm holdings in the EU.

The second table below shows where these farms are to be found. Just over one-quarter are found in France alone, with many of the remainder in Germany, UK, Spain and Italy. But there are also significant numbers in some of the newer Member States such as Hungary, Poland, Bulgaria, Czech Republic, Romania and Slovakia where large agribusiness companies now operate the holdings of former state farms and large cooperatives. 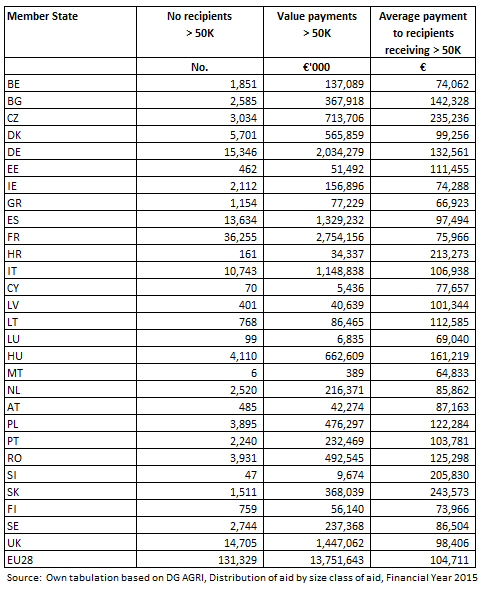 Some will point out that on these larger farms there may be a number of agricultural employees. Indeed, Member States were allowed to take into account salaried labour intensity when applying the degressivity mechanism included in the 2013 reform. Degressivity required Member States to reduce basic payments over €150,000 per farm by a minimum of 5%. Member States could opt for any reduction percentage up to 100% (capping). Nine Member States opted to cap payments at amounts between €150,000 and €600,000.
Member States were allowed to subtract the value of salaries paid from the amount of direct payments received before the application of these thresholds. The net result has been that the degressivity/capping mechanism has had virtually no effect (I estimate that degressivity/capping reduced the direct payments national envelopes by a mere €109 million in 2015, two-thirds of which occurred in Hungary, see Table 3 of this European Parliament report).
Allowing the deduction of wages and salaries from the amount of direct payments received in order to avoid the consequences of degressivity/capping has absolutely no justification. There is no evidence that employed workers on these farms benefit in any way from these payments – wage levels are set in local labour markets. Thus the benefits of these payments go entirely to the owners of these farms, whose need for such high levels of income support can be questioned.
Capping is not the answer
In the light of these arguments, it might seem that the solution is to cap direct payments at a much lower level (say, €50,000). This would then focus payments on farms with (relatively) lower farm income. But this is no solution to the problem of justifying direct payments as a way of providing income support to low-income farm households.
The fundamental point is that a low income from farming is a very poor proxy for low household income. In most European countries, around 40% of all farms in the FADN sample have off-farm employment, and the proportion for smaller farms is even higher. For many of these pluri-active farmers, the income from farming is not the main source of household income. This group includes both professionals who may have inherited a family farm as well as smaller farmers who do some construction work or drive a lorry in order to make ends meet (for further discussion on farm income issues, see these posts by Jean-Christophe Bureau, Ulrich Koester and Jens Peter Loy, and Berkeley Hill).
Granting income support to households simply on the basis that they have low incomes from farming means these payments will be poorly targeted. Of course, farm families in poverty and with low household incomes exist in the EU; the way to help these families is through social welfare mechanisms and tax credits, not through agricultural policy.
Providing payments to small farms just because they are small is sometimes supported on the basis that this slows down structural consolidation of farms and helps to maintain employment in agriculture. In a previous post, I noted that this policy is more likely to reduce overall employment levels than to create jobs, and that there are more effective means of supporting the viability of small farms than simply direct handouts.
It is not a problem if large farms receive large payments in return for providing valuable services to society as a whole which are not remunerated through the market place. Contract-based payments of this kind allow society to see what it is paying for. There is no such clarity in the current system of area-based direct payments.
Conclusions

The fact that almost 10% of the total EU budget of around €145 billion is given to just over 130,000 farm holdings without any obvious benefit to the EU taxpayer is clearly wrong. Production on the land farmed by these large, well-structured holdings is not at risk if these payments were not made. EU direct payments simply serve to underpin the value of this land, a value which has greatly increased in recent decades, to the benefit of a relatively small number of people who are the beneficial owners of this land. This must be changed.
This post was written by Alan Matthews

One Reply to “Does capping direct payments make sense?”