Every so often the debate about how far and how fast powers should be transferred from member states to the Union level within the EU and vice versa gains momentum. This debate about the optimal degree of centralisation or decentralisation in policy-making is known as the debate about subsidiarity in EU terminology.
The principle of subsidiarity is now part of the Lisbon Treaty but there are many observers who feel that this does not work very well. The optimal degree of policy centralisation is part of the debate on the response to the Eurozone crisis as well as a key element in David Cameron’s demand in his London speech in January 2013 for the repatriation of powers from the Union to member states.
Subsidiarity and agricultural policy
Economists take a very functional approach to subsidiarity. Drawing on the economics of federalism or multi-tier government, economists see the allocation of powers as a balance between taking decisions as close to voters as possible to maximise the chances that voters’ preferences are realised, while recognising the realities of interdependence which can justify the centralisation of powers. Centralisation is warranted particularly where decisions by one government unit have externalities (positive or negative) for others, or where there are significant economies of scale or scope in implementing policy. This proves to be a very powerful tool-kit in helping to understand whether citizens are likely to be better off with more centralised policies or not.
This framework has been applied in a rigorous way to assigning the relative roles of the EU and the member states in agricultural policy by Harald Grethe, now Professor of Agricultural and Food Policy at the University of Hohenheim (see chapter here). He argues that assigning responsibility for setting the rules for the single market in agricultural products to the EU level is entirely appropriate. He also sees a role for some agri-environment policies which have EU-wide significance, but otherwise he argues that much of current EU agricultural policy (direct payments and the remainder of Pillar 2 expenditures) would be better left to member states to decide.
Is agricultural spending higher under the CAP?
A new study by the Bertelsmann Foundation which attempts to quantify the value added of EU spending including on agricultural policy introduces a new twist to this debate. The study argues that the CAP creates European added value insofar as it prevents subsidy races between the member states while also reducing political and economic distortion. It estimates that, in 2010 alone, a renationalized agricultural policy would have cost member states around €23 billion more than it does presently through the EU budget.
This conclusion is based on some fascinating empirical work carried out by Professor Stefan von Cramon-Taubadel and colleagues at the University of Göttingen published in the Bertelsmann study under the title which I have borrowed for this post.
The question the researchers set out to answer is whether public expenditure on the CAP is lower or higher than the sum of the public expenditures on the national agricultural policies that would be implemented in its absence. If we think that current agricultural policy on balance makes EU society worse off, then if the CAP helps to curtail agricultural policy expenditure compared to what member states themselves would spend if most agricultural policy expenditure (apart from the rules governing the single agricultural market) were renationalised, then this would be an argument in favour of centralising agricultural policy at the EU level.
The research findings are also interesting in their own right as they contradict the conventional wisdom that centralising agricultural spending at the EU level has in the past helped to inflate the overall level of CAP expenditure. Since the CAP is financed out of the EU budget, each member state has an incentive to push for measures that increase CAP outlays for its own farmers. This is because each member state only has to foot a portion of the bill for these measures in accordance with its share in financing the overall EU budget.
This behaviour is called the ‘restaurant table’ effect after the observation that, if diners in a restaurant agree beforehand to split the bill equally, everyone has an incentive to order the more expensive dishes, so the overall cost of the meal will be higher than if everyone were responsible for paying their own bill. According to this reasoning, agricultural policy coordination at the EU level will lead to more and not less public expenditure than national agricultural policies (for a contrary view that there is no theoretical basis for the supranational structure of the CAP to generate higher expenditure see this paper by Pokrivcak, de Gorter and Swinnen 2001).
Methodology

Their results are summarised in the first graph below. They find a relatively close correspondence between CAP expenditure and simulated expenditures on national agricultural policies for the EU 21 in most years. However, there appears to be a break in the data between the years 2004 to 2006 and the later period. In the earlier years, the CAP was more expensive than or roughly as expensive as the simulated national agricultural policies; since 2007 the simulated national policies have been consistently more expensive that the CAP. The researchers argue that limits on the growth of the EU budget, and on the share of CAP spending in that budget, may have disciplined agricultural policy and provided a counterweight to national preferences for higher levels of agricultural protection and support. 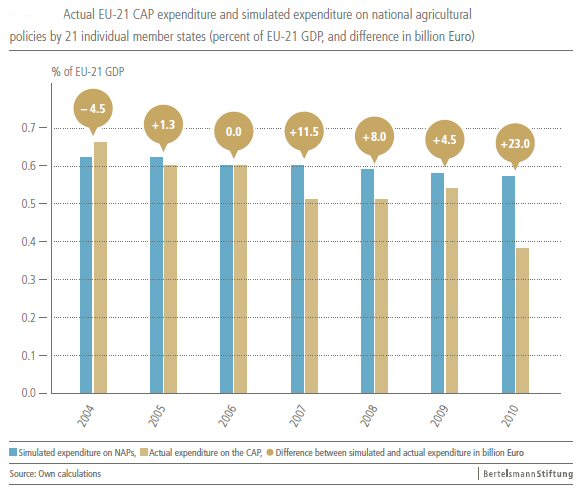 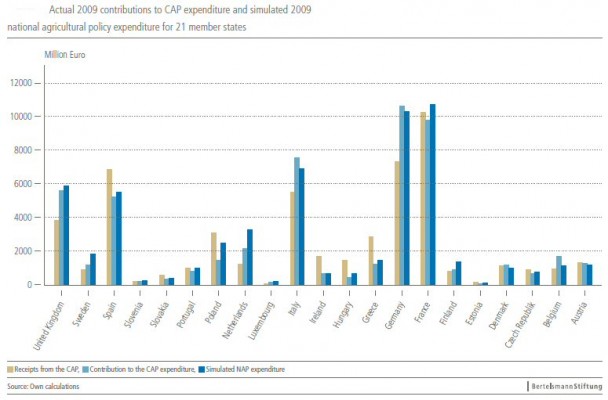 The conclusion that the centralised CAP is now acting as a brake on EU agricultural spending as compared to what we would predict under renationalised agricultural policies will be controversial. As the authors themselves recognise, the procedure they use means that there is inevitably a margin of forecast error around the predicted levels of national spending so we cannot be confident that the differences shown in the first diagram are really significant and not just the result of statistical chance.
Update 1 August 2013: One commentator raised the point that there seems to have been a recent ‘paradigm shift’ in national subsidy expenditure, for example, for coal, fisheries and other industries, and this might affect the willingness of countries also to pay for agricultural subsidies if these were renationalised. The model includes a government ‘fiscal space’ or ‘ability to pay’ variable (the ratio of government debt to GDP). It is a proxy variable, but to the extent that it is correlated with other indicators of a ‘paradigm shift’, and to the extent that this paradigm shift also occurs in the non-EU countries which are the basis for the econometric estimation, then in principle this issue might be addressed. The problem, however, might lie in imposing a linear structure in the estimating model, such that the parameter value of the relationship is assumed to be stable over the whole of the estimation period. While the coefficient has statistical explanatory power, it could lead to substantial one-sided errors just in the past few years if public and political attitudes to subsidies have changed in the most recent past, which could lead to an over-prediction of the willingness to subsidise agriculture from national budget expenditure. It would be interesting to explore if allowing a more flexible structure (by introducing a quadratic term, for example) would add to the explanatory power of the model and lead to different predicted national expenditure totals.
But the findings do focus attention on the changed institutional environment for EU agricultural policy-making. Budgetary expenditure is no longer a by-product of market price support which was the context in which the ‘restaurant table’ argument was developed. Today it mainly reflects spending on direct payments which have been fixed in nominal terms meaning a steady decline in real terms.
The CAP budget in the next multi-annual financial framework is set to fall by 14% in real terms between 2013 and 2020. Some of us would have wished to see a more rapid fall in CAP spending in favour of other EU budget headings. What this research suggests is that, if agricultural policy had been renationalised, agricultural policy spending would be falling by even less.