The Republic of Ireland will hold a referendum on ratification of the EU’s Lisbon Treaty on 12 June 2008. The Irish Farmers Association is urging a No vote, on the grounds that the EU’s push towards more open world markets in agriculture could expose them to competition from overseas, notably from Latin America.

Ireland gets way more than it’s fair share of EU farm handouts. And this fact will not be lost to other member states if Ireland votes to derail the Lisbon Treaty. The EU is currently engaged in a fundamental, ‘once in generation’ review of its budget. The main target for cuts appears to be the agriculture budget, which accounts for around 45% of all EU spending. 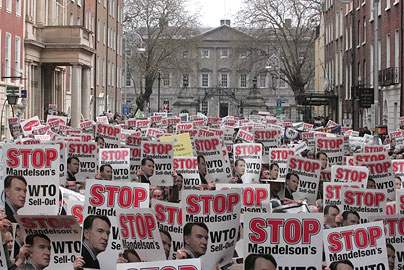 Here are some facts that might be of interest:

– Ireland receives €10,577 in CAP direct payments per farm worker (the highest in the EU), and €279 per hectare of farmland.

– Ireland’s farm sector not only benefits from cash payments from the EU, but a high level of tariff protection on its key sectors of beef and dairy. According to the OECD which tries to measure these things, beef farmers in Europe received border protection worth €10 billion in 2006, around 43% of the value of total EU beef production. This hidden consumer tax on the price of beef represents 43% of the total revenue of EU beef farmers.

– 75% of Ireland’s land area is classified as ‘less favoured’. This means it gets the EU’s area-based compensation payments under the Disadvantaged Area Compensatory Allowance of EUR 257 million in 2006.

– Agriculture accounts for 0.9 per cent Ireland’s GDP but 28 per cent of Ireland’s greenhouse gas emissions, chiefly because of the methane emissions of its large subsidy-driven cattle herd. Ireland is currently 11 per cent above its Kyoto Protocol target.

Nobody likes to be blackmailed, and if Irish farmers have a hand in throwing the EU into another 2005-style constitutional turmoil, this will not be forgotten. Irish farmers get more than most from the EU, they may live to regret biting the hand that feeds them.

3 Replies to “Irish farmers: biting the hand that feeds them?”