After the December 2012 Council proposed amendments, the vote of the agricultural committee of the European Parliament (COMAGRI) on January 24 2013 de facto kills any hope of deriving serious biodiversity benefit from the CAP reform. The COMAGRI amendments are particularly fatal to the Ecological Focus Area (EFA) measure, which is now nearly ‘as dead as a dodo’. The fact that the COMAGRI amendments largely restate the Agricultural Council’s draft position on the EFA leaves little hope for future debates between the Parliament and the Council. The conclusions of the European Council on February 8, 2013 can be seen as the burial of the EFA.
Many economists and think tanks doubted that the combination of Pillar 1 payments and green requirements was the most cost-efficient way to promote biodiversity and were not enthusiastic about the EFA idea. It is now time for them to realize that while Pillar 2 payments will be cut, Pillar 1 payments will be maintained but without any serious biodiversity requirement.
How the EFA proposal has been neutered
Both the Agricultural Council’s decision and the COMAGRI vote relax many greening aspects of the Pillar 1 payments proposed by the Commission (1). The Commission wanted to condition all direct payments in respect to the conditions laid out for the Green Payment, so that there would be some cross-compliance between the different layers of payments (2). The COMAGRI vote removed all potential links between getting the Basic Payment and complying with the requirements of EFA, permanent pasture preservation and crop rotation, echoing the draft position of the Council in December 2012. Any prospect of a leverage effect between the Green Payment and other payments is now history. At the same time, environmental requirements of the Basic Payment tended to be relaxed compared to the current situation (for a comparison of the different positions and amendments see this post).
The Green Payment is now clearly optional. In addition, the conditions to obtain the Green Payment have themselves been neutered by the various amendments of the Commission’s text proposed by both the COMAGRI and the Agricultural Council. These amendments look like technicalities, but in practice, they water down considerably the EFA requirements (3). With the COMAGRI amendments, permanent crops would be removed from the EFA constraint; some elements that are not part of the arable land could be counted against the requirement; land planted with nitrogen fixing crops would be part of the EFA; EFAs could be used for production provided that no chemical input were used. Farms below the size of 10 hectares would be exempted from the obligation of EFAs; rather than imposing that EFA cover 7% “of their eligible hectares as defined in Article 25(2), excluding areas under permanent grassland” to obtain the Green Payment as stated in the Commission proposal, the COMAGRI voted for 3% obligation, with a move to 5% in from 2016 (4). The COMAGRI also included some possibilities for Member States to implement 3% EFA at the regional level, which could help in building adjacent EFAs but might also lead to count as EFAs some fallows that exist “naturally” in some particular areas. Definitions of some technical terms were also extended by COMAGRI amendments, all of them involving a relaxation of the requirements.
Many of the COMAGRI amendments on EFAs converge with the stocktaking of the Agricultural Council in December 2012, as summarized in the conclusion of the Cyprus presidency. Agricultural ministers also proposed to broaden the definition of EFAs; to leave Member states with latitude to define which areas should be considered for ecological focus in their territory; to exempt farms smaller than 15 hectares from EFA requirements; to consider that some farms de facto meet the requirement, provided that they dedicate 70% of their land surface to grazing or herbaceous production; to remove permanent crops and leguminous crops from areas subject to the EFA requirement; and to allow Member States to implement half of the EFA requirement through collective actions undertaken at a different geographical level in order to obtain adjacent ecological focus areas.
Equally important are the flexibility provisions (Member States can substitute environmental certification schemes for one or more of the greening measures) and ‘green by definition’ equivalence (all farmers enrolled in agri-environment measures are automatically eligible for the green payment) in the COMAGRI amendments and in the Cyprus presidency conclusions, which considerably weaken the Commission’s original proposals.
So, what is left of the EFAs?
When it drafted the 7% EFA requirement proposal, the Commission estimated that at least 3% of the land on almost any farm qualifies as EFA, once existing buffer strips, field borders and field sections where tractors can hardly access were all taken into account. Therefore, one can safely consider that there is no longer any serious practical requirement left for the farmer after the adoption of the COMAGRI provisions on EFAs.
The COMAGRI vote could theoretically be modified in plenary session in March 2013, but given that the few MEPs who have some expertise on CAP issues sit in the COMAGRI it is hard to imagine that the Parliament as a whole will inverse the COMAGRI decisions on technical issues. It will more likely focus on CAP budgetary issues. In any case, the blow to the EFAs will likely be fatal since the positions taken by Agricultural ministers in December 2012, i.e. more or less the same as the COMAGRI amendments, were largely endorsed by the Heads of States (5). Indeed, the conclusion of the European Council on February 8 2013 states that

This can be viewed as the final nail in the coffin for EFAs.
The EFA section of the October 2011 Commission’s proposal had a frosty reception by farmers’ organizations. Opposition from the COPA-COGECA was very strong. Many economists also criticized the design of the EFA proposal. Some questioned the impact of a ‘one size fits all’ measure when benefits and compliance costs are heterogeneous. Most economists actually support greater focus of CAP funds on the environment and the provision of public goods, but few have sympathy for the Pillar 1 approach. This explains why the farm lobby attacks against the EFAs have not been seriously opposed by academics and think tanks. Even the environmental NGOs were critical, arguing that scattering of the protected EFAs would limit the benefits for those species that require a more concentrated habitat. Sadly, the Council and the COMAGRI leave everybody with the worst of all worlds, i.e. large Pillar 1 payments without (serious) EFA requirements.
What is the damage to biodiversity?
Fostering biodiversity is tricky. In ecology, few scientific results hold independently of local conditions and species. Population dynamics depend on multiple factors, face complex non-linearities, path dependency and tipping points. The relation between agricultural production and biodiversity indicators can be highly convex (so that a limited intensity of agriculture already results in large biodiversity losses, e.g. type a in the figure below) or concave (in which case low impact on biodiversity is maintained until high levels of intensity, e.g. type b). Some species, especially farmland specialists, also need some degree of agricultural activity to maintain their habitats but suffer from high levels of intensification (e.g. type c). The consequences of sparing some land for biodiversity conservation as originally proposed in the case of EFAs are therefore very different across situations. The much debated issue of whether land sharing à la EU is more efficient than land sparing à la US for protecting biodiversity clearly depends on the shape of the so called density dependence function: land sharing, such as conservation reserves or national parks, will be better adapted to an a-type than to a c-type or b–type function in the figure below, where farmers can more easily be put in charge of the provision of biodiversity services. The shape of these functions is strongly dependent on the community considered and shifting from an a-type to a c-type function is likely to depend on whether native species or farmland species are considered (see reference [34] below for example). 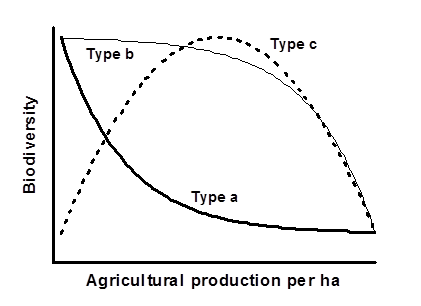