The European Parliament secretariat’s Note European Council Conclusions on the Multiannual Financial Framework 2014-2020 and the CAP also contains a detailed breakdown of Pillar 1 direct payment envelopes by member state for the two MFF periods, allowing us to see which countries are winners and losers under the decisions taken by the European Council.

The EP’s note calculates the national envelopes for each member state in the 2007-2013 period on the assumption that each country received the full 100% of its envelope, thus ignoring the impact of the phasing-in of these payments in the new member states. While this exaggerates the actual payments these countries received in the current MFF period, it provides a better basis for assessing the real impact of the European Council conclusions on the relative amounts allocated to each member state.

Its figures also take account of the fact that direct payments are held constant in nominal terms, so they fall in the baseline in real terms. This allows the analysis to concentrate on the impact of the discretionary decisions taken by the European Council. Adjustments are also made for compulsory modulation of funds to Pillar 2 in the 2007-2013 period plus other transfers from EAGF to EAFRD agreed in the Health Check. For the 2014-2020 period, the €2.8 billion allocated to the crisis reserve has not been deducted. If this reserve is required, then less money will be available for direct payments than shown in the figures below.

The overall reduction in direct payments

In order to adjust the overall level of expenditure under Heading 2 while respecting the principles of phasing-in of the direct payments as forseen (sic) in the Accession Treaties, the EU average level of direct payments in current prices per hectare will be reduced over the period.

While the European Council mandated a reduction, the overall cut is very modest. The amount of money allocated to direct payments for the EU-27 is reduced by 3.2% relative to the baseline (the analysis here is conducted in terms of constant prices, but if the baseline and the actual MFF outcome for 2014-2020 were both restated in current prices then the percentage reduction would remain the same). This figure is slightly higher than the discretionary reduction calculated for Pillar 1 between the two MFF periods in the earlier post, partly because the latter was an end-year to end-year comparison but mainly because the figures below take more complete account of the hypothetical full phasing in all direct payments in the new member states in the 2007-2013 MFF.

Of course, even if these funds are not transferred to farmers as direct payments, they continue to be transferred as crisis payments but with a different allocation key. Thus the key point remains that overall direct transfers to farmers through Pillar 1 will fall by just 3.2% between the two MFF periods as a result of the European Council decision.

The impact of external convergence

Armed with this information, it is also possible to identify the winners and losers from the second discretionary element in the European Council conclusions, namely, to pursue external convergence according to the following formula.

Direct support will be more equitably distributed between Member States, while taking account of the differences that still exist in wage levels, purchasing power, output of the agricultural industry and input costs, by stepwise reducing the link to historical references and having regard to the overall context of Common Agricultural Policy and the Union budget.
All Member States with direct payments per hectare below 90% of the EU average will close one third of the gap between their current direct payments level and 90% of the EU average in the course of the next period. However, all Member States should attain at least the level of EUR 196 per hectare in current prices by 2020. This convergence will be financed by all Member States with direct payments above the EU average, proportionally to their distance from the EU average. This process will be implemented progressively over 6 years from financial year 2015 to financial year 2020.

The impact of external convergence is calculated in the table below (Column 4) as the difference between each country’s baseline 2007-2013 allocation reduced by 3.2% (Column 3) and the actual envelope agreed for 2014-2020 (Column 2). The percentage changes are calculated with respect to the baseline in Column 1. There are two striking results in the table.

When the marginal overall cut of 3.2% in direct payments is added in, only five countries (the three Baltics plus Romania and Portugal) will see an increase in their direct payment envelopes compared to what they would have expected under a continuation of the existing policy. If the comparison is made with actual direct payment allocations in the current MFF, then of course more of the new member states will experience an increase because of the effect of the phasing in of payments over time.

We conclude that the outcome of external convergence was hardly a major revolution in the distribution of payments. Just over 1% of direct payment envelopes has been reshuffled between the member states, with a real difference only for the three Baltic states. As the figure below shows, significant differences in levels of payments per ha will continue to exist within the Union. 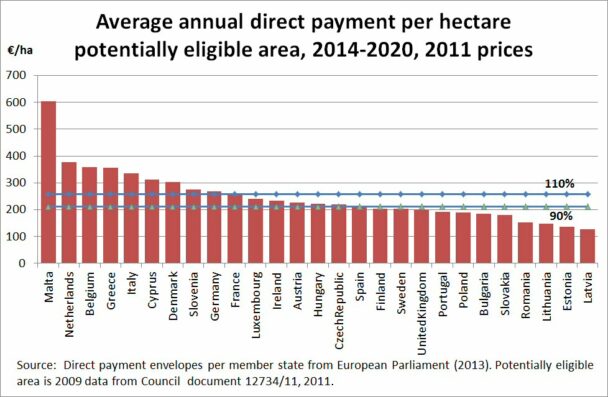