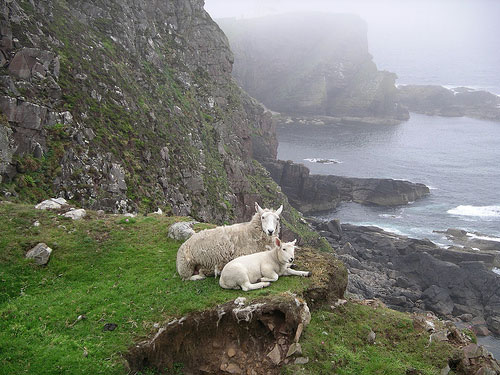 In the previous post I presented two tables showing Pillar 1 and Pillar 2 payments per hectare by member state which were prepared by the Scottish Executive in support of its campaign to get a higher share of the UK CAP direct payments national ceiling. My focus was on the general story which the tables told on how payments per hectare are distributed across member states, but the tables also show the comparable figures for Scotland as if it were a member state. They show that Scotland expects to be at the bottom of the EU league in terms of Pillar 1 and Pillar 2 payments per hectare by the end of the next MFF period.
However, a press release issued by George Lyon MEP claims that the figures showing that Scottish farmers are poor relations in Europe are simply not credible. George Lyon represents the Liberal Democratic Party in Scotland which is a political competitor of the Scottish National Party which makes up the Scottish Executive. The press release is worth quoting in full:

As usual, Richard Lochhead (the Scottish Government Cabinet Secretary for Rural Affairs and the Environment, ed.) is guilty of selective quoting when it comes to Scottish farmers’ relative position on CAP funding.
In fact, Scottish farmers received an average Single Farm Payment of £25,751 per head, which is the second highest in the European Union and five times higher than the EU average of five thousand euros per farmer.
Scotland also has the highest payments per farmer in the UK, some eight thousand pounds per head higher than English farmers, who are in second place in the UK league table.
Scottish farmers enjoy these high payments as a result of all their hard work building up the size of their farms in the past, as their payments are based on what they produced in 1999/2000/2001, not on some arbitrary Government decision.
The UK Government has also negotiated a two per cent rise in the direct payments allocated to the UK, which Scotland will get its fair share of.
As I have pointed out many times, when you bring in the 1.7 million hectares of land in Scotland which is eligible for direct payment but does not currently receive payments under the current historic system, it has the obvious effect of giving Scotland a low per hectare payment rate.
This will have to be addressed within the UK once the Scottish Government decides to abolish the current historic payment system and takes a decision on whether to include these areas in the new Area Payment Scheme or to use some of the available flexibility to exclude them from the new payment system.
Richard Lochhead’s assertion that we are the poor man of Europe when it comes to CAP payments frankly does not stand up to any kind of scrutiny when you know the facts.

It is interesting to observe how a different story emerges when the payments data are presented on a per farm rather than a per hectare basis. Indeed, if the purpose of agricultural payments is to support farm income rather than, say, sustainable land management, then a per farm rather than a per hectare comparison may be more informative.
Using the per farm basis is also the favoured indicator of those seeking to defend EU agricultural support in comparison with the US, as it can be interpreted to show that farm subsidies are higher and growing faster in the US than in the EU.
Which indicator to use in comparing agricultural support depends on the purpose at hand, and there is no ‘correct’ indicator in all circumstances. When the OECD compares agricultural support across countries, for example, it expresses it as a proportion of the value of agricultural production using the %PSE indicator, or as a share of GDP. One can also compare countries looking at the importance of support or direct payments in farm income, as DG Agri does in this slide.
All of these indicators give a different ranking of countries, and all have their uses depending on the question being asked. And it should be no surprise that political opponents will choose those figures that best suit their case.
Photo credit: The Granary