The Scottish Government is currently waging a campaign for a higher share of the UK national envelopes for Pillar 1 and Pillar 2 of the CAP. It claims that Scotland is almost certain to find itself at the bottom of the EU per hectare league table in terms of both Pillar 1 and Pillar 2 support by the end of the next CAP period because, as a region, it could not directly benefit from the ‘external convergence’ formula used to increase payments in those countries with currently low payments per hectare.
As part of its campaign, the Scottish Government has prepared two tables showing the levels of payment per hectare for both Pillar 1 and Pillar 2 in each member state currently and on average over the 2014-2020 MFF period to bolster its case. As the tables will be of more general interest, I reproduce them below.
Pillar 1 direct payments
The comparison of Pillar 1 payments per hectare is shown in Table 1. Note that the figures for the coming period are expressed in terms of average receipts per hectare over the seven years, rather than projected receipts per hectare at the end of the period (in 2020). Also, all figures are presented in current (cash) prices without allowance for inflation. 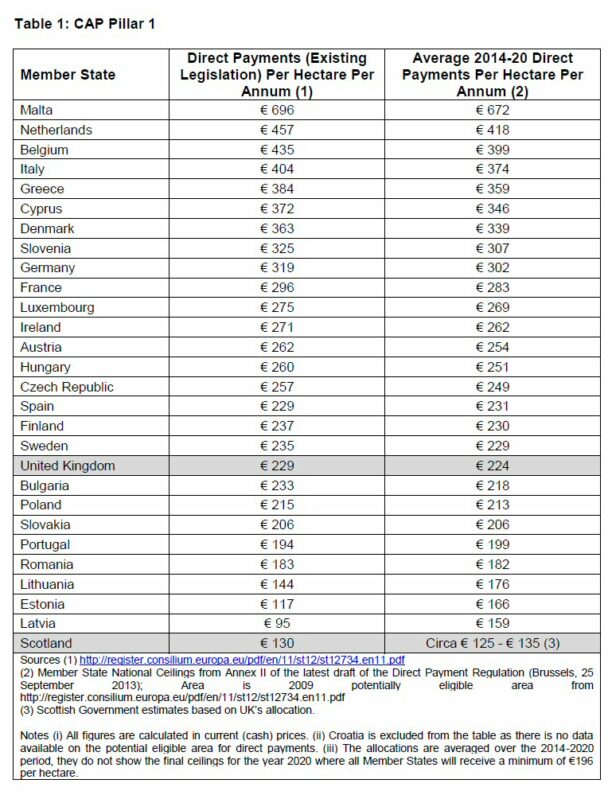 The two sets of figures are not directly comparable for Bulgaria and Romania. The first column (direct payments under existing legislation) assumes that payments are fully phased in in the new member states, whereas the second column reflects the actual payments these two countries will receive under the phasing-in process. This explains why Bulgaria and Romania are projected to receive less per hectare following the introduction of the CAP2020 ceilings in the table, even though in practice their receipts per hectare will increase. However, this qualification does not apply to the other member states in the table.
What stands out from the table is that the countries at the bottom of the table are either new member states or countries with large areas of extensive agriculture (Spain, Finland, Sweden and the United Kingdom, where of course the extensive Scottish Highlands play a role and help to explain the Scottish figures).
The MFF ‘external convergence’ formula does not alter the ranking of countries in terms of payment per hectare, although it does narrow the divergences between countries to some small degree (see further discussion below).
Pillar 2 payments

Table 2 shows payments per hectare for Pillar 2. Note that in this table area is measured as utilised agricultural area (from Eurostat) and not the potentially eligible area for Pillar 1 payments (from the Commission) used in the previous table. The 2007-13 figures include funds transferred from Pillar 1 under the modulation mechanism.
While expressing RD receipts per ha UAA is informative, there has never been a target for the distribution of rural development funds per hectare. In the Commission’s original draft rural development regulation, it was stated that Pillar 2 funds would be allocated across member states taking into account (a) objective criteria linked to the objectives of the rural development fund (the competitiveness of agriculture, sustainable management of natural resources, and balanced territorial development of rural areas); and (b) past performance (Art 64). The Commission’s impact assessment explored various formulae meant to capture these objective criteria, but found that these results always differed wildly from the current distribution.
The Commission’s formulation was repeated in the European Council MFF conclusions in February 2013 although sweeteners were also given to member states facing particular structural challenges in their agriculture sector or which have invested heavily in an effective delivery framework for Pillar 2 expenditure. However, there has never been an explanation given as to what ‘objective formula’ was used to arrive at the numbers behind the Council’s MFF conclusions.
Instead, in the final regulation agreed between Council and Parliament these phrases explaining the basis for the allocation of Pillar 2 funds were removed, leaving no explanation or criteria for the distribution of RD payments across member states contained in the new Annex 1a to that regulation. In view of the horse-trading which went on to agree on these numbers, silence was clearly deemed the wisest course!

The table shows that the average RD payment per hectare (measured in commitment appropriations) in the EU-27/28 was €76/ha in the 2007-13 period and will also be €76/ha in the 2014-2020 period. At first sight this seems surprising, as one of the criticisms of this CAP reform has been that Pillar 2 funding has been cut, and indeed cut more sharply than Pillar 1. The explanation is the fact that these figures are in current prices whereas comparisons of the impact of CAP reform have been made in real prices.
Given the stability in the average nominal payment per UAA in the current and next MFF periods, it is easy to read off the winners and losers by simply identifying those member states whose average payment has gone up and those where it has gone down. As I showed in this earlier post, France emerges as the clear winner in the Pillar 2 allocations, with some other old member states (Italy, Finland, Greece and Belgium) also doing well.
Impacts on the distribution of payments

While payments per hectare in both Pillars will be more evenly distributed in the coming MFF period, the distribution of Pillar 2 payments per hectare (UAA) remains much more unequal than the distribution of Pillar 1 payments. A simple indicator of the inequality in the distributions is the relative ratio of payments per hectare in the top three countries to the amounts in the lowest three countries (for each Pillar I have omitted Malta as an outlier).
In the case of Pillar 1, the ratio decreases from 3.64 to 2.38; in the case of Pillar 2, the ratio decreases from 7.48 to 5.85. Thus the range of Pillar 2 payments per hectare is more than twice the range of Pillar 1 payments.
This in itself should not be surprising. The Commission has explicitly argued for an equal Pillar 1 payment per hectare across all member states. Rural development allocations (as a part of the EU’s structural funds) are supposed to be biased towards the weaker and lower-income regions, even if GDP per capita is not explicitly mentioned in the Commission’s ‘objective criteria’ (it was included in some of the formulae explored in the impact assessment).
However, how the actual allocations for the period 2014-2020 take this and other objective factors into account has not been revealed so far by the Commission.

3 Replies to “The distribution of CAP payments by member state”