Much of the recent discussion on agricultural matters in the fall-out from the UK referendum vote on Brexit in June has focused on the implications for UK agriculture. What agricultural policy will the UK pursue after Brexit? What type of trade relationship will it have with the EU and with other countries? What arrangements might be put in place for seasonal migrant workers who play an important role in the production of certain UK crops?

However, Brexit will also have implications for the agricultural policy of the EU. I previously explored these implications in general terms in this Eurochoices article. In this post, I look more closely at the effect that Brexit will have for the net budget balances (gains and losses) of the remaining EU Member States. This can have an important bearing on the positions individual Member States take when discussing a future CAP reform (see my previous discussion on the role of net budget balances in the CAP). I think the results are both interesting and surprising.

How to define CAP net balances

The EU budget is a unitary budget where revenue is not allocated to specific expenditure lines but goes into a general pot. DG BUDGET produces figures annually (in its spreadsheet Operating Balances of Member States) which allocate expenditure to MSs by individual spending lines (so we can know CAP Pillar 1 and Pillar 2 expenditure each year by MS).

However, there is only an aggregate figure for the revenue paid into the EU budget by each MS, broken down by the three main revenue sources. These are the Traditional Own Resources (TOR, essentially customs duties from applying the Common External Tariff), the VAT contribution, and the Gross National Income (GNI) contribution. We must first decide how much of each Member State’s revenue contribution is allocated to the CAP.

However, if we are interested in the financing of changes in CAP expenditure, then it is more appropriate to use an allocation key based on each country’s marginal expenditure source, which is the GNI resource alone. If other MSs are asked to contribute more to the CAP budget because of Brexit, their relative contributions will be based on their marginal shares in the GNI resource, and not the (weighted) average of their shares of all three own resources.

If the UK leaves the EU, then of course it no longer makes any CAP contribution. Even here, however, we can justify using the GNI key if the mental thought experiment we are conducting is that the UK no longer participates in the CAP, without taking account of the fact that Brexit would also mean withdrawing from all the EU’s other policies as well.

In practice, the GNI resource dominates the EU’s own resources (in 2015 it accounted for 70% of EU budget revenue). The GNI allocation key is also a good proxy for the distribution of VAT revenue contributions. Only the distribution of TOR receipts (customs duties) across MS follows a different pattern.

Using the GNI allocation key also has the advantage that it avoids having to deal with the ‘Rotterdam-Antwerp’ effect, whereby TOR contributions from Belgium and the Netherlands are artificially inflated because of customs duties collected on the import of goods through ports in these countries which are destined for other MS (when calculating the operating balances of MSs, DG BUDGET also excludes TOR contributions on the grounds that these are ‘genuine’ EU own resources and cannot be allocated to individual MS).

Thus, the CAP net balance for each country is defined as the difference between CAP receipts in that country and each country’s share of the total CAP budget determined by its GNI allocation key. As we will see in a moment, this simple formula needs to be adjusted to take account of the UK rebate.

Using the GNI own resource to work out MS CAP net balances and particularly the implications of Brexit must take account of the fact that the UK’s GNI budget share has been quite variable in recent years. The table below shows the UK’s share of EU GNI and its share of the EU budget’s GNI resource over the past five years. 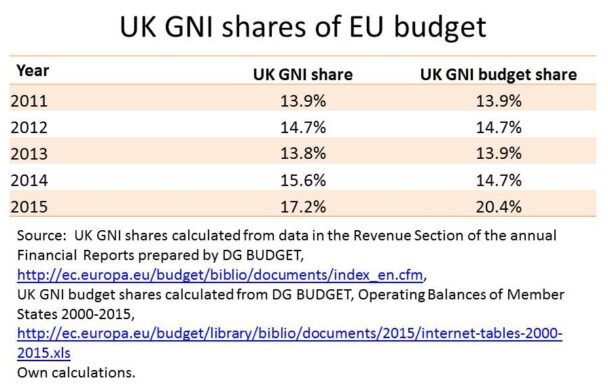 The UK’s relative share of the EU’s GNI jumps around quite a bit over time mainly because of exchange rate changes between sterling and the euro which can rapidly change the relative size of the UK’s economy from one year to the next. The GNI budget share more or less equals the GNI share in 2011-2013, but this relationship breaks down in the most recent two years.

This is due to the fact that the UK was systematically contributing too little to EU finances in previous years because its estimates of GNI were too low. When it finally reached agreement in late 2014 with Eurostat on how to measure its economy properly, the UK found itself richer than it thought. The EU promptly presented the UK with a bill of €2.1 billion to cover its underpayments for the years 2002-2013.

The UK was not alone in this, and seven other MSs also had exceptionally high additional amounts to pay in 2014. The resulting outcry resulted in legislation which allowed these MSs to defer the payment from 2014 to 2015. The fact that some MSs opted to pay their additional amounts in 2014 depressed the UK’s relative share in that year, while conversely, the fact that the UK opted to pay the full amount of its additional charge in 2015 increased its GNI contribution greatly in 2015.

Rather than try to guess what the UK share might be in a ‘normal’ year, I calculate the impact on CAP net balances as if Brexit had occurred in either 2014 or 2015, with the expectation that the expected impact will lie between these estimates.

As noted above, calculating CAP net balances should be a relatively simple matter. Each country’s CAP receipts can be identified in the DG BUDGET Operating Balances spreadsheet, while each country’s notional contribution to the CAP budget can be calculated by apportioning the cost of the overall CAP budget between countries according to the GNI budget allocation key.

However, the calculation is complicated considerably by the need to take into account the UK rebate on its overall net contribution to the EU budget. I leave the details of how this is done to a technical annex at the bottom of this post, and proceed directly to the results which are shown in the following table. 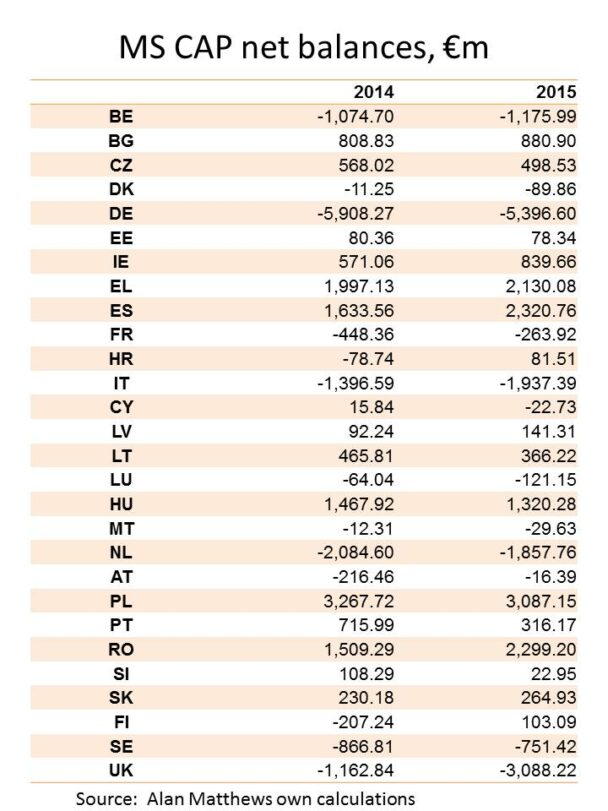 There is reasonable stability in the size of the net balances in both years (we discuss the UK figures in a moment). Only two countries show a change in sign between the two years, Croatia (which extraordinarily was a net contributor to the CAP budget in 2014 possibly because of the delay in rolling out its rural development programme) and Cyprus, which moved in the other direction and became a small net contributor in 2015.

As discussed in my previous post on CAP net balances, Poland is in absolute terms the big winner from the CAP while Germany is the big net contributor. Also as observed in my previous post, France is now a net contributor to the CAP, which is a potential game-changer when it comes to future negotiations on the CAP (a more detailed analysis shows that France is still a net gainer on Pillar 1 EAGF expenditure but this is more than offset by its substantial net contribution to the EAFRD rural development budget).

From these figures, we can deduce that, assuming that the EU would wish to maintain the same level of CAP spending in the other MSs after Brexit, the other MSs would have to find an additional amount of between €1.2 and €3.1 billion to cover the loss of the UK net contribution. As discussed previously, the ‘correct’ figure lies somewhere between these two extremes.

The impact of Brexit on CAP net balances

Two things happen once the UK exits the CAP. First, its net contribution must be divided up between the other MSs according to the GNI key. Second, the UK rebate mechanism falls away, including the ‘rebate on the rebate’ that four MSs (DE, NL, AT and SE) have obtained (see the technical annex for a further explanation). It turns out that this latter change plays the dominant role in the redistribution of CAP net balances that would follow a Brexit, as shown in the following table. 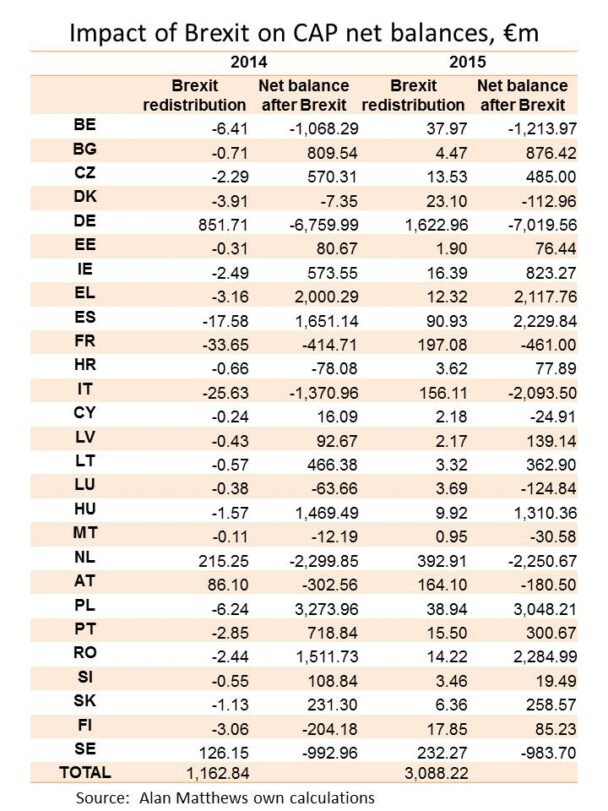 It is widely understood that the UK has been both a net contributor to the EU budget and to the CAP budget. Brexit will mean that other Member States will have to pay more into the CAP budget if they wish to maintain the existing level of CAP expenditure.

This blog post makes two contributions. First, it shows that using recent budget data to make estimates of the likely impact of Brexit on other MS net balances must take account of the unusual volatility around the UK net contribution in the past two years, due to the re-evaluation by Eurostat in 2014 of the size of the UK economy. Second, it shows that the impact of financing the hole in the CAP budget left by Brexit will not be proportional across MS. Instead, it will be concentrated on the four MSs which currently benefit from a ‘rebate of the UK rebate’.

Whether Germany and the Netherlands, in particular, will be willing to shoulder this additional burden must be an open question.

The CAP net balances in this post are calculated using data in the DG BUDGET spreadsheet Operating Balances of Member States which in turn are based on the methodology described here. Expenditures and revenues are entered in the year when paid or received by the EU budget and not when accrued. Expenditure financed from earmarked revenue is presented separately and is not included in expenditure allocated to individual MSs. Around 2.5% of CAP expenditure is thus not taken into account for this reason in both years.

The method of calculating the UK rebate is set out in Article 4 of the Council Own Resources Decision 2014 which applies from 1 January 2014 when ratified by all MSs.

This means that the UK’s contribution is calculated as if the budget were entirely financed by VAT. The rebate is calculated by taking the difference between the UK’s percentage share of the VAT contributions to the EU budget and its percentage share of expenditure, multiplying it by total expenditure, and then multiplying this figure by 0.66. There are other minor adjustments to the rebate calculation (windfall gains in the rebate calculation caused by the introduction of VAT capping, and the GNI resource, and gains made from increased collection costs for TOR are excluded). The gory details of the calculation are set out in the Commission Working Document Calculation, financing, payment and entry in the budget of the correction of budgetary imbalances in favour of the United Kingdom (“the UK correction”).

A spreadsheet outlining the calculations of the CAP net balances and the impact of Brexit on these net balances can be downloaded here.