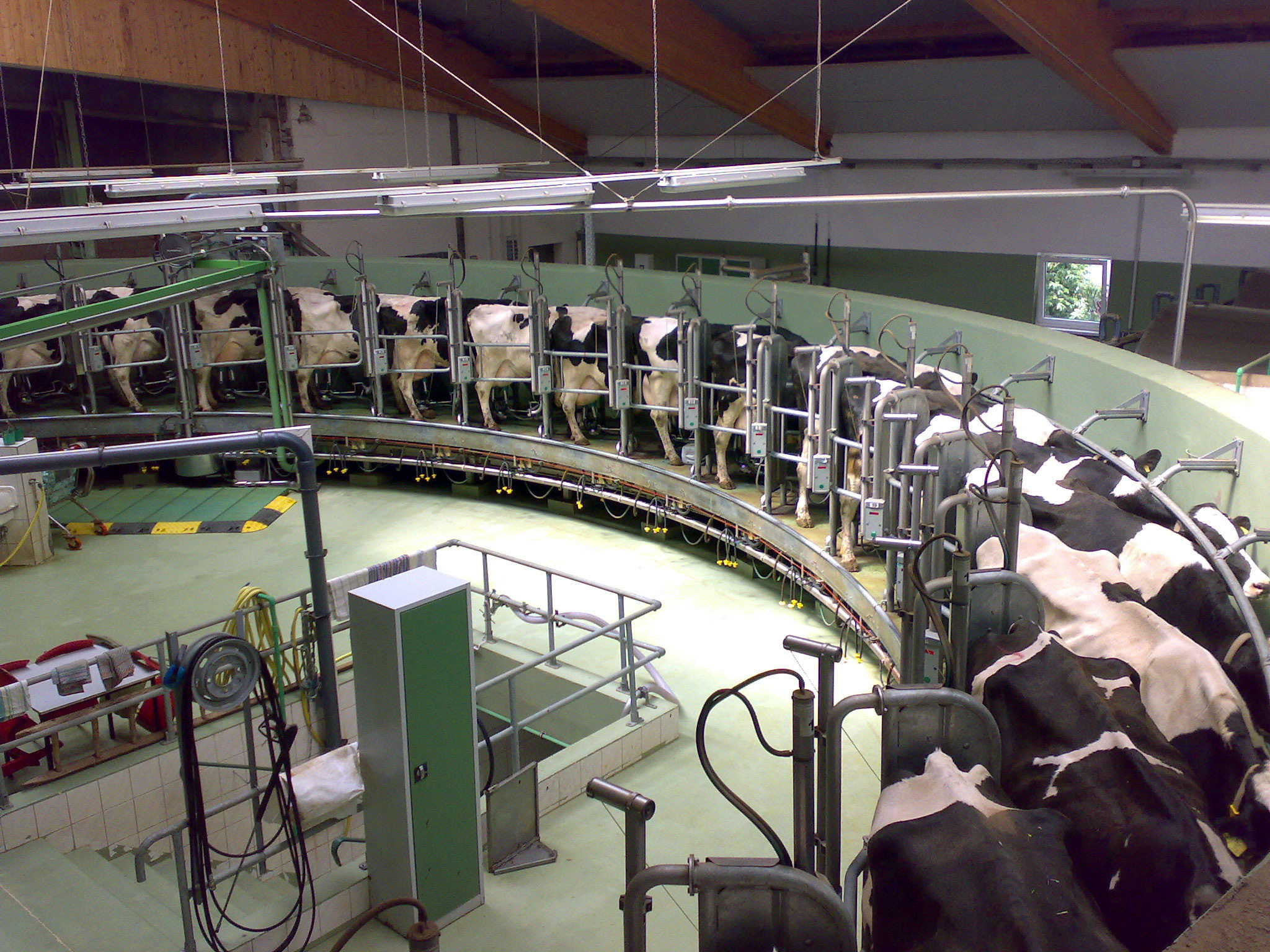 The plight of milk producers supplying the dairy cooperative Arla in Denmark and Sweden was the lead article in my Danish newspaper yesterday morning. Interviews with a number of farmers supplying Arla highlighted their loss-making situation at current milk prices. The journalist writing the story highlighted that a number of factors were responsible for the current low milk prices: the Russian import ban on EU dairy products, lower import demand in China but also increased production in the EU which he attributed to the removal of milk quotas in April of this year.
That EU milk production has increased is clear, as shown in the figure below. Production has increased from 135.2 mt in 2008 to a forecast 149.4 mt in 2015 and an estimated 150.8 mt in 2016. More recent data from the Milk Market Observatory (MMO) Dashboard for 23 December 2015 even suggests that the expected increase in 2015 will be significantly higher at 1.8% rather than the 1.1% shown in the December 2015 short-term outlook. The pace of increase has been uneven. Production grew by 2% or more annually in 2010 and 2011, and by a bumper 4.7% in 2014, with relatively modest increases in other years.

This increase in production was associated with a gradual loosening of milk quotas. Following the Commission Communication on the Health Check and in anticipation of the final Health Check decisions, there was strong pressure in the Agriculture Council to increase production possibilities. As a result quotas were increased by 2% in April 2008. To ensure a ‘soft landing’ and to gradually erode the value of quotas to close to zero by 1 April 2015 when quotas were due to expire, quotas were increased by 1% each year from 2009/10 until 2013/14, with an additional measure (fat correction reduction) which further increased production potential.
However, the journalist’s comment set me thinking about how important quota removal has been to the increase in EU milk production over the past 12 months relative to other factors. There was no increase in quotas in 2014/15 compared to 2013/14 until quotas were removed on 1 April 2015 (although some countries could increase their quota for milk deliveries by switching quota from direct sales). At the same time, milk prices reached record-high levels in 2014 (see figure below), despite the steady expansion of quotas since 2008. Any price-depressing effect from increased EU production was more than compensated by the positive price signals coming from a rapid growth in world market demand. 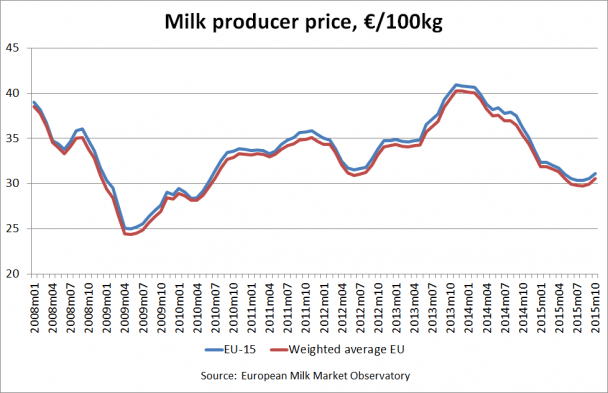 Milk prices are an important incentive to alter production. After very buoyant milk prices in 2008, prices collapsed to around 25c/l in the middle of 2009 but recovered to a level between 34-35c/l from August 2011 to July 2013. Prices then soared to reach a peak of over 40c/l in the four months from November 2013 to February 2014, before dropping again to their current level of around 30c/l.
In looking at the incentive to increase milk production, milk prices are only part of the picture. What really counts is the evolution of the milk margin which also takes into account trends in input costs. I previously looked at changes in milk margins in the EU using MMO data in this post, emphasising the great variability across farms in the EU around the EU average. The next graphic shows that, indeed, input costs grew in line with the increase in milk prices between 2009 and 2013 for the EU as a whole but input prices fell in 2014. Thus, the incentives at the beginning of 2014 to increase milk production were boosted by the fall in input costs in that year. 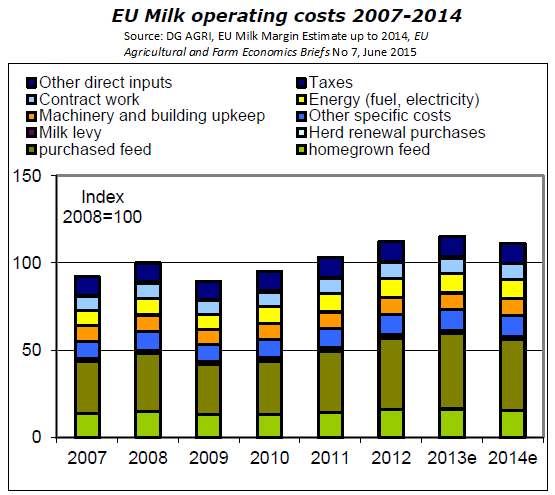 The trend in incentives is even clearer in the next graphic. This shows the quarterly evolution of average milk prices, operating costs and milk gross margin in the EU from Q3 in 2013 to Q3 in 2015. Input costs turned down about three Quarters before milk prices did, so during those three Quarters, covering in particular the peak production period in the first half of 2014, the incentive to produce additional milk was even greater than indicated by the milk price alone. It should thus be no surprise that milk production soared by an estimated 4.7% in 2014. 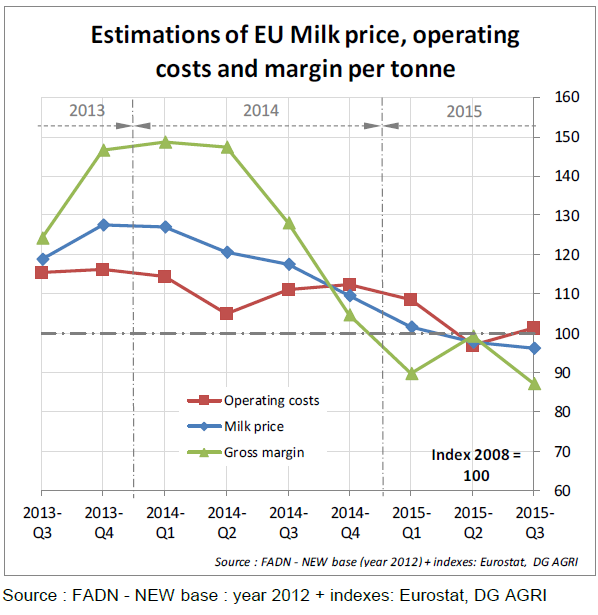 The question is whether it is possible to disentangle the respective contributions of quota removal and the carryover effect of the high 2014 milk prices and margins to the expected 1.8% increase in milk deliveries in 2015.
Distinguishing developments in countries constrained and not constrained by quotas
One way to answer this question is to make use of the fact that quotas were not binding in all member states, and to examine separately the evolution of milk production in countries that were constrained and those that were not constrained by quotas. I would expect production to be more sensitive to changes in milk prices/margins in the non-constrained countries during the quota period, but what I am really interested in is whether there is evidence that milk production has increased faster in the quota-constrained countries in the seven months for which data exists since quotas were eliminated.
To perform this test, we need to divide member states into the two groups of quota-constrained and non-constrained countries. Two issues arise in doing this. The first is that the countries where quotas were binding have changed over time. For example, in the last quota year 2014/15 twelve countries were constrained by their quotas, whereas in 2012/13 only five member states were constrained (where constrained is defined as production equal to or greater than a country’s quota ceiling). I decided arbitrarily to assume that countries which exceeded their quotas in three of the last four quota years belonged to the ‘quota-constrained’ group where you might expect to see a greater potential for expansion compared to countries in the non-constrained group. Eight countries fell into this group: Denmark, Germany, Ireland, Cyprus, Luxembourg, Netherlands, Austria and Poland. Four other countries – Belgium, Estonia, Italy and Spain – were above quota in the final year but not before.
The second caveat is the assumption that countries that did not exceed their national quotas were not quota-constrained. In some cases, such as Belgium, it may be that they did not exceed their quota because of careful management by farmers to remain within their quota ceilings. However, most countries below quota were well below quota. For example, in the final quota year, there were 16 member states under quota, and 10 of these were more than 10% below their quota for deliveries. Also, even in those countries where the national quota was not exceeded, it is possible that individual farms were constrained by their farm-level quota, depending on the national arrangements for the transfer of quotas and for offsetting over-quota milk with under-quota deliveries between individual farms. Again the fact that the majority of countries where the quota was not binding were well below their quota ceilings suggests that this should not be a major concern.
The result of this comparison is shown in the following diagram. Each month shows the 12-month milk deliveries for the 12 months ending in that month. Thus, the two data points for 2012M12 show total milk production in the calendar year 2012 for both groups of countries. 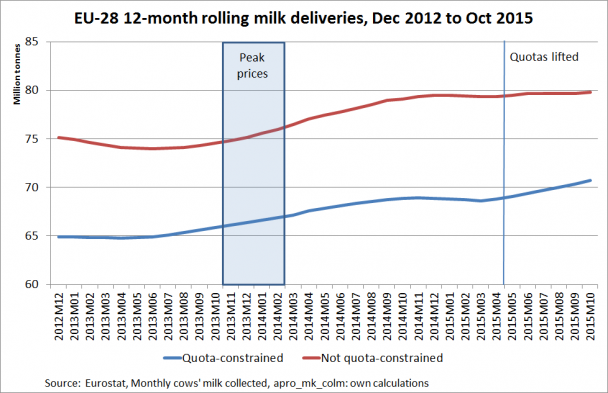 A number of factors have come together to result in the collapse of the EU milk producer price from 40c/l in the early months of 2014 to 30c/l today. The main factors are external to the EU, such as the Russian import ban, slow growth in Chinese import demand and increased production in significant producers such as the US. But milk production has also grown in the EU in 2015, by 1.8% according to the latest MMO estimate.
It is plausible to point to the elimination of milk quotas in April of this year as the reason for the growth in EU milk production in 2015. Indeed, we find some evidence that production has increased much more significantly in the seven months since quotas were eliminated in those countries that were previously constrained by their quota ceilings compared to those countries where quotas were no longer binding.
However, we should also remember that quota elimination in 2015 followed a year of record prices and even more record margins in 2014 which led to the single largest year-on-year increase in EU milk deliveries even when quotas were still in place. During 2014 (comparing annual production in calendar year 2014 with calendar year 2013), milk deliveries increased by 5.8% in the non-constrained countries compared to 3.8% in the quota-constrained countries. The size of the increase in constrained countries is particularly noteworthy given that quotas themselves did not increase in 2014/15 compared to the previous year. As we know, many producers decided to build up their production capacity risking the record-breaking superlevy fines that year in anticipation of the end of quotas in April 2015.
The separate effects of quota elimination and the carryover effect of high prices and margins in 2014 on EU milk production growth in 2015 thus cannot be disentangled. It is safe to conclude that the impact of either one on milk production growth in 2015 would not have been anywhere near as large without the other.
This post was written by Alan Matthews.
Photo credit: Wikipedia

3 Replies to “Is the removal of quotas responsible for the increase in EU milk production in 2015?”