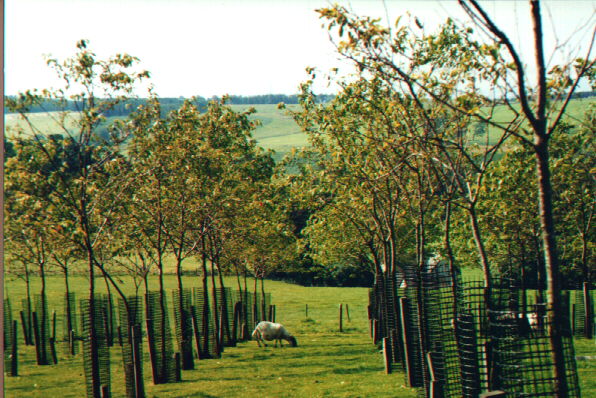 More than 80 policy makers, farmer’s representatives, NGOs and scientists got together on Wednesday this week in the European Parliament in Brussels to discuss the potential agroforestry holds for the future CAP. The event, entitled “Agroforestry: Trees for a Sustainable European Agriculture”, was organised and chaired by MEP Gaston Franco with the aim of promoting and supporting agroforestry at the European level. The programme (see agenda and presentations here) has brought together many speakers with various backgrounds and perspectives, resulting in a demonstration of a diverse and sophisticated picture of the field.
Agroforestry combines production and environmental protection in an innovative way, said Alain Canet – President of the French Agroforestry Association. It allows optimising the use of natural resources and produces biomass and biodiversity as well as it “offers innovative solutions to modern challenges of rural development,” argued Christian Dupraz, Researcher and President of the European Agroforestry Federation (EURAF). He stressed that it’s not a mix of production systems but a new approach contributing significantly to, inter alia, the fight against climate change, soil erosion, biodiversity preservation, resilience to stormy events and fire hazards. Addressing critiques on its profitability, Mr. Dupraz emphasised that the new system can make money to farmers in the long run and underpinned this argument by agroforestry’s Land Equivalent Ratio of 1.2-1.6, meaning that even 60% more can be produced this way than by monoculture in the same area.
Maria Angeles Benitez Salas, Director in DG Agriculture voiced strong support for agroforestry as a re-discovered area in agriculture. She emphasised that public goods provision and profitability should go together in the long run and thereby agroforestry has the potential to create a win-win situation in the long run. She also added that future success requires taking action on training through the exchange of best practices and research under the ‘multi-actor approach’.
However, Stephen Briggs, farmer in Cambridgeshire, identified some policy challenges that ‘climate smart’ agroforestry generates. This new system might cause problems in long term land tenancy, taking the slow process of growing trees into account, and it may also raise financing and priority concerns (it is unclear, for instance, whether supporting agroforestry pertains to the scope of the first or the second pillar). It would also be necessary to provide the eligibility of plots for CAP direct payments with more flexibility, respecting the diversity of agricultural systems. This view was also shared by Antonia Andugar (Senior Policy Advisor to COPA-COGECA), stressing the heterogeneity of geography in Europe and emphasising that agroforestry has the potential to reduce land abandonment by keeping farmers inside agriculture.
Dominique Chalumeaux – farmer, in charge of forest and agroforestry issues at the French Agricultural Chambers Assembly -, found raising programme uptake level is one of the biggest challenges in the future of agroforestry. Personalized and technical support given to farmers on the spot is key, he said, and raised several concrete examples of success in the field to underpin his argument. Jana Polaková, Senior Policy Analyst at IEEP went further and argued that even defining agroforestry holds challenges for policymakers. She emphasised the importance of improved farm advisory services as well as of revised agroforestry and cross-compliance measures. Those further interested in the background of the topic might read the report, commissioned by the EC, written by a team led by her.
On the whole, it seems that agroforestry has a great potential to change our way of thinking about agricultural production systems and now it is the excellent time to bring this issue to the heart of the discussion on the CAP reform. This new idea might play a major role in the future negotiations on greening and may even redeem greening requirements.