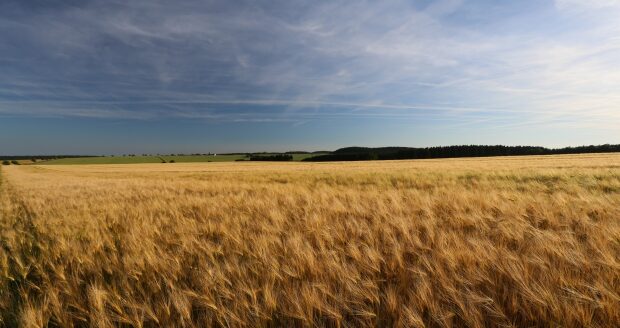 Since 2007/08, the world has lived with substantially higher, if fluctuating, prices for grains following the global food price spike that began in 2007. Economists would predict that higher prices would lead to a global supply response. Indeed, global cereals production has increased by over 500 million tonnes in 2013 compared to 2006 production of just over 2 billion tonnes (FAOSTAT statistics are used throughout this post, and cereals production is measured inclusive of the volume of milled rice). This corresponds to an increase of 25% over this period, or a compound annual growth rate of 3.3% per annum which is impressive.
What is also of interest is where this supply response has taken place. Immediately after the food price shock it seemed that most of the supply response was taking place in developed countries, with only a limited supply response in developing countries. Various reasons were suggested for this. It was argued that there was limited transmission of the international price increases to domestic markets in developing countries, either because of high transactions costs (inefficient transport systems, expensive customs procedures) or because of deliberate government policies (reducing import tariffs or imposing export restrictions in order to limit the extent of price increases on domestic markets).
A further reason suggested for this limited supply response was that developing country farmers had only limited access to the additional inputs (particularly fertiliser but also water and capital for investment) necessary to increase production. It was also pointed out that oil prices, and thus fertiliser prices, increased at the same time as food prices on international markets, thus dampening the supply response we might otherwise expect from increased food prices alone.
However, the differential supply response in 2007 in favour of developed countries has not been maintained, as can be seen in the chart below. Each of the bars in the chart below represents the additional production in each year compared to 2006. After an initial hesitant start, cereals production in developing countries has steadily increased, and especially since 2011. 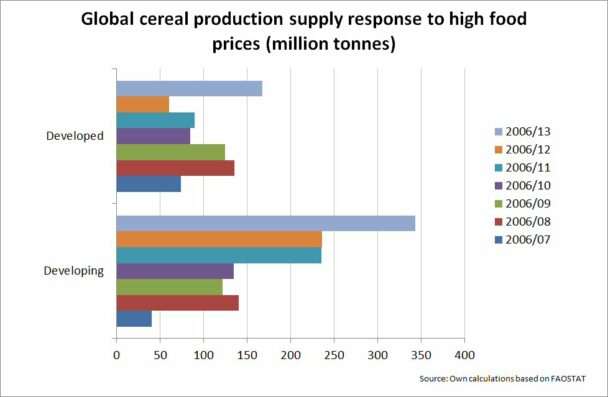 On the other hand, the supply response in developed countries appears to have faded in later years (although poor weather conditions in 2012 were partly to blame). It was only due to the bumper 2013 harvest, boosted by a record-breaking maize harvest in the US and a good EU crop despite mixed weather conditions during the year, that the contribution of developed countries to the increase in global cereals production since 2006 has rebounded. (Developed countries are defined as North America, the EU27, Norway, Switzerland, Israel, Japan, Australia and New Zealand).
Presenting the growth figures in absolute terms is somewhat flattering to developing countries because they account for about two-thirds of global production. The table below reproduces the same data, but this time expressed as percentage changes from the 2006 base year. The steady momentum building behind the production increases in developing countries, compared to the flat-lining of production in developed countries until 2013, also emerges clearly from these figures. In 2013, the production growth in both regions relative to 2006 was virtually the same. (Note that the focus here is on cereals production regardless of end use, so whether the cereals are used for food or fuel is not taken into account).

It might be the case that the main beneficiaries of higher global cereal prices among developing countries were the more competitive, export-oriented countries such as Brazil, Argentina, Indonesia, Thailand and China. However, after a poor start in 2007 when cereals production actually fell, cereals production in Africa (including both North Africa as well as South Africa) has also responded strongly and the 2013 figure is not too far behind that for all developing countries and the world as a whole.
EU supply response to higher prices

Of particular interest has been the cereals production performance of the EU. Despite much higher market prices (the OECD reports that the EU farmgate producer price jumped from €117/tonne in 2006 to €184/tonne in 2007) EU cereals production fell in that year.. There was a very significant jump in 2008, partly due to an area increase due to the suspension of set-aside in that year but also due to good weather. EU cereals production has not managed to exceed the 2008 figure since then.
The EU performance is put in perspective by comparing it with the trend in world production in the following chart. EU production (in blue) is obviously much more volatile than world production but the trend over the quarter-century from 1980 to 2006 is virtually the same (the red linear trendline is calculated using EU production data from 1980 to 2006). However, a clear divergence emerges in the years after 2006. EU production continues along its trend (despite the elimination of set-aside in 2008), while there is a clear upward shift in the trend rate of growth in global cereal production in response to higher prices. 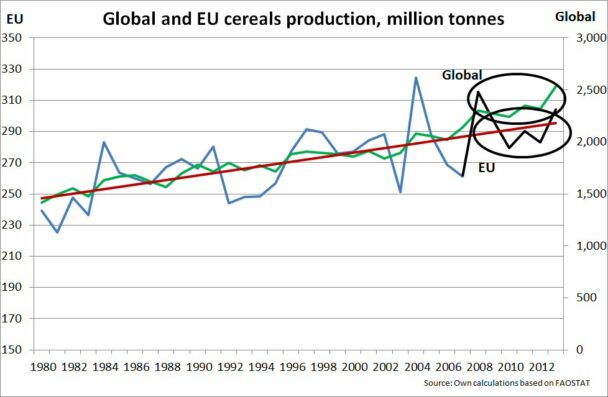 Just why the EU cereals supply response to higher prices has been much poorer than the rest of the world is an important question with implications for policy. EU cereal yields are already very high, and it may be simply a case that incremental gains are more difficult in the EU. Indeed, there is evidence that yields for some cereal crops (wheat) are beginning to plateau in some EU member states. However, UK analysis shows continued genetic gain in research plots, with the implication that agronomic practices may be partly responsible. Area expansion under cereals may also be easier in other parts of the world (in Europe, cereals area is implicitly constrained by the requirement that the area under permanent pasture (now permanent grassland) must be maintained, but this appears to have been a binding constraint only in a couple of member states to date).
Environmental factors play an important role in EU agriculture, though their impact can be argued either way. Environmental NGOs, for example, argue that the poor yield response is due to continued long-term decline in the soil organic matter content of arable soils and to poor crop rotation practices. Farm organisations, on the other hand, complain that the lack of supply response is due to the increasing severity of environmental legislation (regulating, for example, not only the use of nitrogen but also an increasing number of plant chemical products). Opposition to the introduction of ecological focus areas as a requirement for the green payment under the CAP Pillar 1 also follows this line of thinking.
Longer-term factors responsible might include a reduction in production-oriented agricultural research and the hostile environment in the EU for plant biotech companies, both of which may have led to a reduction in the underlying rate of productivity growth. There is also some evidence that warming temperatures may be adversely affecting some cereal yields in some member states. While the response to higher prices is a movement along the cereals supply curve, the apparent production response may be masked if the outward shift in the supply curve due to productivity growth is slowing down at the same time. Update 21 February: This paper published yesterday from Stanford University attempts to quantify the role of climate change in stagnating European crop yields and concludes it can account for around 10% of the stagnation in wheat and barley yields.
The EU accounts for one-eighth (13%) of global cereals production. Given its importance in global food supply, it would seem important to gain a better understanding of why the EU’s supply response to higher world food prices has not matched that in Africa, let alone the rest of the world.
This post was written by Alan Matthews
Photo credit: Agri.eu

4 Replies to “Why the poor EU response to higher grain prices?”