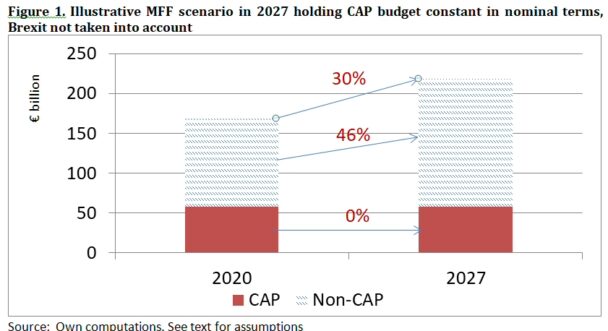 These assumptions allow non-CAP expenditure to grow by almost 50% (46%) over the seven year MFF period. Were this scenario to come about, the share of the CAP in the EU budget would fall from 34.7% in 2020 (the last year of the current MFF) to 26.7% in 2027 (assumed to be the last year of the next MFF). This would continue the steady decline in the CAP’s share of the EU budget since 2001.
I emphasise again the four key assumptions behind this analysis (i) that Member States agree to maintain the ratio of the EU budget to EU GNI at its 2020 level for the next MFF period; (ii) that the Commission proposal for the next MFF is based on an annual real growth rate of 1.8% and a nominal growth rate of 3.8%; (iii) that the CAP budget is held constant in nominal terms; (iv) and that no account is taken of Brexit. The next step is to identify the Brexit impact on these projections.
What is the scale of the Brexit budget gap?

The starting point is the size of the budget gap left when the UK net contribution is no longer paid into the EU budget after Brexit. Here we are concerned with the structural (long-term) impact of Brexit, and not the terms of the financial settlement to settle past liabilities that may be agreed with the UK as part of a withdrawal agreement under Article 50 TEU. The potential size of this funding gap in the future is uncertain, because of uncertainties over future economic growth rates in the UK (assuming it remained a part of the EU) and the future exchange rate between sterling and the euro.
Also, there is considerable volatility in the UK net contribution from year to year, as can be seen from the table below (this updates the table given in this earlier post taking account of the recent publication of the 2016 net operating balances of Member States by DG BUDGET). Taking an average of the three years 2014-2016 suggests that the UK’s net contribution is around €10.2 billion annually. This compares to EU budget expenditure excluding expenditure in the UK in 2016 of €129 billion, or a gap of 7.9%. This net contribution would be expected to grow over time with economic growth in the UK.
Another point to note in this table is the disparity between the UK’s contribution to EU GNI (17.0%) and its share of EU expenditure (5.7%) (see last column). This means that, when the UK leaves, there will be an increase in the share of EU-27 expenditure relative to the remaining EU-27 GNI, assuming expenditure is kept unchanged. Expenditure has to be reduced by the equivalent of €10.2 billion (in 2016 prices) if an increase in Member States’ gross contributions is to be avoided. But, according to Haas and Rubio, the reduction would have to be €16 billion (in 2016 prices) if the ‘political ceiling’ of an EU budget not greater than 1% of EU GNI in the EU-27 (rather than the EU-28) is not to be breached. This would represent a much more severe constraint on the growth in EU spending in the coming MFF period.

What will be the impact of the Brexit budget gap?

Figure 1 made the point that the combination of economic growth in the EU and holding the CAP budget constant in nominal terms would give a ‘room for growth’ for non-CAP spending in the EU MFF to address new challenges of around 46% by the end of the period. The departure of the UK would considerably reduce this ‘room for growth’.
To assess the Brexit impact, we make the simplifying assumption that the UK net contribution of €10.2 billion (in 2016 prices) would grow in line with the growth in EU GNI over the period 2016-2027 (assumed to be 3.8% p.a.). In practice, the growth in the UK net contribution if the UK remained a Member State would depend on the growth in the UK GNI, the growth in non-EU imports into the UK (which would impact on the customs union tariff revenue transferred to Brussels), the growth in EU expenditure in the UK, and the way the UK rebate would be affected by future EU expenditure growth.
Under this assumption, the UK net contribution in 2020 (in nominal prices) would increase to €11.8 billion. Over the period to 2027, it would increase to a further €15.4 billion. Cumulating these net contributions (in nominal prices) over the full MFF period would amount to €96.5 billion. This amounts to exactly half of the anticipated ‘room for growth’ in non-CAP spending over this period of €195 billion. Thus Brexit, in one swoop, results in the disappearance of half of the expected ‘room for growth’ in non-CAP spending over the period 2021-2027.
If, in addition, the remaining EU-27 Member States agreed (presumably under pressure from the remaining net contributors) that the ‘political ceiling’ for the EU budget of 1% of the GNI of the remaining EU-27 Member States should be maintained, the ‘room for growth’ in non-CAP spending would fall by even more. The required €16 billion reduction in expenditure in 2016 (in 2016 prices) would be €18.6 billion in 2020 and this reduction would amount to €24.1 billion in expenditure in 2027. Cumulating the required reductions over the period 2021-2027 amounts to €151.4 billion, or nearly 80% of the projected ‘room for growth’ in non-CAP spending in the absence of Brexit.
In that scenario, it is hardly conceivable that the EU’s new political priorities for the coming period, including security and migration as well as growth, could be financed from the ‘room for growth’ made available by holding CAP spending constant in nominal terms. The likelihood of a cut in the absolute size of the CAP budget even in nominal terms would be overwhelming.
These are scenarios, not forecasts. They illustrate the likely impact of decisions that have yet to be taken. Key variables will be the Commission’s assumptions regarding future EU-27 growth when drawing up its MFF proposal, but even more whether the remaining net contributor Member States will be prepared to lift the ‘political ceiling’ on the size of the EU budget and by how much. This will only become clear when the MFF negotiations get under way.
This post was written by Alan Matthews