As Valentin’s blog post yesterday explains, the CAP is not only a European agriculture policy, it’s a European income redistribution policy. The centrepiece of the CAP is the €42 billion a year in ‘direct aids’ or income support to farmers, funded entirely from the pooled EU budget. Valentin points out that in an era of fiscal austerity, the idea of billions of euros moving from one country’s taxpayers to another country’s farmers is likely to be politically controversial. Particularly when the biggest payouts go to Europe’s wealthiest citizens and most profitable companies.

As national governments decide by how much they are going to pay of nurses and school teachers, how many university places they will cut and which taxes they are going to have to increase, the idea that aids to farmers are ringfenced from cuts will come as a surprise to many. But this is exactly what European leaders agreed to in 2002, in a deal devised by Jacques Chirac and Gerhard Schroeder that fixed the CAP’s direct aids budget at a constant level until the end of 2013.

The result is that the German Chancellor Angela Merkel remains committed to the deal agreed by her predecessor, in which Germany will this year put €2.4 billion more into the CAP direct aids budget than it will get out, while Greece will get €1.2 billion more than it puts in. France will remain a net beneficiary although its gains this year of €868 million are set to halve by 2013 to €409 million.

When the protection of the CAP direct aids budget does finally expire, it seems certain that something will have to be put in its place. As the CAP2020 blog reports, a new study on subsidies and farm viability finds that in the absence of subsidies 83% of farms would continue to have a positive farm income but only 18% have a positive farm income once the costs of their own labour and assets are taken into account. Previous studies have suggested that the major impact of removing direct aids is that farm asset values will fall, especially land values. From the point of view of the general public there is no harm in lower land prices, though a young farmer who has taken out a hefty bank loan to buy land or an older farmer who plans to sell his land to provide for a retirement income would be entitled to think otherwise. It doesn’t take a genius to see that the upheavals – political and economical – of an overnight abolition of the current €42 billion a year that goes into the pockets of Europe’s farmers would be such that this is a very unlikely scenario.

There is no shortage of studies pointing failings of the current system of direct aids. Two of the best are the study by Jorge Nuñez Ferrer for the European Parliament and a short paper by the academics David Harvey and Attila Jambor. An excellent new report commissioned by European Parliament looks beyond the problems of current direct aids and considers how they might be replaced by a system that is politically viable but economically rational. A hard task, you might say. The study’s lead authors are Jean-Christophe Bureau, an occasional contributor to this blog, and Heinz-Peter Witzke. I was invited in an informal advisory role along with capreform.eu blogger Alan Matthews and a handful of others.

The report is among the best contributions to the debate on the future of the CAP. It contains a very useful overview of how the various member states line up on key issues and also surveys the various proposals tabled by farm unions and environmental and other civil society organisations. As far as conclusions go, the authors back the ‘public money for public goods’ mantra that was endorsed in a joint statement by Birdlife International and the European Landowners Organisation. 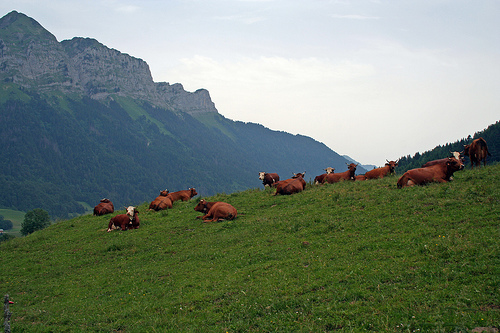 Bureau and Witzke argue there needs to be a gradual transition away from the current distribution of direct aids to one which more accurately reflects the contribution of different farm types towards a variety of public goods. A flat rate per hectare income support payment would remain but should be co-financed, the authors argue, and payment limits should be introduced to very large farms, according to the number of people employed. Member states would be free to shift money from income support into public goods-type schemes. The effect of the proposed system would be considerable redistribution among current winners and losers with the general theme being more support for extensive farming systems, generally to be found in upland regions such as the alpine pasture pictured (above, right).

You can read the 167 page report in full here.