DG AGRI’s Milk Market Observatory (MMO) is now proving its worth as a source of up-to-date data on milk and dairy product market developments. It is also an excellent source for historical time-series statistics which allow us to see patterns in the data and to develop hypotheses about the behaviour of actors in the food chain.
The chart below taken from the MMO shows the evolution of two indicators of producer prices for raw milk. One is the weighted average price that EU farmers received for raw milk at real fat and protein content (the ‘producer price’). The other is a hypothetical price, the farmgate milk price equivalent (FMPE), which is the price processors would be expected to pay based on the going market prices for butter and skimmed milk powder after deducting an average processing cost.
The producer price a farmer receives may be different from this hypothetical FMPE because of differences in actual fat and protein content from that assumed in the FMPE calculation, because actual processing costs may differ from those assumed in the calculation, and because much milk production is transformed into other types of dairy products which may have higher or lower value in the market place. These differences would explain differences in the level of these two price series over time. However, what I want to focus on in this post are the cyclical patterns in the two series and their significance. 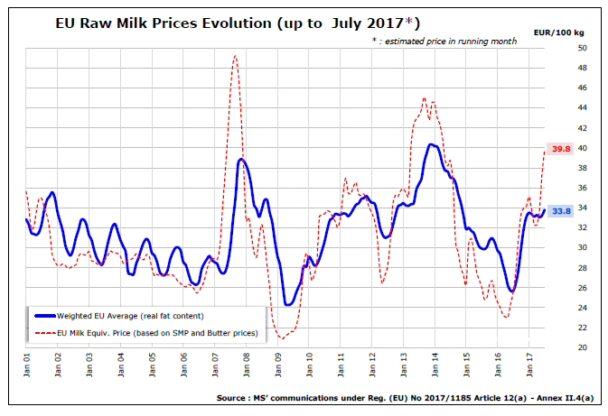