EU agricultural real income per worker has increased by 6.7% in 2011 compared to 2010 levels, according to initial estimates issued by Eurostat in 20 December 2011. This increase results from a rise in real agricultural income (+3.9%), due to higher commodity prices, together with a decline in the number of farm workers (-2.7%). Therefore it seems that the economic & food crisis together was beneficial for farm incomes in 2011. The first estimates also reveal that between 2005 and 2011, EU27 real agricultural income per worker have also increased (+18.3%), while agricultural labour input has fallen (-15.2%). Thereby it seems there is something like a longer trend here, underpinned by detailed country level data. 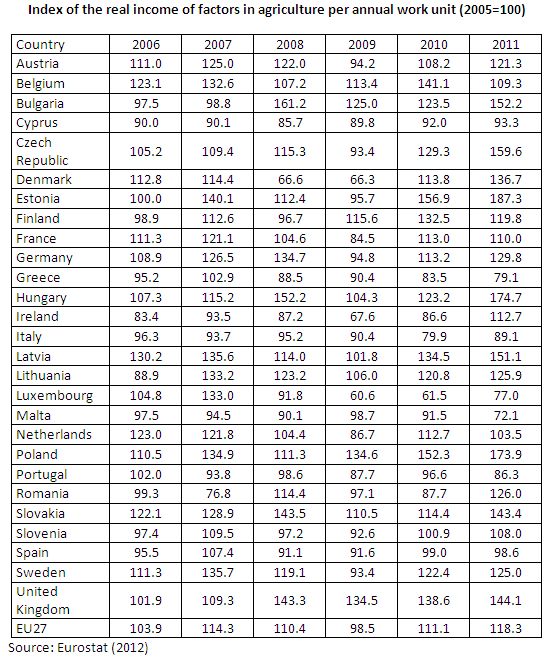 Without going very much into detail, it is apparent from the table that agricultural income has been increasing in each and every year in the majority of the cases. Except 2009, the peak of the economic crisis, agricultural real income per worker was higher in all years analysed than in 2005 in most EU-27 countries.

This seems to be good news for farmers but bad news for policy makers if we consider that one of the key arguments for continuous income support of the European Commission is actually the fall of agricultural incomes. In November 2010, the EC clearly stated in its Official Communication that (p.6):

“After a decade of mere income stagnation, agricultural income dropped substantially in 2009 adding to an already fragile situation of an agricultural income significantly lower (by an estimated 40% per working unit) than that in the rest of the economy, and income per inhabitant in rural areas is considerably lower (by about 50%) than in urban areas”.

Although a year later (in 12 October 2011), the EC agreed that agricultural incomes have been increasing, the Impact Assessment says that (p.17):

“Even if the average agricultural income per worker is estimated to have increased by 12% in 2010, this increase followed two years of sharp decline so that the recovery of 2010 has not been sufficient to bring it back to the 2007 level.”

A similar reasoning can be found in the second page of the Explanatory Memorandum of the “reform package”:

“The pressure on agricultural income is expected to continue as farmers are facing more risks, a slowdown in productivity and a margin squeeze due to rising input prices; there is therefore a need to maintain income support and to reinforce instruments to better manage risks and respond to crisis situations”.

So it seems that we have two EC arguments here. The first is that agricultural incomes are decreasing, which is clearly false as discussed above. Nevertheless, the EC seems to neglect this fact and always finds a reason for continued income support.

The second argument here refers to the significantly lower agricultural incomes compared to the rest of the economy. Although EC figures usually support this fact, the devil, as always, lies in detail. For those familiar with agricultural income statistics, it is apparent that conceptual differences exist between the measurement of farmers’ income from agricultural activities and average wages in the economy by member state. It is also clear that the lack of reliable data on full-time equivalent statistics for the total economy results in selecting just a small number of countries to calculate EU15 and EU10 averages, thereby seriously distorting results.

According to a recent research on the topic, average farm household income is greater than the average non-farm household income, contrary to EC data and figures. This also seems to be the case in the U.S. where the median total farm household income exceeded the median U.S. household income in every year from 2000 to 2010, according to recent ERS data. In other words, as concluded by a previous OECD report, there is no evidence that farm households in industrialised OECD countries have systematically lower incomes than other households, so policies to support incomes across the whole sector are unnecessary. If we also take into account OECD-FAO long term provisions for rising agricultural prices and incomes, we might start to really re-think this issue in the long run – an activity I would suggest EC officers to do as well.