Today, the European Commission has launched the CAP@50 communication campaign to mark the fiftieth anniversary of the Common Agricultural Policy.

The Commission’s campaign wants to emphasise the CAP as a cornerstone of European integration, as a policy that has provided European citizens with half a century of food security and a living countryside. The year-long communication campaign includes an interactive website, an itinerant exhibition, audio-visual and printed materials, as well as a series of events in Brussels and the Member States.

No one wants to spoil a good party, but of course the overall balance sheet of the CAP remains controversial, to say the least.

Yes, the CAP helped to stabilise farm prices for EU farmers over the past 50 years and by reducing risk it encouraged farmers to make the investments which contributed to the modernisation of European agriculture over that period. Yes, the CAP resulted in a transfer of income to farmers which helped to smooth the huge rural to urban migration and adjustment that characterised European society in the 1960s and 1970s. And yes, more recently, the CAP has begun to take responsibility for paying farmers for the public goods which are otherwise neglected in production-oriented agriculture.

But these benefits were bought at a very high price. The high protection provided to European agricultural production prevented resources from moving into more productive sectors. It distorted the global trading system to the detriment of developing countries. It led to a costly and inefficient transfer of resources from, often, relatively poor consuming households to much more wealthy farmers.

It pushed up asset prices (especially land) in agriculture and inhibited structural change and the emergence of a more competitive agricultural sector. It contributed little to overall food security in Europe, not only because raising food prices is about the worst way I can think of to try to improve a poor household’s food security, but also because the main impetus to increased production came from the flow of innovations from the chemical, plant breeding and animal genetics industries rather than market regulation per se.

It was not that the objectives were wrong, but rather the instruments used to achieve them. This was eventually recognised in the early 1990s with the MacSharry reform, and since then there has been halting progress towards a more efficient and targeted agricultural policy. The extent of this progress, and the distance of the road yet to be travelled, was excellently documented in this OECD report last year.

For those wishing to review the past fifty years of the CAP, there are some excellent monographs, such as Michael Tracy’s Government and Agriculture in Western Europe and Michael Cardwell’s The European Model of Agriculture.

However, for a quick overview of the main trends in CAP support, Tim Josling’s account of agricultural subsidies in Western Europe over the past fifty years is a good starting point. To whet the appetite, I reproduce below one of the graphs in that paper, showing the Nominal Rate of Assistance (NRA) to EU agriculture over the period from 1956 to 2007.

The graph distinguishes between the NRA to exportables (products in which the EU was competitive on world markets, and where the NRA was close to zero for most of the time) and importables (where protection was much, much higher) as well as giving the overall average. It tells the story in a single picture of a highly distorting policy which, over time, has gradually been reformed. 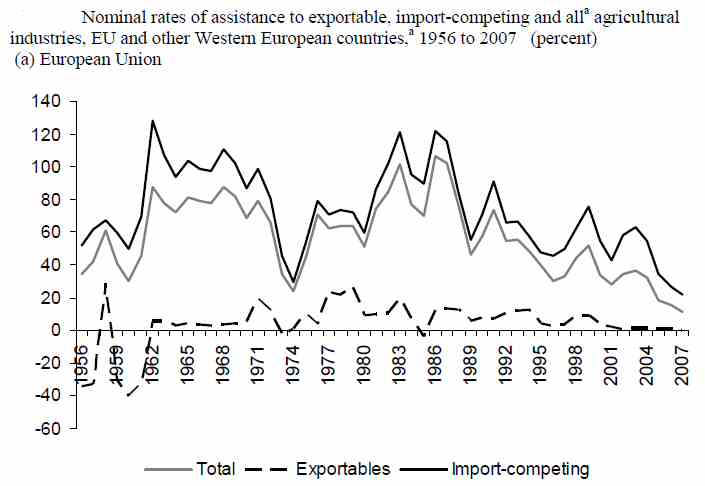 (Josling and Kym Anderson drew on this paper in their own commemoration of the CAP at fifty written five years ago marking the signing of the Treaty of Rome, and it is still worth reading even if they were a little quick off the mark).

European agricultural policy now faces a major challenge in helping to steer the farming industry through the conflicting objectives of producing more food while reducing its resource footprint and protecting environmental assets and biodiversity. As we commemorate the CAP at fifty, we must strive to ensure that, in the next fifty years, the instruments used are better adapted to the objectives to be achieved than was the case in the past.