The Russian ban on the import of certain food products from the EU (and some other countries) has led to a chorus of appeals from member states and from farm groups for aid and compensation. The Russian ban has created an immediate problem in the fruit and vegetables sector, where the summer harvest for fruits is in full swing, there is a high dependence on the Russian market, and the produce is perishable with few immediate alternative outlets. But the overall scale of the problem needs to be kept in perspective. In this post, I present the data on the countries and products affected.
To date, the response of the Commissioner and the Commission has been measured and appropriate. In his first statement on the day after the ban came into force, the Agriculture Commissioner acknowledged the concerns of farmers, requested a potential impact analysis from his officials, and called a management committee meeting which took place yesterday.
The statement following the management committee meeting acknowledged the potential market disruption for perishable fruit and vegetable products. The Commissioner has promised to come forward with appropriate new measures at the beginning of next week making use of his powers under Article 219 “Measures against market disturbance” of the new single CMO Regulation. Further measures targeting animal products are being considered. The meeting also recognised the need for faster and better access to market data, sector by sector, and put in place a reinforced market monitoring mechanism to which all member states will contribute.
The Russian announcement

On August 6, 2014, Russian President Putin signed Edict No. 560 “On Application of Certain Special Economic Measures to Assure Security of the Russian Federation”. Edict No. 560 prohibits or limits the importation, for a period of one year, of agricultural products, raw materials, and food that originate in a country that has imposed sanctions against Russian entities or individuals. It instructed the Russian Government to develop a list of the specific types of products subject to the import ban.
Following the Edict No. 560, the Russian Government on August 7, 2014 issued Decree No. 778 “On the Measures Implementing Edict of the President of the Russian Federation of August 6, 2014 No. 560”. Decree No. 778 specifies the countries whose products are subject to the import ban as well as the specific types of banned products. Among the banned products are meats, seafood and fish, milk and milk products, fruits and vegetables, and sausages. The targeted jurisdictions are the member states of the European Union, the United States, Australia, Canada and Norway (thanks to Lexology for these references). A copy of the decree with the specific HS tariff codes of the affected products can be downloaded here. Update 22 August 2014. The Russian Government slightly revised its list of prohibited imports on 20 August, here is the revised list of HS tariff codes. (h/t LEI).
Value of trade affected

The Russian market is the second most important market for EU agri-food exports after the US, with an export share of 10% which has remained unchanged since 2009. The total value of EU agri-food exports to Russia in 2013 amounted to €12 billion. The following graph (taken from the DG AGRI publication MAP-Monitoring Agri-Trade Policy publication Agricultural trade in 2013: EU gains in commodity exports shows the composition of these exports. 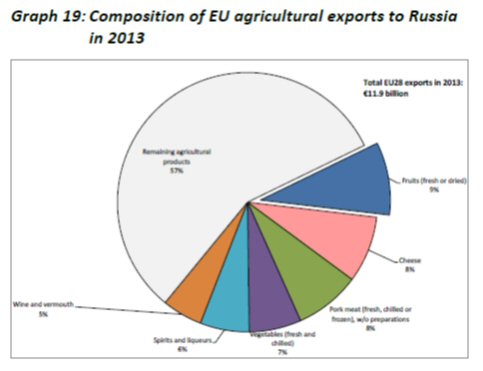 The Russian embargo does not affect all food products, but only a number of meats, vegetables, fruits, dairy products and fish. Notably, wines and spirits were not included. The embargoed products were valued at €5.2 billion and made up around 45% of the value of total exports to Russia in 2013. We should also remember that Russia banned EU pork imports at the start of the year as the Ukraine crisis escalated, valued at around €1 billion, just as it had also banned Polish exports of fruits and vegetables on so-called health grounds, so the marginal impact of the latest embargo is smaller than the headline figure suggests.
The breakdown of the embargoed products and the relative importance of the Russian market is shown in the following table. Dairy products (mainly cheese), meats and fruits are the main affected sectors, with smaller amounts of vegetables, prepared foods (including sausages) and fish. The Russian market is particularly important for fruits, followed by vegetables. Nearly one-third of all fruits exported out of the EU last year were destined for Russia. From the more detailed analysis of the dairy sector (the link to the English-language powerpoint presentation is at the bottom of the Spanish article) circulated at the management committee meeting in Brussels yesterday, around one-third of extra-EU cheese exports were also exported to Russia last year. So these are clearly the vulnerable sectors.

Individual EU countries also have very different exposures to the Russian market, with the Baltic countries, Finland and Poland particularly affected. The next table shows the importance of the embargoed products in the exports of each EU country in 2013, ordered by the absolute importance of exports. Although exports from Germany, Netherlands, Denmark and Spain are important in absolute terms, their dependence on the Russian market is much less than the countries mentioned and even Austria, Cyprus and Greece. Update 20 August 2014. Klass Osinga pointed out on Twitter that these figures may be distorted by indirect exports with transhipment through neighbouring countries. This would affect the distribution of exports by country of origin but not the overall total. Update 22 August 2014. See also the comment by Krijn Poppe in the comments section and the link to the LEI briefing on this topic.

However, from the perspective of exporters in these countries, a more realistic picture of the challenge of diverting exports destined to the Russian market is given by the share of Russia in each country’s total exports, including to the rest of the EU. This perspective emphasises the special position of the Baltic countries and Finland. For other EU countries, including Spain and Austria which have made loud calls for compensation, the Russian market for the embargoed products at 2-3% of their total exports is relatively unimportant.
It is important to point out that losing export sales does not represent a cost per se. Agra Europe in an editorial, for example, suggested that around €5 billion will be wiped off the EU’s agricultural export income in the coming year, based on the gross value of export sales of embargoed products to the Russian market. But a loss of sales in one market can be compensated for by higher sales in another. The Commission’s initial response rightly emphasised the importance of seeking alternative markets for the affected products. There have also been reports of EU exporters avoiding the sanctions by routing supplies through Belarus or Kazakhstan.
Of course, these alternative markets will not be as remunerative as the Russian market, so there will be a cost, equal to the difference between the expected sale price in Russia minus the actual sale price received (which may be zero if produce rots or is left in the fields) multiplied by the volume of lost sales. How large this cost may be, and whether it is within the normal amplitude of expected market fluctuations, is presumably what the Commission services together with member states will be monitoring in the weeks ahead.
In this context, there have been reports that the Commission is leaning on potential alternative exporters to the Russian market (Latin American countries, Turkey, Egypt) not to make up the gaps left by the embargoed EU supplies. This is driven by geo-political considerations, based on the assumption that higher food prices in Russia will make people disillusioned with Putin’s policies putting pressure on him to reverse them. While higher food prices have not yet materialised, Putin’s current sky-high popularity among the Russian population suggests this is a blunt instrument at best.
From the point of view of EU producers, it makes sense, at least in the short-run, to encourage these exporters to divert some of their supplies to the Russian market. This would help to lift world market prices and reduce the costs for EU exporters of finding alternative markets. If total Russian import demand simply shrinks, then the embargoed EU supplies must be sold on existing world markets, thus driving down prices not only for the displaced exports to Russia but also potentially for existing exports to third country markets.
If the value of existing exports to non-Russian markets is reduced because of this displacement effect, then this would be an additional loss to be added to the direct loss due to the lower prices received for the embargoed exports. However, while encouraging rival exporters to make up the shortfall in supplies on the Russian market is an attractive short-term strategy for EU producers, it does hold the risk that competitors gain a stronger foothold in that market from which it will be difficult to dislodge them when sanctions cease.
What the Commission can do

The EU has various instruments to manage market crises under the single CMO regulation. These include public intervention and private storage, increased export refunds, measures to stimulate consumption, direct aids and, in the case of fruit and vegetables (where export refunds are not an option), green harvesting and market withdrawals. Expenditure on these measures is met first from any margins remaining in the CAP budget. Once these are used up, the measures would be financed out of the new crisis reserve which has resources of around €425 million.
This crisis reserve has been created by reducing direct payments made to farmers at the end of last year, and if it was not used before the middle of October (corrected 23 Sept 2014), farmers would expect this money to be returned to them as part of the direct payments they will receive at the end of this year (provision is already made in the 2015 budget to reconstitute the crisis reserve by reducing 2015 direct payments, see this post). Depending on the nature and timing of the measures that the Commission will propose next week, the costs incurred for the rest of August and into the middle of October would be borne by the existing crisis reserve, thus reducing or even eliminating the pay-back that farmers would otherwise expect to receive. This mechanism will act as a brake on the rent-seeking tendencies of member states which will be aware that any compensation aid to the affected sectors will be paid by other farmers.
This post was written by Alan Matthews.

4 Replies to “Russian food sanctions against the EU”