The argument for flattening payments within a member state is that differences in the level of payments per hectare due to historical factors can no longer be justified, and that tying the value of entitlements to historical performance is unfair as between farmers themselves. However, the redistribution of payments among farmers is bound to give rise to political difficulties within a member state.

Reluctance to move to the regional model

DA, DE, FI and England adopted the dynamic hybrid model which is moving to a flat-rate payment over time (a flat-rate payment does not mean a uniform payment per hectare, as these countries make distinctions between different types of regions or land uses in their hybrid models).  SE, LU and Northern Ireland adopted a static hybrid, in which part of the payment is area-based and part linked to historical payments. But all other old member states continue to use the historical model.

In the Health Check,  member states were authorised to revise their original decision to opt for a particular model of implementation of the SPS. Member states that had chosen the historical model could either decide to narrow the gap between the unit values of payment entitlements or to change over to a (full or hybrid) regional model.  Member states which had introduced a static hybrid model could decide to reduce the historical component of the value of the payment entitlements and thus adjust them closer to the regional value.  Member states could also revise the composition of the regions. However, the Court of Auditors report on the SFP in 2011 noted that no  member state has yet decided to apply any of the options made available to them under the Health Check reforms and to revise the model chosen.

The distribution of payments per hectare in the old member states

The political and production implications of moving to the regional model for member states depend, in part, on the extent of the existing dispersion in the value of payments per hectare within a member state, or within regions of that member state. Most of the distributional data on the single payment is presented on the basis of payments per farm rather than payments per ha.

An exception was an analysis done by DG Agri for the Health Check drawing on FADN data for 2006. All countries had introduced the SPS by 2006, some countries making use of the possibility to delay its introduction by one year. There are some drawbacks in using FADN data to draw inferences on the distribution of payments within member states. FADN data cover “commercial” farms and thus it is likely that they account for a larger share of payments than of area. However, it appears to be the most recent data available on the distribution of payments per hectare at an EU-wide level.

In the table below, the direct payments considered refer to Pillar 1 payments (both coupled and decoupled) paid by the EU, thus excluding national aids paid to farmers. For each country, the median payment per ha (rather than the mean) is shown because this is a more appropriate parameter to use when analysing a distribution – 50% of farms have payments below the median, and 50% of farms have payments above it.

The measure of dispersion shown is the interquartile range, which is defined as the spread of the middle 50% of scores. When farms are arranged in ascending order of payment per hectare, it is the difference between the maximum payment received by farms in the lowest 25% and the minimum payment received by farms in the highest 25% of the distribution. The larger the interquartile range, the more dispersed is the distribution of payments and the more redistribution would follow from a move to the regional model.

This analysis assumes that these countries move to a uniform flat-rate payment across the country as a whole. In practice, these countries have implemented different models. For example, in the UK, the four devolved administrations have separate systems, and even England which was the only administration to opt for the dynamic hybrid model distinguishes between different types of regions. Germany also implements its dynamic hybrid model at the individual Land level and has introduced a separate grassland premium. 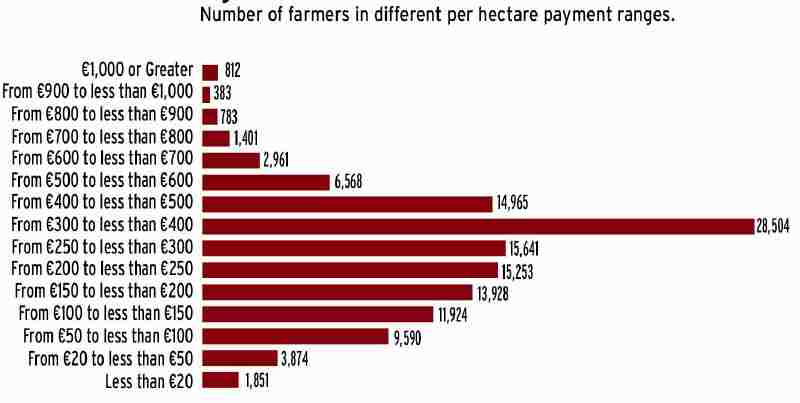 Given that in Ireland direct payments make up a substantial proportion of family farm income (72% on average in 2010 but up to 100% for particular systems such as cattle and sheep), such redistribution of direct payments would have immediate and dramatic effects also on the distribution of farm income. Apart from the political backlash, moving to a regional model would also likely redistribute payments from more productive to less productive farms, an important consideration given that growth in the agri-food sector is one of the few bright spots in an economy which yet again has entered recession in trying to address the results of the economic crisis.

The Irish government is appalled at the prospect, and is looking for greater flexibility in the Commisison’s proposals. Its ‘big idea’ is that the flattening of payments within member states should follow the same rhythm and use the same modalities as the Commission proposes for the convergence of payments across member states.

In other words, rather than the front-loaded flattening proposed by the Commission in which all member states would have to implement the regional model by 2013, it proposes a more pragmatic approach in which individual payments per hectare would be flattened using a mechanism which would reduce the gap with 90% of the average regional payment for any farm by one-third by 2013. This of course is exactly the pragmatic mechanism the Commission has proposed to address the convergence issue.

The convergence issue is about finding a more acceptable basis for dividing up the direct payments budget between the member states. The flattening issue is more about trying to legitimise the continuation of basic income support to farmers after 2013 (the green payment would, by construction, be flat from the start). So despite the apparent consistency in approach, the logic for harmonising payments under the two measures is not the same.

But the Irish government claims there is considerable support for such a mechanism among other member states forced to move from the historical model. Whether the Parliament would see this as a sufficient reform to justify continued basic income support is another question.