One of the success stories in the evolution of CAP reform has been the change from supporting the product to supporting the producer by moving, first, from market price support to coupled payments, and then by decoupling these payments.
The 2013 CAP reform has reversed this process. Coupled aids have started to grow again, from a projected €2.7 billion in 2014 to a projected €4.8 billion in 2015, an increase of nearly 75%. Their share of total direct payments will rise from 6.7% in 2014 to 11.6% in 2015. This step backwards was one of the negative outcomes of the recent CAP reform. The limited data available raise the question whether the new coupled payments fully comply with the criteria set out in the new direct payments regulation.
Coupled payments in successive CAP reforms
The decoupling of CAP direct payments started in the 2003 Fischler reform (implemented from 2005), continued with the subsequent reforms of individual commodity regimes and reached its high point in the 2008 Fischer Boel Health Check. By the end of the Health Check implementation period, coupled payments had not completely disappeared but their share of total direct payments had fallen to less than 7% of the EU’s total direct payments
In the table below, coupled aids are included in the EU budget in Article 05 03 02 ‘other direct aids’. The additional amounts of aid refer to reimbursements under older regulations and have gradually disappeared over time. Two new articles were added in the 2014 draft general budget but have no influence on the evolution of the share of coupled payments over time.

The remaining coupled payments had two different legal bases. Some were a carryover from the partial coupling allowed under the Fischler reform. In that reform, for example, member states could continue to couple 25% of arable payments and 40% for durum wheat, 50% of payments to sheep and goats, 100% suckler cow premium and 40% of slaughter premium or 100% slaughter premium or 75% of special male premium. Some coupled payments for minor crops and processing aids also continued.
The 2003 reform also allowed member states to retain up to 10% of their previously coupled payment ceilings under Pillar 1 for specific supports to farming and quality production (Article 69 of Council Regulation (EC) No. 1782/2003). These additional payments had to be granted for specific types of farming which were important for the protection or enhancement of the environment or for improving the quality and marketing of agricultural products.
The 2008 Health Check integrated the partially coupled payments in the arable crops, olive oil and hops sectors into the Single Payment Scheme from 2010. Processing aids and most other coupled payments, including some specific payments in the beef sector, had to be integrated into the single payment scheme by 2012 at the latest. Following the Health Check, the suckler cow and sheep and goat premia as well as payments for cotton were the only formally coupled payments allowed after 2013.
However, the Health Check expanded the scope of specific payments under Article 69 (renumbered as Article 68 of Regulation 73/2009) while keeping the overall 10% share of each member state’s direct payments ceiling. Their purpose remained assistance to sectors or regions with particular difficulties but their use became more flexible. Specific aids could be used to help farmers producing milk, beef, goat and sheep meat and rice in disadvantaged regions or to support economically vulnerable types of farming.
In order to comply with WTO domestic support disciplines, support for potential trade-distorting measures under Article 68 was limited to 3.5% of national ceilings. This covered support for types of farming important for the protection of the environment, support to address specific disadvantages, and support for mutual funds.
Note that additional coupled payments could be provided in the new member states as complementary direct national payments. This scheme allowed the new member states to use their own national financial resources to add to the EU payments during the transitional period as EU payments were phased in (Bulgaria and Romania can make use of these payments in 2015, and Croatia until 2022). Because these payments were nationally-financed and of a transitional nature, they are not taken into account in this post.
The breakdown of expenditure on EU coupled payments in the 2015 draft budget (prepared before member states reported their choices with respect to the voluntary coupled payment scheme (VCS) included in the 2013 CAP reform) is shown in the following table. It shows Article 68 specific payments accounted for almost half of the total, following by coupled payments to the suckler cow herd, POSEI special payments to the EU’s outermost regions (“Programme d’Options Spécifiques à l’Éloignement et l’Insularité”) and cotton area payments. 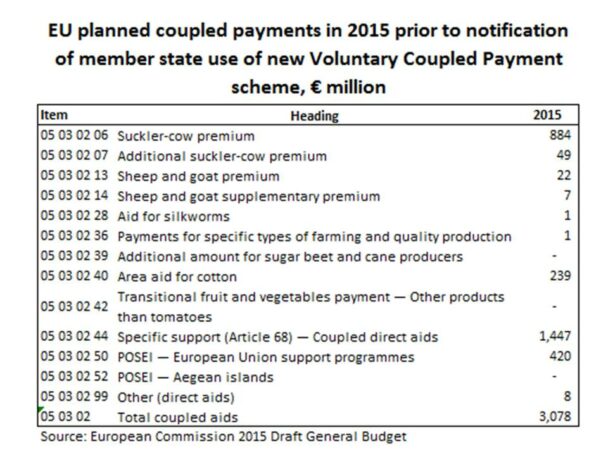 Coupled payments in the 2013 CAP reform

The 2013 CAP reform altered the framework for coupled payments. Because Article 68 specific aids were abolished, some replacement had to be found. The new framework has the following characteristics (Title IV of Regulation (EU) No 1307/2013):
• The list of sectors eligible for coupled support payments is greatly expanded (cereals, oilseeds, protein crops, grain legumes, flax, hemp, rice, nuts, starch potato, milk and milk products, seeds, sheepmeat and goatmeat, beef and veal, olive oil, silkworms, dried fodder, hops, sugar beet, cane and chicory, fruit and vegetables and short rotation coppice).
• Total support should be limited to 8% of each member state’s direct payments ceiling, or exceptionally 13% in those countries applying the SAPS scheme, or where member countries had used more than 5% of their direct payments ceiling in any year during 2010-2014 for coupled payments including Article 68 payments. These percentages could be increased by up to 2% if this support was used for protein crops. A further derogation allowed member states which used more than 10% of their national ceilings for coupled payments including Article 68 payments in any year between 2010 and 2014 to be permitted to use more than 13% of their national ceiling for coupled payments “upon approval by the Commission”.
• Member states had to notify their decisions to the Commission by 1 August 2014. However, member states can revise their decisions with effect from 2017, either increasing, decreasing or ceasing the amount of coupled support they provide within the relevant limits.
Importantly, all voluntary coupled payments within these ceilings should comply with a number of conditions, as follows:
• Coupled support may only be granted to those sectors or to those regions of a Member State where specific types of farming or specific agricultural sectors that are particularly important for economic, social or environmental reasons undergo certain difficulties.
• Coupled support may only be granted to the extent necessary to create an incentive to maintain current levels of production in the sectors or regions concerned.
• Coupled support shall take the form of an annual payment and shall be granted within defined quantitative limits and be based on fixed areas and yields or on a fixed number of animals.
The last bullet point means that future coupled payments would qualify as Blue Box payments under the WTO Agreement on Agriculture disciplines on domestic support.
Member state choices on the use of coupled support

DG AGRI has summarised the choices made by member states with respect to the flexibilities allowed in the 2013 CAP reform direct payments regulation. Based on this summary, the positions of member states in their use of the voluntary coupled support scheme both with each other and with their past practice is shown in the following table. 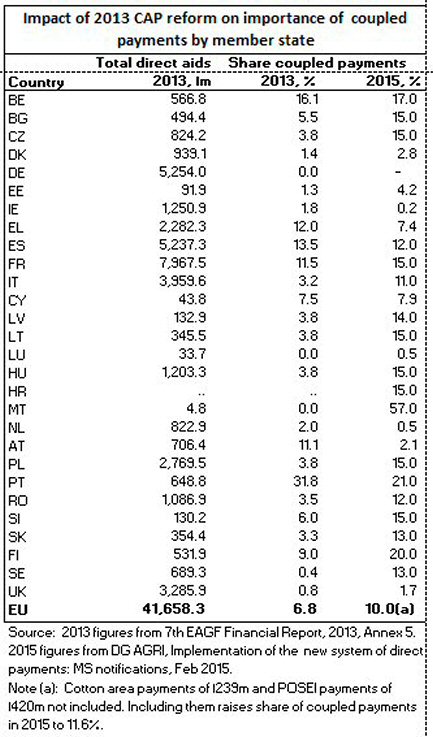 The generous ceilings in the new direct payments regulation and the choices made by member states mean that coupled support will increase significantly in 2015 compared to recent years. While the distorting impact of these choices (both with respect to those sectors in other member states which are not subsidised as well as for third countries) will be limited by the requirement that the coupled payment schemes should be production-limited, they nonetheless represent a backward step in the historical process of CAP reform.
Some final questions remain. It is not clear whether all of the payments meet the relevant criteria in the regulation that the sectors must be important for economic, social or environment reasons (hardly a constraint, as a member state can make a case for any sector) and must be undergoing certain difficulties (which would presumably manifest themselves in falling production) and that the support should be limited to maintaining current levels of production but not create an incentive to increase production (although this can really only be checked ex post).
Somewhat surprisingly, the Commission summary notes that DG AGRI does not approve/disapprove the notifications and member states remain the only responsible of the decisions they have taken in implementing the reform, except in the case where the VCS is more than 13 (+2)%. Surely the Commission has a wider responsibility to make sure that member states comply fully with the regulation as a whole? Certainly, this is something I hope the Court of Auditors will examine in the near future.
We should also bear in mind that member states get a second bite at the cherry before August 2016 and that, conceivably, the share of coupled payments could be increased after 2017. DG AGRI should be prepared to be more aggressive in checking whether all coupled payment schemes meet the regulation’s criteria at that stage.
This post was written by Alan Matthews.