Further details on the Commission’s expectations for the EU sugar market following the end of sugar quotas in 2015 are contained in its market outlook to 2020 publication published last month.

In my own review of the legislative proposals I argued that the Commission’s decision not to propose an extension to the sugar quota regime after 2014-15 is a part of the 2013 CAP reform, on the grounds that this was the first time that the Commission had made its intentions clear. But formally the Commission is correct that the current legislation expires in September 2015 and would require a positive decision to extend it.

In my review I was surprised at the limited impact of removing sugar quotas that the Commission was projecting. This is confirmed in the sugar market balance projections to 2020 published in the market outlook. This balance sheet refers to centrifugal white sugar only. It does not account for other sweeteners (isoglucose), nor does it include sugar used for bioethanol (whether use for other industrial processing such as in the manufacture of medicines and enzymes is included is not clear) which is currently supplied from out-of-quota sugar. With sugar beet one of the top feedstocks for ethanol production in the EU, increased utilisation of sugar beet for ethanol in line with the overall increase in demand for ethanol is also projected. 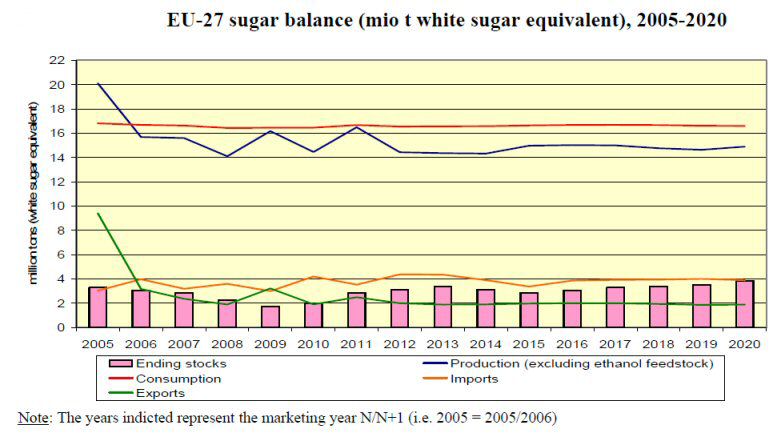 It is striking how steady the market balance remains over the projection period. Sugar processing is expected to remain largely unchanged from its current level. Since the EU sugar reform, the EU has turned from a net-exporter into a net importer of sugar. Despite the expectation of relatively high prices and the end of production constraints following the expiry of the quota system, it is projected that the net-trade position of the EU will not change much during the projection period. This implies that the EU import market will still be available after 2015 for those developing country exporters that currently meet this demand.