They have come together in support of new ‘joint position’ for the future of the CAP. It is based around seven core principals. At its heart is a recognition that agriculture policy should be reoriented towards supporting the active land management practices that are needed to protect the landscape, the environment, preserve biodiversity and ensure for the long term Europe’s capacity to continue as a major producer of food.

The joint position stresses the need for a common European policy backed by money raised at a European level on the grounds that many aspects of land management require a cross border approach, e.g. water basins that span national boundaries, wildlife species that migrate long distances and seas that lap on the shores of more than one country. Moreover, within a the European common market for food, policies that have a bearing on food production should not operate in a way that distorts free competition. Birdlife and ELO also argue that solidarity among European nations of widely different levels of affluence and a shared concern for the future of the unique European tapestry of landscape and rural heritage is justification for a common European policy financed from a common budget.

The joint position is frank in its admission that despite a measure of evolution since it was founded in the early 1960s and some changing rhetoric, when it comes to how the €55 billion a year of CAP money is actually spent, it is still “a policy tuned to supporting agricultural commodity production”. It goes on to argue that the CAP must leave behind its commodity production past and embrace to a future in which “public expenditure matches, as much as possible, the delivery of public benefits which are vital for achieving both food and environmental security”.

Birdlife has been a pioneer of the “public money for public goods” mantra that looks certain to dominate at least the semantics of the upcoming CAP reform debate, if not the actual policy content. (Public goods have a very clear definition in economic theory but the term is increasingly thrown around without much precision, even by those who should know better, such as three analysts from the IEEP, who in a recent report, define agricultural public goods so widely as to remove any analytical power from the concept.) That a big, mainstream farm union like the ELO should throw its weight behind the public goods argument, and nail its flag to the Birdlife mast, is a significant achievement for the conservation group. It also suggests that the ELO has made a strategic calculation that the public money for public goods will be the defining logic of the next CAP reform, and it is better to get ahead of the argument than be left behind.

Making the opposite strategic choice is the UK’s National Farmers Union which is perhaps not surprising since the NFU’s main competition for members comes from the ELO affiliate the Country Land and Business Association (CLA). With Birdlife and the CLA even putting in a cordial joint appearance on the influential BBC Radio 4 Today Programme, the NFU’s Tom Hind reacted angrily to their joint position, dismissing the public goods argument as ‘naive’ and ‘old school’. For the NFU, the recent volatility of food prices means the next CAP reform should see the policy sharpen its focus on boosting commodity production. Some might regard this as a ‘pre-school’ approach.

Today the NFU issued a further reaction in the form of a press release in which its President Peter Kendall denounces the Birdlife/ELO position and reaffirms the NFU commitment to a CAP aimed squarely at commodity production and cheap food. Over the past few years successive NFU leaders have made the case for remuneration for public goods provided by agriculture (even the NFU’s EU-level partner COPA/COGECA has begun talking in these terms). So this more traditional perspective brings the NFU much closer to the positions taken by continental farm unions like the FNSEA in France.

Putting the UK sideshow to one side, the joint position sets out some of the policy implications of the high level argument for a CAP aimed at long term environmental and food security. It argues that High Nature Value farming, for example extensive grazing livestock farms, is badly neglected by the current CAP and should get a much larger share of taxpayer support, at the expense of more modern, resource-intensive and commercially-viable production systems such as feedlot livestock-rearing and monoculture cereal farms. During the question and answer session of the launch of the joint position in the European Parliament, I put it to Allan Buckwell, policy director of the ELO, that the plan would involve a major redistribution of subsidies and this could be politically toxic. Buckwell was admirably frank in agreeing that the plan would involve significant redistribution of support and made it clear the ELO was not in the business of defending the current allocation of CAP funds.

For a statement from a leading European farm union, the ‘joint statement’ is remarkable in that its contains the weakest possible defense of the market mechanisms (support prices, intervention buying and export subsidies) and direct aids of the first pillar of the CAP:

“Pillar 1 has certain strength in its relatively administrative simplicity and in the strong element of certainty and revenue stability it gives farmers.”

The ‘joint position’ contains no reference to measures to ensure price stability nor does it argue for the continuation the current system of direct income support for farmers. However, it is implicit that paying farmers for the provision of public goods does provide them with a valuable new income stream to supplement what they get from the marketplace. Both Allan Buckwell and RSPB’s Gareth Morgan made this point during the question and answer session.

Nevertheless, it is striking that first pillar of the CAP, which still takes up well over three quarters of the current budget, is well and truly hung out to dry. The joint position states that the mechanisms and measures of a reformed CAP “are likely to show more characteristics of the current CAP rural development and agri-environment measures than current support measures”. These characteristics are listed as follows: (1) a contractual basis of payments that lists the public goods the recipient of public funds is expected to produce in return for the public money paid, (2) transparency of both the funding and the contractual commitments, (3) targeting of specific outcomes and results that are quantifiable and measurable, (4) monitoring of performance and adaptation of policies in the light of outcomes, (5) accountability of recipients of EU funds and the national and regional authorities responsible for implementing EU policies and spending EU funds. 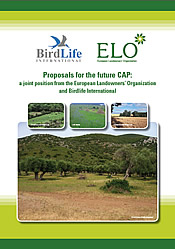 It is a sign of changing times that the ELO and Birdlife International are able to see eye-to-eye on the fundamental principals of a new CAP. In my view, they are on the right side of most of the big issues and the ELO has clearly stolen a march on the more traditional farm unions who would prefer to line up in defense of the status quo. My colleague Valentin Zahrnt has argued that BirdLife is makinge a mistake geting into bed with the ELO. I disagree. It’s not possible to achieve radical reform of the CAP without buy-in from the more progressive of Europe’s farmers and land managers.

Either way, there is no doubt that this will be seen a very important intervention as this year’s debate on the next CAP reform gets going. Read the joint position here

3 Replies to “ELO and BirdLife fire the starting gun”