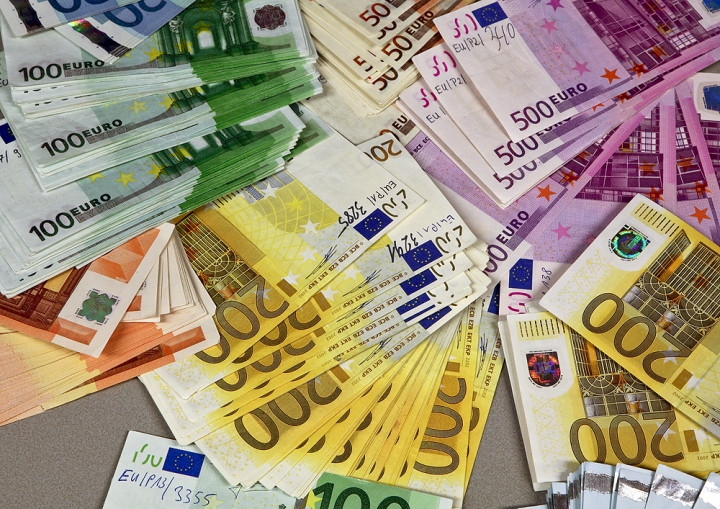 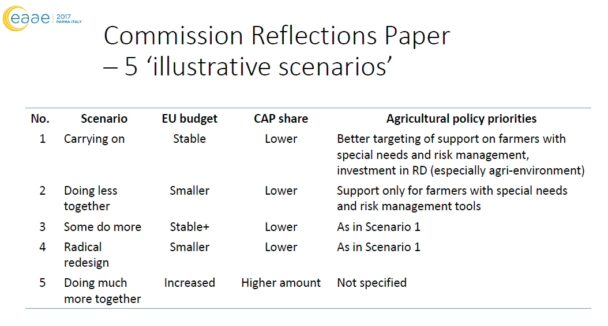 Another wrinkle is whether the Commission will propose, and whether the European Council would determine, that there should be a further move towards external convergence, i.e. the levelling of direct payments per hectare of eligible area between Member States. Even without any cut in overall CAP funding, this would further reduce Pillar 1 payments in some older Member States but would increase them in some of the newer Member States.
For the purposes of this discussion, let us assume that a reduction in the CAP budget occurs. The European Council must then decide how to distribute this reduction across Pillars 1 and 2 of the CAP (note that this decision is for the European Council and does not depend on the progress of CAP legislation). Would it decide to make the cuts disproportionately in Pillar 1 payments, or conversely (as happened in 2013), would it decide to disproportionately cut Pillar 2 payments?
Member States are likely to hold different views on this issue. One reason is that one way to offset cuts in the Pillar 1 budget on transfers to farmers would be to introduce co-responsibility and national financing for these payments. This option is one mentioned specifically in the Commission’s Reflections Paper. Some governments (e.g. Germany?) might well be attracted to the idea of a lower CAP Pillar 1 budget if they were given permission to make national payments to their farmers to make up the difference. Other countries, conscious of the additional strain this would put on their national finances, would be likely to reject the introduction of national co-financing for Pillar 1 payments and seek to maintain the level of Pillar 1 spending in the CAP and to make the reductions disproportionately in Pillar 2 payments.
Another factor likely to influence Member State positions is that the relative importance of Pillar 1 direct payments and Pillar 2 rural development payments differs across Member States (see diagram below). For France and Belgium, Pillar 1 payments are well over 80% of their pre-allocated funding under the CAP, while for countries such as Romania, Austria and Slovenia they account for less than 60% of their total CAP payments. Other things equal, the latter countries might be happier to make cuts in Pillar 1 payments (which would have less effect on them) and conversely, countries to the left of the diagram would be happier to see cuts fall predominantly on the Pillar 2 budget. 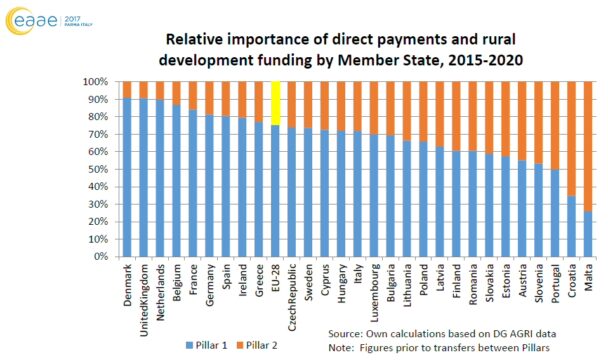 One way to resolve this dilemma would be to merge Pillar 1 and Pillar 2 payments into a single pot for budget allocations (this would not prejudge whether we retain the two-pillar structure in operational terms). The European Council moved towards this solution when agreeing the 2014-2020 MFF in that, while pre-allocating specific amounts to each Member State for Pillar 1 and Pillar 2 spending, it introduced the possibility, within limits, for Member States to move funds from one Pillar to the other. One prediction might be that this flexibility will be further enhanced in the next MFF, simply in order to facilitate an agreement on the CAP budget in the MFF.
Conclusions

In this post, I have argued that we are unlikely to see substantial revisions to the CAP basic legislation until well into the next decade. The Ciolos reform is likely to last for a decade, despite the dissatisfaction with the outcomes of this reform among stakeholders from all sides. On the other hand, farmers and paying agencies may be relieved that further fundamental revisions to the structure of the CAP are postponed for a further six or seven years, given that there is a value in itself to policy stability.
This does not preclude the possibility that the Commissioner might be able to push through a CAP-lite revision if it focused on just one or maybe two issues. Currently, a public consultation is underway on improvements to the food supply chain, in the wake of the Agricultural Markets Task Force report, with a view to deciding if a legislative initiative is needed. Such an initiative early next year, if introduced, might well be successful in passing even in the limited time available, given the high degree of convergence of views between the Parliament and the Council on this issue. One could imagine other single-issue initiatives, such as on generational renewal, or focusing specifically on changes to the Rural Development regulation to give greater emphasis and priority to climate action, also succeeding in the limited time to March 2019.
However, I have also argued that farmers will face a very different world from 2021 on because of the budgetary context even in the absence of any comprehensive revision of the basic CAP legislation. There is mounting evidence, including most recently the scenarios set out in the Commission’s Reflections Paper on the future of EU finances, that there will be a significant reduction in the CAP budget in the next MFF. If this occurs, it would be accompanied by a major debate within the European Council on how to allocate this reduction between the two Pillars.
Member States are likely to hold very different views on this question. The simplest way to resolve these differences might be to further enlarge the flexibility of Member States to transfer EU resources between Pillars. On the last occasion, this led to a net increase in the resources available to Pillar 2 (relative to the European Council’s initial proposal which cut Pillar 2 resources disproportionately more than Pillar 1). The outcome the next time round, it seems to me, remains wide open at this stage.
Paradoxically, farmers might well hope that the European Council fails to reach agreement on the next MFF in time for it to enter into force at the beginning of 2021. Under the Treaty rules, in the case of no agreement on a new MFF before the end of the previous MFF, ceilings and other provisions corresponding to the last year of that MFF are extended until agreement is reached. This would mean that the ceilings on CAP expenditure would remain as under the current MFF rather than be reduced as is likely under the next MFF. Resources under these ceilings would have to be activated under the annual budget procedure but, in principle, a delay in agreeing the next MFF would allow CAP spending to continue at current levels for a little longer.
My full presentation to the EAAE organised session on the economics and politics of the CAP after 2020 is available below.

Economics and Politics of the CAP after 2020 from Alan Matthews

4 Replies to “The budgetary context for the CAP after 2020”