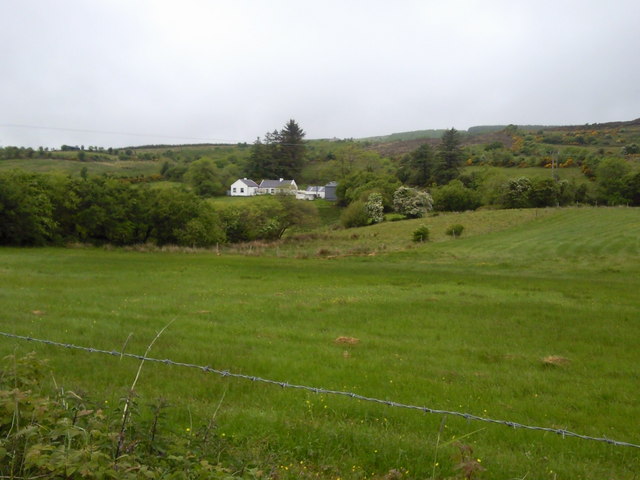 The article below was published in the Irish Farming Independent on Tuesday 17 May (the original article can be read by clicking on this link and choosing the ‘Continue to use Press Display’ option). The article addresses the high dependence of Irish agriculture on public support, but the question I raise has, I think, wider relevance for other EU member states as well. With expectations growing that the June Agricultural Council may announce yet another aid package for the agricultural sector, my question is whether there is a vision for European (and not only Irish) agriculture in which this heavy dependence on public support for income in the sector can be reduced.

“Farm incomes are back in the news again, with milk prices in particular having fallen from their record levels in early 2014. Although Teagasc economists were projecting a further growth of 5% in family farm income in 2016 at their annual Outlook conference last December, this figure will be revised downwards in the light of more disappointing milk returns than expected in the first half of 2016.

Nonetheless, Irish family farm income has been positively buoyant in the past five years compared to the previous five years (see table). The expected fall in 2016 will be nothing like that experienced in the horrible years of 2009 and 2010. Also, the fall in income in 2016 will be cushioned by an allocation of €13.7 million from the EU dairy crisis fund agreed last September, an amount which can be doubled by the national government. 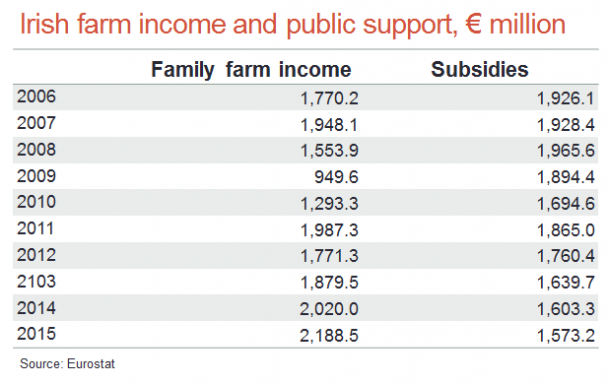 The table also shows the importance of public support to farm incomes in Ireland, principally the Single Farm Payment (now the basic payment and greening top-up) but also including payments under rural development programmes. These subsidies have been much less volatile than family farm income, although they show a gradual decline over time. This reflects in part the impact of the 2013 CAP reform which reduced the overall national ceiling for direct payments, as well as smaller payments under rural development programmes in recent years.

Nonetheless, it is noteworthy how stable public support to farming in Ireland has been despite the enormity of the crisis in the Irish public finances as a result of the financial crisis and bank collapses in 2008, and which led to major cutbacks in public spending in other sectors.

The column showing the value of public support to farming is labelled ‘subsidies’ because this is the technical term used in the national accounts – ‘other subsidies not related to production’. Some of these payments remunerate farmers for the production of public goods when paid through agri-environment programmes funded by the Rural Development Programme, although counted as subsidies in the national accounts. But these are only a tiny part of the total. Most of the expenditure is indeed a pure subsidy to farmers simply because they are farmers.

The importance of these subsidies relative to family farm income should give anyone pause for thought. In all of the past ten years, these transfers from taxpayers have contributed the bulk of family farm income and in four of the ten years they exceeded the income that farmers have made from producing the milk, beef, cereals and other products of farming. In other words, the market return from farming in Ireland is marginal and in many years negative.

Farm organisations will point out that these payments are partly to compensate for higher costs of production in the EU due to the high standards of food safety, animal welfare and environmental management demanded of farmers. They also argue that market prices are depressed because of the imbalances in market power along the food chain.

Indeed, increasing farm margins in the food chain is the top priority for the IFA President Joe Healy in his role as the new Chairman of the Copa-Cogeca Food Chain Working Party. On the other hand, there are additional costs of farm production (in terms of poorer water quality, poorer air quality, larger greenhouse gas emissions and loss of biodiversity) which if reflected in market prices and in the national accounts would tip the scales in the other direction.

But, when is enough enough? Farm groups are now calling for additional support for farm incomes in 2016 because of difficult commodity markets. But family farm income is already almost totally dependent on public subsidies. Are there not progressive voices in the farming industry who worry about this trend and feel a responsibility to reverse it? Is there a vision for Irish agriculture in which targeted public support continues to play a role but to a much less significant extent?

7 Replies to “When is enough taxpayer aid enough?”